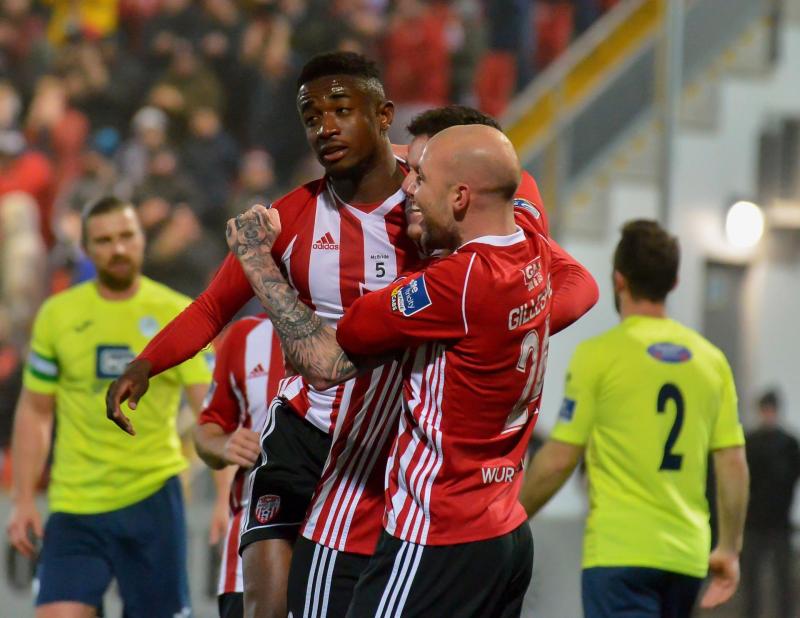 Junior Ogedi-Uzokwe has admitted that he considered a return to Derry City having spoken to the club about coming back to the Brandywell.
There was widespread surprise and dismay among Candystripes fans at the weekend when Sligo Rovers announced that they had signed the former City forward, who finished as the Golden Boot winner in his one season with the club in 2019.
With City short on attacking options following the departure of Tim Nilsen, City are light in attacking options, and the return of Junior would have been a great boost ahead of the resumption of the season. It wasn't to be however, with Junior admitting that he chose the Bit O'Red for a new adventure, despite having held talks with Derry.
“Derry was definitely an option,” he revealed.
“I love Derry, the people and I loved my time there. I just felt I needed a new adventure. Derry was an option but I went for something different in Sligo.
“We did have a chat. At the time, when we did speak, I didn't know if I was coming back to the League of Ireland.
“We spoke maybe around a month ago but I wasn't sure at that time. Because of the whole coronavirus I didn't know what was happening, I didn't know what was happening with football.
“The team in Israel wanted me to come back as well so I was just waiting. We did have a chat and it was all positive from Derry, but it just didn't happen I guess.”
The Candystripes added forward James Akintunde to the squad at the weekend, who happens to be a neighbour and a good friend of Junior in London. Akintunde has since admitted that he opted for Derry City on Junior's advice.
“I spoke to him before anything happened with Sligo,” Junior said.
“We spoke about Derry. At one point I was thinking about going back there myself. James has never played abroad, always England, so it's something new for him and hopefully he can get going and score some goals as well. I told him how great a club Derry is and I told him about how I enjoyed my time there so he was really excited to go there.”
With his time in Israel cut short, Junior was not rushed into a decision before making the move to Sligo, but a return to the league where he made his name was a key factor, even if it will not be with the same club.
“I just feel hungry now, that I want to get out there and actually play the game,” he explained. “It's something that's very exciting. I enjoyed it in Israel. I played around four games and I was getting into it. I think we had eight games left to play, and I was just finding my feet but then the whole Corona thing happened.
“I couldn't just stay there and wait for it to all die down so I decided to come back and spend time with my family. I didn't feel comfortable being out there because of the coronavirus but I did enjoy my time there, although it was short.
“My best football was played when I was at Derry and when I was in Cyprus. Winning the Golden Boot was the biggest achievement of my career. I had a great time at Derry and really enjoyed it there.
“I spoke to the manager (at Sligo) and it just sounded interesting. They are ambitious and it's a new challenge for me so I just thought that maybe it would be an interesting move for me.
“It is a good challenge.”