Many say it's the best result in Derry City's history. Well, it happened 14 years ago tonight

Brandywell side stun Europe with victory over Swedish giants 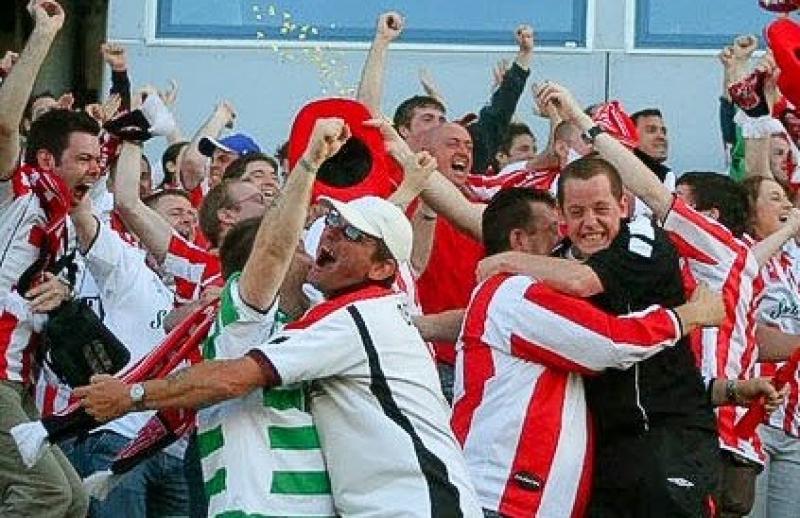 The world has changed since the events of July 13, 2006, but the impact of Derry City’s incredible victory over IFK Gothenburg is still savoured by the club’s fans, especially those few fortunate to be in attendance at the Ullevi Stadium.

Arguably Derry City’s greatest ever result, the win over Gothenburg kicked off a journey that captured the hearts and imagination of a city, a ‘European Dance’ that will forever be remembered amidst a season only eclipsed by the 1989 treble win.

The game between the Irish minnows and the Swedish giants, who had, just years earlier, been competing with the likes of Manchester United and Barcelona in the Champions League, was expected to be a formality with Gothenburg player Niclas Alexandersson allegedly uttering the words – ‘It will be a nice holiday for us when we got to Ireland’ – or words to that effect.

Such was the dismissal of Derry City as a threat, that there were no television cameras at the game and photographers were very few in number.

Local photographer Kevin Moore was at the game however, and he was the only one to capture the moment when Sean Hargan headed the ball into the Gothenburg net with just ten minutes remaining.

To this day it remains the club’s most famous goal – but it could well have been someone else’s goal, had Darren Kelly got his way.

“There was a striker for Gothenburg that a lot of clubs were interested in,” Kelly recalls.

“He was like Mido who played for Spurs, with that type of build. He was picking me up from set-pieces. The thing was – if Hargy hadn’t scored that, I was right behind him to put it in. When we played in the Brandywell, the same thing happened. I was behind the same forward and ready to put it in, but he handled in.

“There was a wee bit of a joke about it, the fact that I was behind him to put it in but I was always a team player, as long as we scored that was the main thing. I remember the jubilation at the end – the support we always had at away games, especially in Europe, was unbelievable. We were in with the crowd and seeing so many faces you know. I still have the pictures in a big scrap book I have which is something I hold very, very dear.”

Walking onto a pitch that had its own sense of history only added to the occasion for the Derry City players and staff – a relatively unknown Brazilian teenager lighting it up during the 1958 World Cup in Sweden.

“I remember the whole build up to it, the fact that Pele had played there in the Olympics,” Kelly continues. “I remember walking onto the pitch and thinking ‘Bloody hell, Pele was here’. The big thing for us was this, and it might not even be true, it might have been a great bit of psychology from Stephen Kenny, I don’t know – but there was talk about Niclas Alexandersson had said it was just a matter of turning up, that we were effectively going to be walkovers. That gave me personally a great form of motivation myself.”

By 2006, there was a change in the tide in the matter of Irish performances in Europe, with Shelbourne showing just a year earlier that minnows could compete at that level.

“We took confidence in Shelbourne and we were thinking ‘let’s not sell ourselves short,” Kelly agrees.

“The big thing was being full time because you were able to compete with them from a fitness point of view. The summer football aspect would have helped as well because you would have been playing during the season while the other leagues were in pre-season. The most important thing of all was that we had a great side who really looked after each other.

“I’ve played in teams with great players but they weren’t really a team and that’s something I always try to build, even now, as a manager, is to have good players who are good team mates with each other.

“Even with Stephen Kenny, who is a fantastic man, I don’t think there was a special remedy for what he’s done, he’s just great at managing people, and that’s what he did with us. The thing with Kennso is that you never really knew where you stood with him so he would always get the best out of you. He wouldn’t be the most talkative but he would have little moments where he would talk to you. He had that fantastic ability to keep you on your toes.”

As shocking as the result was – every City fan can remember where they were when the result came through – it was thoroughly earned by Kenny’s Candystripes.

In front of 3,500 fans, Derry grew in confidence and tried their luck with efforts from distance from Ruaidhri Higgins and Barry Molloy early on.

The hosts emerged determined in the second half and David Forde had to be alert to push a header from Magnus Kihlberg around the post, but Gothenburg were relieved when Killian Brennan’s effort from distance crashed onto the top of the crossbar.

The game was still in the balance until the 80th minute when Derry ventured forward and won a corner. In a moment never to be forgotten by the small number of Derry City fans in attendance, Kevin Deery floated a corner into the penalty area where Sean Hargan jumped highest to send the ball back across goal and into the net. It was an unstoppable header.

With time running out thereafter, goalkeeper David Forde produced arguably his two best saves in a Derry City shirt, two world class saves in the space of a minute to keep Gothenburg at bay.

The Gothenburg players were frantic, the Derry City players were exhausted, and the final whistle, when it came, confirmed not only the club’s first ever European away win, but at that stage the biggest away win in Europe by any Irish club in history.

“You get 10 or 20 minutes into the game and I’m thinking ‘Are we paying that good, or are we playing that bad?’ Kelly remembers.

“I’m thinking that we can actually beat this crowd. The more the game went on the more confident we got and that set us up for the second leg because we knew what they were about after the first leg, we had that bit of psychological advantage. We had everything there, good players in good positions who looked after each other – like Barry Molloy who did the work in front of us. It still gives me goosebumps to be honest.

“When you play for your hometown club you get an extra 10-15% from somewhere, I’ve always believed that and that always stuck with me. As a Derry boy it always meant so much more to me.”