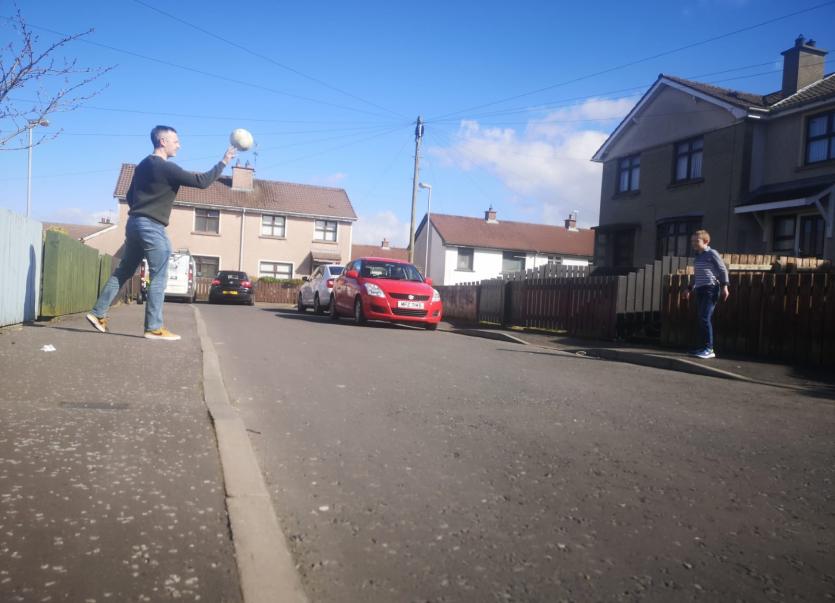 OLD SCHOOL... I did my best to rediscover my glory days, but it was a losing battle against my wains.

PADSY/KERBY – whatever you want to call it – for parents across Derry and beyond it could well be the difference between cabin fever and sanity in the next few months.
If the turn of the century and social media has one huge negative – it was the disappearance of the sight of wains playing outside. Gone are the days of rounding up your friends for a knock-out on the nearest piece of grass you could find. Remember headers and volleys? 60 seconds? Last Man standing? How about playing as if you were your childhood idol whilst the sun beat down and the grass stains got on the knees of your jeans. That meant that you got your arse warmed for you by your ma because the grass stains were hard to get out. I was Mark Hughes day in and day out and was the one who could be often found trying to score overhead kicks of the 'Sparky' variety.
It wasn't just football. If you fancied a game of rounders, you welcomed anyone and everyone, and if it wasn't sports related, it would have been a game of Knick-Knock, which involved knocking on some poor neighbour's door and making a run for it (the more enraged they were, the better).
Another classic – Pomp Pomp, involved one person standing with their eyes closed at a lamp post whilst everyone else hid, with the purpose of returning to said lamp post to free yourself. Speed was your friend in that game, a clown who never went further than ten feet from the lamp post was the enemy.
The common denominator was that we were all outside playing, all day every day, and there wasn't an evening passed when someone was called in for their bed and there began vociferous negotiations across the street 'MAMMY, CAN I JUST HAVE ANOTHER 5 MINUTES?'. Glorious days. Really.
To kids today, it's an alien concept.
This coronavirus craic is no craic at all, but it has made me, as a parent of two wains that would rather stay in watching TV than breathe fresh air, dig deep for creativity.
With the sun shining, I took the two of them to Malinhead on Friday, and whilst I feared they would be bored within 17 minutes, they actually had a ball of a time, both simultaneously and spontaneously developing an interest in amateur photography. That shared interest gave way to a miracle of sorts as well – they stopped narking at each other.
It was glorious peace, for them. I was having all sorts of panic attacks because they were getting far too close to the cliff edges for my liking. Of course they were nowhere near them, but my eyesight isn't what it was and if I said 'Careful' once, I must have said it 300 times. Mortality hits you right in the face when you become a parent – and that irrationality never leaves you. I still check them to see if they're breathing at night, and probably will until they get their own places.

Highlight
Malinhead was great, and the fresh air did a number on them as they were wrecked when they got back in the car. Yet the real highlight of the day came before Malinhead, when I took them outside for an old school game of padsy.
Now, you may call it padsy, or you may call it kerby, either way, you know what I'm talking about. What you may not remember is that it is brilliant craic and in these scary times, a life saver.
The rules are simple, and perfect for social distancing, if that's your thing with your own wains. One person stands on one side of the road, facing the other, each taking turns to throw a ball. If it hits the opposite curb you get 10 points and you get to stand in the middle of the road for possible 5-pointers.
It is simple and it is fun, but if you're a competitive sort, it also scratches that itch. Finding myself losing badly to my 12-year old daughter, I opted for desperation, turning my back and throwing it over my head in the hope of a 20-pointer.
I also found myself hoping for the Ultimate shot - throwing the ball over a passing car and hitting the curb to win the game outright - the fabled 100-pointer.
Those shots are for the talented or desperate, and I was the latter. Not once did I succeed. But sure at least I tried, with my daughter feeling more and more sorry for me with every beating.
I did manage to claim a victory over my son, but that was neck and neck as well, and I have a feeling that he, like his sister, pitied the old fool and gave him a sympathy win.
I discovered two things playing a game I played a thousand times as a Ballymac youngster – My 5-pointer game is now atrocious, and that's even with my glasses on. Also, a persistent leg problem prevented me from bending down to pick up the ball with any grace at all. If there was ever a sign I'm getting old, it slapped me right up the face in those moments.
But enough griping – my leg is sore, my hair is grey and my eyesight is shot, but the smiles were on my wains' faces, and that's all that mattered. I left them playing amongst themselves whilst I talked to a neighbour about the worry affecting us all.
They played on, innocently, competitively and obliviously.
That's all that mattered.
They were kids being kids.
Like we all were at one time.
All you need is a ball.