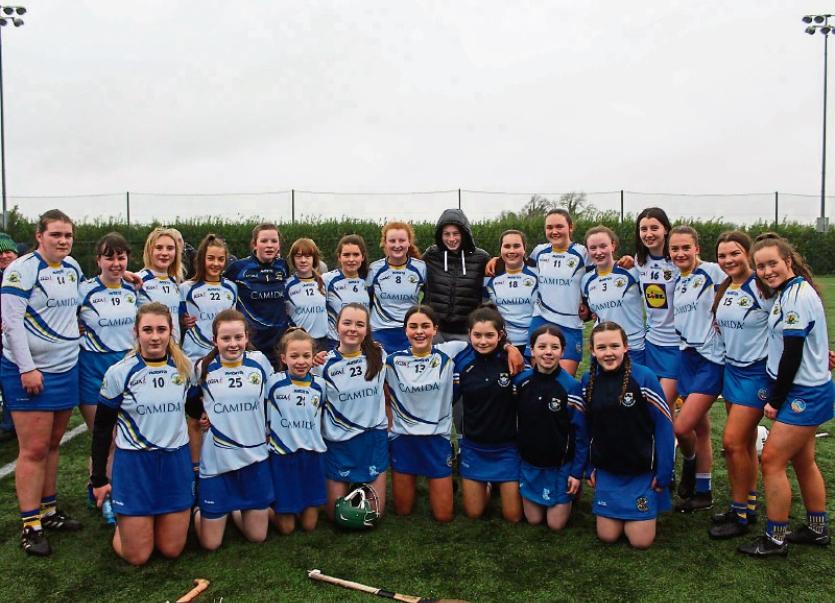 On Saturday last ,  March 7 in Heywood Community College’s 3G pitch the Coláiste added another All Ireland title to go with the All Ireland 7’s won in October 2019. Several members of that squad formed the backbone of this junior winning squad.

From the throw in Coláiste’s players started in similar fashion to the semi-final. The use of space and pace had St. Michael’s on the back foot. Niamh Costigan who went on to be the Tesco ‘Player of the Match’ blitzed the opposition with numerous fast paced runs throughout the match. Aisling Ryan settled Coláiste’s nerves at centre-forward early on and would go onto to contribute 2-6 to her team’s overall tally with a textbook performance of power, speed and scoring prowess, displaying what a centre-forward should do in front of goal.

Kacey Meehan at full-forward as in all her performances in this year’s campaign terrorised her opponent and would finish the game with 3-3 and be the Colaiste’s highest scoring forward this school year. Hannah O’Gorman came on at half back and put the shackles on St. Michael’s only forward to offer any attacking option.

As the first half progressed it was obvious that St. Michael’s were struggling. Coláiste were having the better of their opponents in all positions. Despite playing their semi-final against the Ulster champions in Breffni Park’s 3G pitch the previous week it was the Coláiste who adapted to the artificial surface much quicker.

With Captain Rebecca Burke giving a commanding performance at centre back. Every St. Michaels attack was repelled by Coláiste’s stoic backs and resulted in a Coláiste counterattack with a subsequent score every time. Goals from Kacey Meehan, Emily Coffey, Aoife O’Neill, Aisling Ryan and Katie O’Connor saw a half-time lead of 6-9 to 1-1 at the break.

In the second half it was St. Michael’s turn to make use of the strong breeze. But they failed to capitalise on this and left Rebecca Burke free to mop up any attack. Leah Flannery and Emily Coffey constantly ran at their opponents. Molly Purcell gave a commanding performance at half back as did Leah Caplice before being replaced. Katie O’Connor at midfield came more and more into the game, catching several high balls and striking directly into the heart of St. Michael’s full-back line.

St. Michael’s managed two points in the second half but the full back line marshalled by Ava Caplice with Eabha Lambert and Emma Guthrie ensuring no one got within striking distance of Abby Noonan in goal. Goals from Niamh O’Farrell, Emily Coffey, Kacey Meehan and Aisling Ryan meant there was going to be no comeback for the team from the Royal County.

Niamh Costigan capped off her player of the match account with two points. Caoimhe O’Mahony, Rebekah Coughlan, Holly Keating and Caoimhe Costello came on as substitutes and gave good account of themselves. But when the final whistle came there was no disputing who were the winners in this final.

With the scoreline reading 10-14 to 1-3 great scenes of celebration spilled onto the pitch!

The girls were fantastic ambassadors for their school, their clubs Cahir, Ballybacon Grange and Brian Boru’s and their county throughout the year.

Many thanks to all the supporters and staff who made the journey to Laois to witness another chapter in the history of camogie in the Coláiste.