City take the lead but still lose out at the RSC 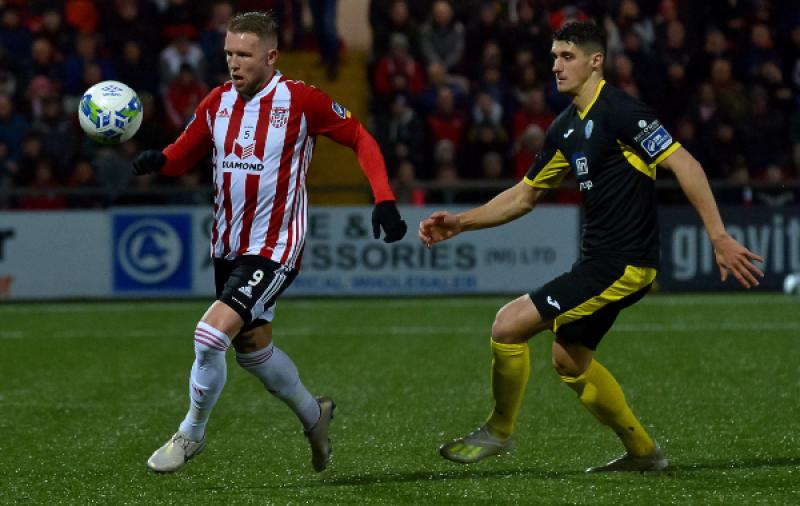 Tim Nilsen was a frustrated figure in Waterford this evening

Derry City fell to a last gasp defeat as Shane Griffin struck in injury time to send the Candystripes home from the RSC empty-handed.

The Candystripes have failed to win at the RSC since 2007, and they didn’t look likely of ending that run as they were second best for the majority of this game in what a disappointing showing from Declan Devine’s team.

It was all Waterford in the first 25 minutes but Derry City could well have taken the lead out of the blue when Walter Figueira bamboozled Tyrkee Wilson with a superb piece of skill to break into the area, before driving a shot across goal which beat Brian Murphy but just passed the post of the Waterford goalkeeper.

At the other end Michael O’Connor as causing the City defence all sorts of problems and he did well to evade Eoin Toal on the half hour before firing in a wicked shot which Peter Cherrie did well to hold.

The home side were stunned just past the half hour though when Colm Horgan won a free kick and with the hosts reacting too slowly, Derry took the kick quickly and Mallon raced into the area and caught Murphy out with a fine finish to give City the lead.

The home side took a while to respond but they hit back just before half time when Derry failed to clear from a corner kick and Cummins set up Sam Bone on the edge of the area and he fired an unstoppable and brilliant shot past Cherrie and into the top corner to bring the home side level.

Waterford started the second half as they started the first and took the game to Derry, coming close when John Martin twisted and turned in the box but shot straight at Cherrie.

The home side kept pushing and they came close again when Coote dummied a free kick 18 yards from goal and O’Connor curled a brilliant effort towards goal only for Cherrie to get two hands to the ball to push it behind for a corner.

Waterford looked more likely in the remainder of the game and they won it deep into added time when Shane Griffin lashed the ball into the net to send the Candystripes crashing to a deserved defeat.