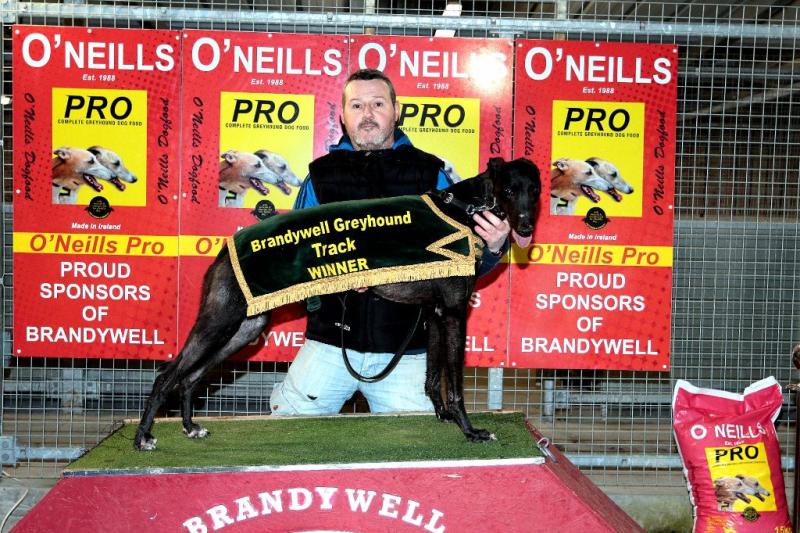 The Brandywell faithful were treated to another winning display on Monday night as in-form Barney Rockon surged to his 11th win in 16 starts.
Racing out of trap two for Dominic McGarrigle in the Emir Levry Chiropractor Spint, the 4/5 favourite just edged out Farloe Maverick by half a length in a pulsating concluding contest on an eight race card. Aughaboy Lizie was third, a mere length further back.

Impressive
The opening Brandywell Track Monday Sprint saw young prospect Titanic Joy putting in a very impressive run to cross the line in 16.75 with four lengths to spare ahead of Sniper Jamie while Beepers Olivia was third.
The second race saw five runners going to traps in the O’Neill’s Greyhound Products 300, and here Anita’s Lady obliged to head off the challenge of Church Road by a length, winning in 16.93.
And there was another good time in the third race over the same distance as Longrange Dawn did 16.91 to win by almost nine lengths with the rest of the field hampered by congestion on the first bend.
The next four races were all over the 500 yard distance.
Race four was won by Highview Merry, who just got the better of Townsend Carol, in 28.27,while in the fifth, Walletbuster Ray was two lengths ahead of Cash for Aussie, in a fast 27.95.
Cal’s Picnic won a five dog sixth race in 28.12 with more crowding on the first bend.
The penultimate contest saw the evens-money Culdaff Lady coming out on top in 28.23.

Ardnasool Jet
Meanwhile, fresh from his award as 'Sprinter of the Year' for 2019, Ardnasool Jet, was welcomed to the Brandywell on Monday where he was paraded in front of racegoers. He was of course celebrating this second 'Sprinter of the Year' award having also received the same honour for 2018.
Owned by Adrian McGhee, and trained by Peter Cronin, Ardnasool Jet, began his career with some great runs in Lifford, but has run most of his races in Shelbourne Park and Dundalk.
The career winnings now amount to in excess of €50,000.