'We've been waiting for this performance all season'

Brilliant City of Derry storm their way to victory over Tullamore 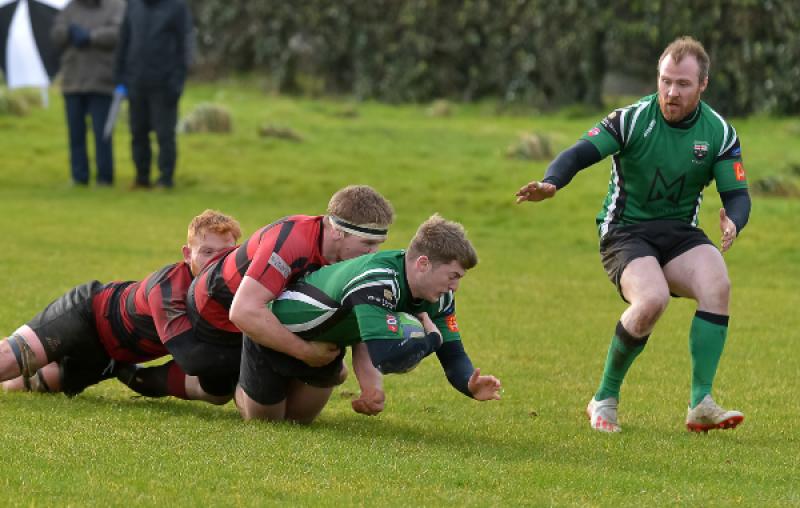 City of Derry secured an important win over Tullamore . Pics by nwpresspics

Rain, hail and wind battered the players at Judges Road today, but it was City of Derry who did the real damage as they blew Tullamore away with a performance filled with determination, precision and composure to pick up five very valuable points.

There was real pressure on the hosts today after struggling in their defeat to Bangor last week but they really stepped up, so much so that Tullamore, in third place and fighting for promotion, rarely laid a glove on them.

Derry hit three tries in the first half and one early in the second to leave their opponents dazed.

The first came just five minutes in, Neil Burns racing through a gap in the Tullamore ranks to not only score, but give Alex McDonnell a simple conversion.

The lead was doubled just ten minutes later and again there was nothing Tullamore could do as the consistently brilliant David Graham racing clear, with McDonnell completing the conversion for 14-0.

Tullamore hit back almost immediately when Ciaran Ennis forced his way over, but with the conversion then missed, Derry still had the advantage.

The half ended with a sustained period of Derry pressure and Simon Logue finished the job from an attacking scrum, racing right around and through the despairing Tullmore players, and with the conversion following, Derry went into the break 19-5 up.

Derry were playing into the wind from then on, but crucially they struck first with the brilliant David Lapsley scoring within ten minutes of the restart, securing not only the try bonus but the victory. From there, Derry controlled the pace and direction of the game, leaving coach Richard McCarter delighted at full time.

“The all-round performance, especially in those conditions, was superb,” he said. “Playing with the wind in the first half you nearly put pressure on yourselves to build a lead, but we were composed and that’s what I loved about the performance from the first to last minute.

“We never looked panicky, we scored three brilliant tries in the first half and then e backed it up in the second half. We had to defend a wee bit but I thought we could nearly have increased our lead at times rather than any threat of them coming back. To a man every one of them was superb and it was a brilliant result.

“We have been waiting for this performance for a while and that has while it has been so frustrating for me, because I work with these guys week in and week out and I know how good they can be. The ceiling is so high for them in terms of potential and I’m just so happy that today we were able to show how good we can be. This is a stepping stone, we can be better and we have to now back it up.”