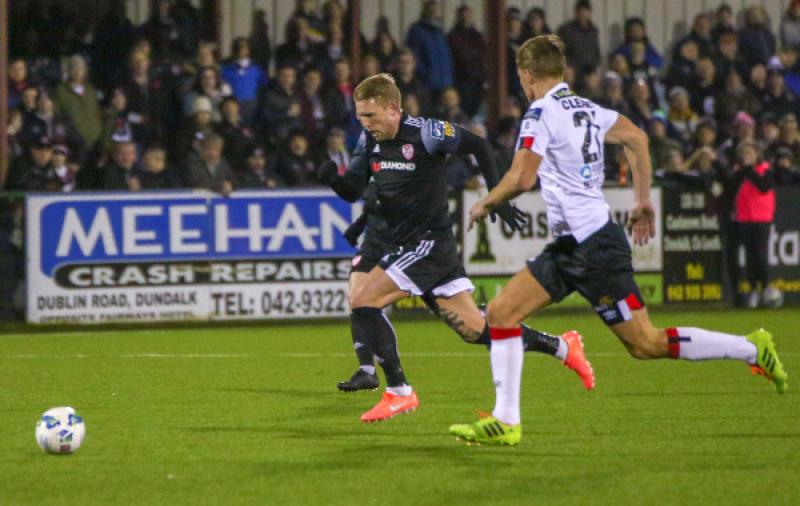 Derry City lost out to a late goal as they fell to champions Dundalk on the opening day of the new league season.

It was an all too familiar tale for the Candystripes against Dundalk, as they stayed in the game and frustrated the hosts, only for one lapse in concentration to cost them dearly, with Dane Massey striking the winning goal just ten minutes from time.

City had started the game well and signalled their intentions early on by winning a corner in the opening seconds. Dundalk were caught out as Jamie McDonagh drifted to the ball to the edge of the area where Ciaran Coll was arriving unmarked. The ball fell invitingly for the full back but he sent his volley well over Gary Rogers’ crossbar and the chance was gone.

The Dundalk crowd finally came to life just nine minutes in when Pat Hoban played the ball into the path of Dane Massey who went down in the penalty area under the slightest of touches from Jamie McDonagh. The fans roared for a penalty but referee Neil Doyle waved away the Dundalk appeals, without cautioning Massey who went to ground too easily.

It was all very untidy for both teams as they tried to settle into their rhythm, but City created a serious chance on 20 minutes when a simple long ball forward found Nilsen onside behind the Dundalk defence. Gary Rogers was off his line and stranded somewhat but crucially Nilsen failed to bring the ball under his control and the chance was gone as quickly as it appeared.

The second half started with more intent from both teams and both came close. The home fans were almost on their feet when Daniel Kelly fired an effort at goal that had Cherrie but his brilliant effort smacked off the frame of the goal.

Chances were now coming at both ends and Dundalk needed Gary Rogers to save them as Jamie McDonagh broke down the right and his precise cross found Nilsen who headed downwards, but his effort was somehow stopped by Rogers at point blank range.

Pater Cherrie then had to produce the save of the night as Cammy Smith turned and curled the ball over his head towards the top corner, but the City stopper stuck an important hand up to turn it over the crossbar.

Derry’s resilience was finally broken on 80 minutes as a corner by Jordan Flores into the heart of the penalty area found Dane Massey unmarked and he hooked the ball past Peter Cherrie to give the champions the win.