Make mine a DOUBLE - Three Times

Owners Kevin O’Kane, John Joseph Porter and Raynond Heaney all had good reason to smile on Monday as the trio each recorded a double on the eight race card. 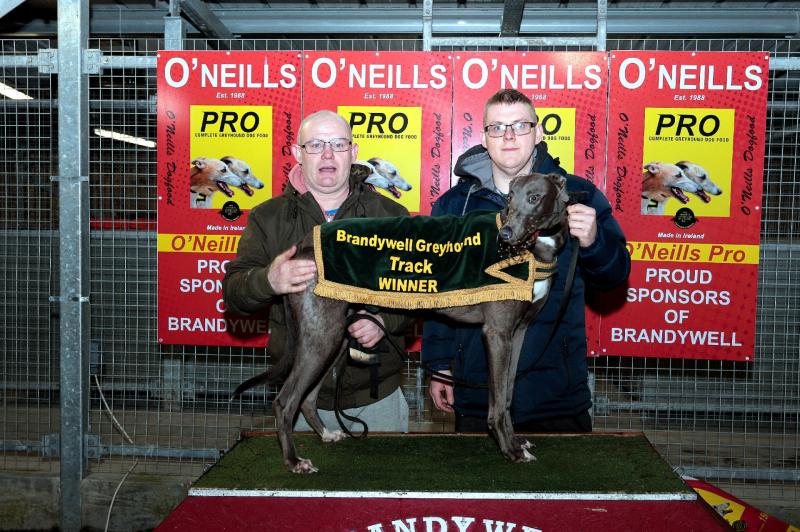 Owners Kevin O’Kane, John Joseph Porter and Raynond Heaney all had good reason to smile on Monday as the trio each recorded a double on the eight race card.

O’Kane, after a relatively quiet spell of late, saw Sniper Ria register a superb 16.63 run to win the Brandywell Track Monday opening sprint by a whopping eleven lengths after the rest of the field ran into bother on a crowded first bend.

The double was completed in the fourth race when Knock Dazzler obliged in the feature race, the Track Lotto 500 Final.

Racing out of trap one, he had three lengths to spare, clocking 28.23, to win ahead of Bannside Ninja with Chas book, the 4/6 favourite, back in third.

Townsend Beauty came up trumps for the kennels of John Joseph Porter and Eamon Porter by winning the third race, a sprint, in 16.96.

And Townsend Carol then did the business in the fifth, the Happy 10th Birthday Skinny Genes 525, going over the line in 29.51, almost five lengths clear of Kathy’s Song.

Summer Sparkle won the second race in 17.14 for Raymond Heaney, and there was more good news for him in the final race as Summer Stripe pipped Coologue Ragner by three-quarters of a length.

The closest contest was in the sixth race as Walletbuster Ray pipped Fleetwood Fagan by a short-head to win in 28.01 over the 500 yard distance.

The penultimate race was another close affair with Pistol Whipped getting the better of Do It Hate by a head in 28.49.

Not just one double but 2 . The Sniper aka Kevin O Kane after a quiet spell comes out tonight at the Brandywell and wins with KNOCK DAZZLER from trap No 2 in a time of 28.63 In the Track Lotto 500 Final. 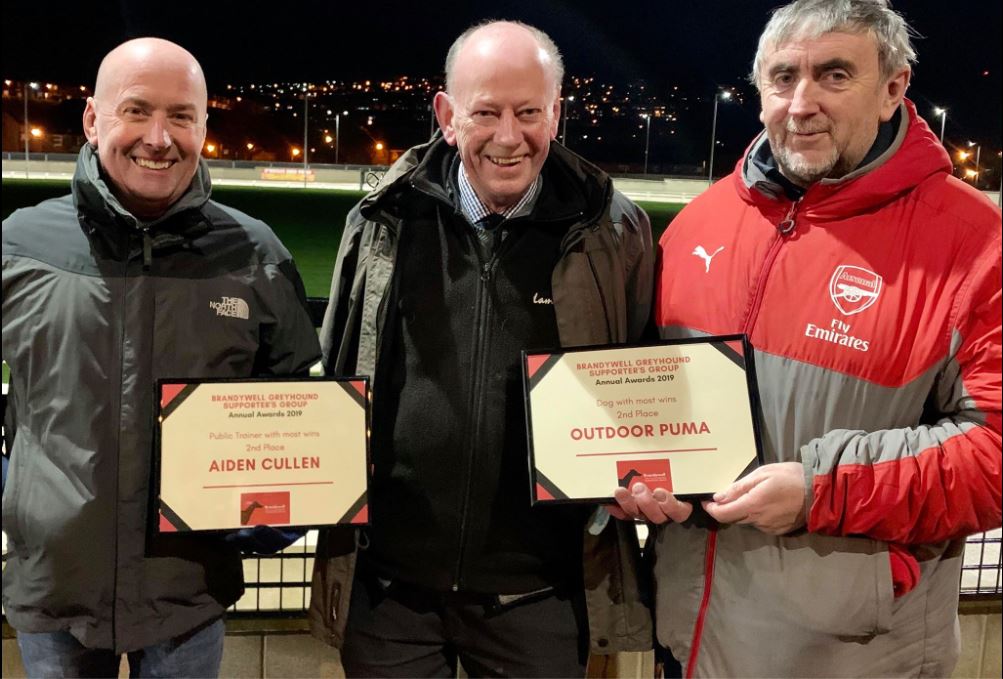 In centre Mr Sean ( Rattler ) Radcliffe on behalf of the Brandywell Greyhounds Supporters made the presentation to Kevin himself on the left. Kevins son Kealan O Kane is on the right of the picture. Earlier on in Race No 1 The Monday Night 300 Sprint they also won with SNIPER RIA from trap No 4 in a flying time of 16.63.

Not to be outdone, we also had the kennels of Mr John Porter and his son Eamon Porter from Strabane come out in Race No 3 and win with TOWNSEND BEAUTY in a time of 16.96 in the 300 Yds Sprint. Eamon is pictured here with TOWNSEND CAROL who won The Happy 10th Birthday Skinny Genes 525 in a time of 29.51, completing their double as well.

In Race No 7 The Brandywell Monday Night 500. It was won by PISTOL WHIPPED from trap No 4 in a time of 28.49. From left we have Mr Gerry Mc Gettigan with brothers Darragh & Ryan Mc Granaghan.