No reward for City of Derry despite brave effort 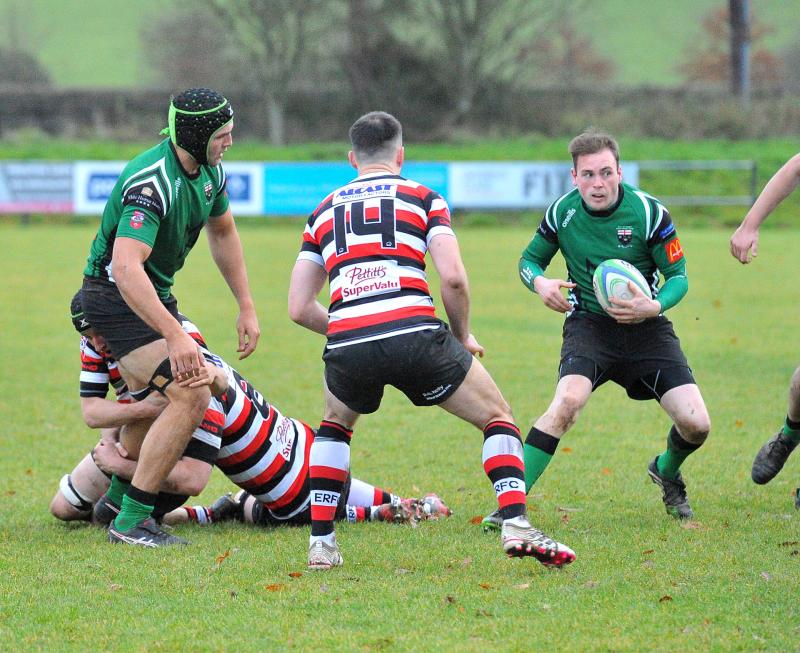 There is plenty to be optimistic about for City of Derry despite defeat to the legaue leaders at the weekend.

Despite a brave effort, City of Derry came away from the home of the league leaders empty-handed at the weekend.
Derry, buoyed by the last gasp win over Middleton two weeks ago, travelled to Wexford to play Enniscorthy who had suffered a shock defeat to Bangor recently, more with hope than expectation.
A resurgent and confident team took to the field and began by far the stronger and more determined. The intensity was there from the beginning, the tackles were flying in and Enniscorthy knew they were in for a battle.
The first key moment in te game went against Derry however. Stephen Corr anticipated a pass and when the player was used as a decoy, Corr, who was already fully committed, was unable to prevent a thumping tackle, and was shown a yellow card as a result.
This appeared to galvanise the Derry side however as the 14 found another gear and really put it up to Enniscorthy.
With the visitors applying the pressure, a wayward kick out of defence was gathered by Tiernan Thornton who feed Davy Graham and once in behind the opposition off loaded to Thomas Cole who finished in the corner, much to the delight of the large contingent of travelling support. This period of play silenced the home crowd and you could sense an upset was possible.
The league leaders were never going to take this well and moments later were awarded a scrum penalty just outside the 22 in centre field. With Derry back to full strength and the game at 3-5 it was finely balanced.
Enniscorthy were made to work and only after a significant amount of possession and territory they got their excellent off loading and quick recycling moved Derry all over the park when they eventually created the overlap.
Leading 10-5 Enniscorthy were beginning to find their rhythm and after more concerted pressure and quick recycling extended the lead to 17-5.

Half Time 17-5
The second half and Derry quickly freshened up the squad by utilizing the bench for maximum impact, getting right back into the game.
Similar to Derry’s opening try it was good pressure forcing a wayward kick that saw Rico Schneider gather and immediately attack. The quick recycle and Derry moved the ball wide and any one of three players could have scored but Davy Graham was on hand to touch down, and Mc Donnell converted to reduce the deficit to17-12.
What often happens in rugby is that you are vulnerable just after scoring and when a defensive line kick was blocked Derry were on the retreat, a scramble defence and ground was lost. The resulting lineout close to the Derry line allowed the very excellent Enniscorthy line out to set up another attack which was finished in the opposite corner for the home team's third score. It was now 22-12 as the conversion hit the post.
The 4th try came of a well worked lineout catch and drive with a few minutes to play and it seemed that Derry were out of it at 27-12.
To their credit, the visitors continued to play well and forced the game. They kept going and when good link up play between forwards and backs released winger Daire Walker to score in the corner on the 79th minute, Mc Donnell converts to give a glimmer of hope that a bonus point was still alive.
However, following the restart Derry could not maintain possession or gain ground to give themselves a penalty chance to get within the losing point range. Instead the ball was moved wide and Enniscorthy knew to bundle player and ball over the line to end a really good game of rugby with the score 27-19.