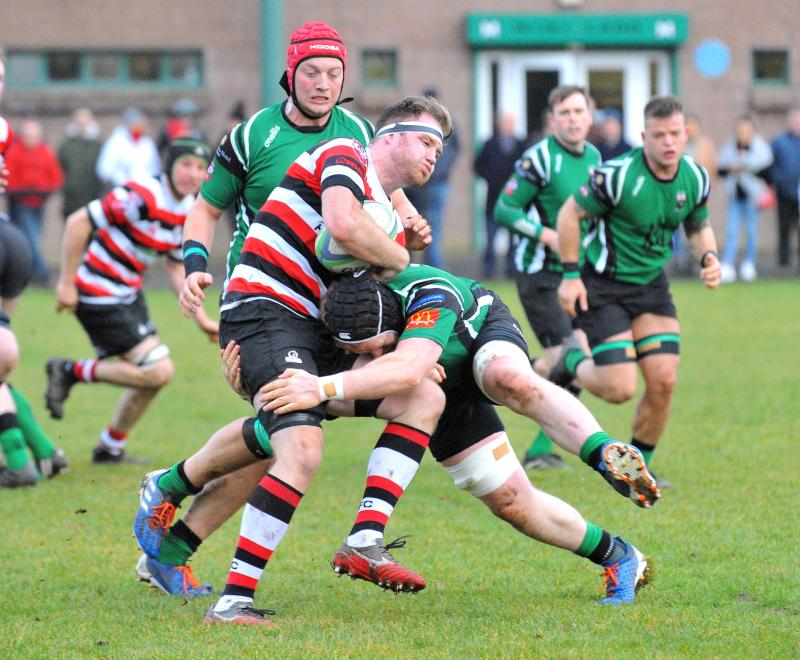 City of Derry have a tough task against league leaders Enniscorthy this weekend.

It has been two whole weeks since arguably the most bizarre weekend in the season, and City of Derry are hoping for something similar as they bid to upset league leaders Enniscorthy this weekend.
Simon Logue's last gasp try against Midleton dragged Derry over the line in dramatic circumstances at Judges Road, whilst elsewhere, relegation-threatened Bangor were defeating Enniscorthy, showing that in this league, in this season, anything really can happen.
Derry coach Richard McCarter felt the impact of the last game perhaps more than most, the late winner after a frustrating day taking its toll, but when the dust had settled, his team had four important points on the board.
“Usually when you win in the last seconds of the game you expect to be completely euphoric but I personally wasn't really because it was just that kind of a day,” he explained.
“It was frustrating in large parts and to win it at the end was more relief than anything. If we hadn't won it, it would have been a real disappointment and a real setback for us so all the emotion of the 80 minutes got to me a wee bit at the end and that's the first time that's kind of happened. It was nice to get the four points don't get me wrong, but hopefully with other games left now in the season we can get through more comfortably.
Derry are one of four teams on 19 points and it as yet hard to predict which way the remainder of the season will go. The bare minimum is staying in the division, but a play-off place is still very much in sight.
It's a really weird table because we are five points off the bottom but only three points off top four,” McCarter agreed.
“It is a game where you get away with not playing your best but it was so important to get the four points and that's the way it's going to be for the rest of the season. You can try and get perfection every game, but it's pretty unlikely that's going to happen, but at the end of the day it is about just getting over the line and winning whatever way you can and that starts again this weekend down in Enniscorthy.”

PRESSURE
The league leaders are under severe pressure from Skerries at the top of the table, and having won 8 from 10 league games so far, they will remain big favourites against an opponent that has struggled for consistency. Nothing is certain in Division 2C however, and with Bangor showing that Enniscorthy are beatable, Derry have plenty of reason to be optimistic. McCarter in particular feels that his side can exploit their opponents and be more clinical than they were during a 17-43 defeat at Judges Road in December.
“Any team is beatable in our league and it really is about playing well on the day,” he added.
“I have watched the video of us playing against Enniscorthy at home and my gut feeling at the time and when I watched it the first time was that we were really poor that day. But, when I watched it again last week, the amount of chances we created wads frightening in the first half.
“We could have had three or four tries but we just lacked a real clinical cutting edge and that's what you need against there real top teams.
“If you don't take your chances you'll pay for it but if we can create the same chances again, I would like to think that we wiould take some of them. It's just about putting them under pressure and making them feel uncomfortable in the game and if we do that then you never know. They are definitely going to be big favourites so that maybe takes a bit of pressure off us but I do think we can get a bit of joy down there.”