Lethal Logue strikes at the death!

Pressure, possession, persistence- City of Derry had it all as they probed relentlessly at Midleton on Saturday. 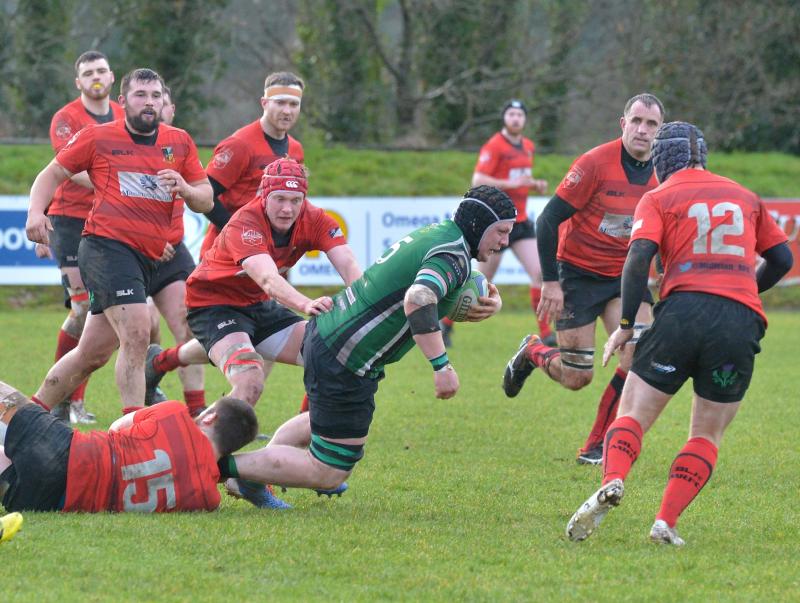 Pressure, possession, persistence- City of Derry had it all as they probed relentlessly at Midleton on Saturday.

But it all seemed for nothing and the foot of Division 2C beckoned, until Simon Logue produced arguably his most important moment in a City of Derry shirt.
85 minutes were on the clock and Midleton, disciple and stubborn throughout, thought they had done enough, clearing the ball away from one last Derry attack. But throughout that attack and unbeknownst to referee Marcus Casey, the touch judge had his flag raised for an indiscretion. A good two minutes passed – maybe more, as play went on, with the referee unaware, his attention only alerted when Midleton finally cleared.
A quick discussion with his assistant and the official awarded Derry a scrum, the finale of last chances for the home side who had been absolutely frustrated in this game, from minute one to minute 85.
Derry emerged from that scrum and moved the ball right, with David O’Hagan, Callum Lapsley and David Graham all involved. There were tired bodies and minds everywhere but Midleton stopped the hosts just inches from the line, or so they thought. Logue, alert throughout, gathered the ball and threw himself at the only available space left on the Judges Road pitch.
It was enough.
The whistle went, the referee’s hand shot up, and Derry cheers filled the air. They had done it. The conversion was then completed by Alex McDonnell, probably the most relieved man on the pitch, the stand-off missing a game-levelling penalty just minutes earlier, everyone in green looking on in horror as the ball struck the post and somehow stayed out.
It was a rollercoaster of a finish, and emotional to say the least, with coaches Paul O’Kane and Richard McCarter taking their time before they emerged for post-match interviews. No doubt they needed to gather their thoughts after such a draining conclusion to this game.
That said, the enormity of this win, given that both Bangor and Tullamore also won their games, cannot be underestimated, as Derry, seconds from last place, are now just three points from fourth place. This year’s Division 2C is unforgiving, with every point so crucial, four teams, Derry included, now on 19 points, with play-off ambitions or relegation fears appearing bigger one week to the next depending on the latest result.
“I just felt towards the end of the second half that it just wasn’t going to happen for us”, McCarter said afterwards. “We missed a kick in front of their posts with just a few minutes left, we were camped on their line for the majority of the second half and we just couldn’t get over it. But you have got to hand it to them, to stick at it and to get over the line with the last play essentially, there’ no better time to score and it’s game over at that stage. Loads and loads of credit go to them, but it was definitely heart in mouth stuff.”

Dominant
It was ultimately a very fortunate day for Derry who, despite knowing the importance of the result in this one, simply could not get out of their half in the opening stages; 23 minutes in fact passed before Derry crossed halfway, and even then that was short lived.
At that stage it was 3-0 to the visitors, thanks to an early penalty from captain Stuart Law, and Derry were fortunate it was just that, McDonnell’s penalty just after the half hour met with relief than anything else.

The stringent nature of this game was highlighted by Midleton’s decision to take on a penalty from just 5 metres inside the Derry half at the beginning of the second period. Lee took aim and sent his team into the lead again, and that gave the visitors something to sit on. Sit they did, they had do, as after Michael Cronin received a yellow card, Derry got on top, and stayed there for the most part. They had all the possession and all the pressure, but what they didn’t have was the key to unlock a defence that was hell-bent on keeping their lead. Derry’s decision making and sluggish passing helped them in their cause, but they were playing a dangerous game, relying on their solidity to keep Derry out, just as it had done down in Limerick just before Christmas.
Logue was in and out of the game, which didn’t help Derry, but switching him to scrum-half midway through the half gave him more influence and he attempted to inject some necessary pace into the game.
Just past the hour mark, it seemed that Derry had finally broken through with two men over, but a blatant knock down stopped them in their tracks. It was blatant to everyone except the officials, who were having an inconsistent day to say the least, and what should have been a penalty try was instead a scrum, much to the bemusement of the team in green, particularly David Graham who put his head in his hands in disbelief.
It was all going against Derry, and time was quickly slipping away. That was emphasised when McDonnell then missed a relatively straightforward penalty with just four minutes remaining. It was just not their day.
Defeat was stalking the sidelines, and last place was waiting with open arms.
Simon Logue ignored them both.