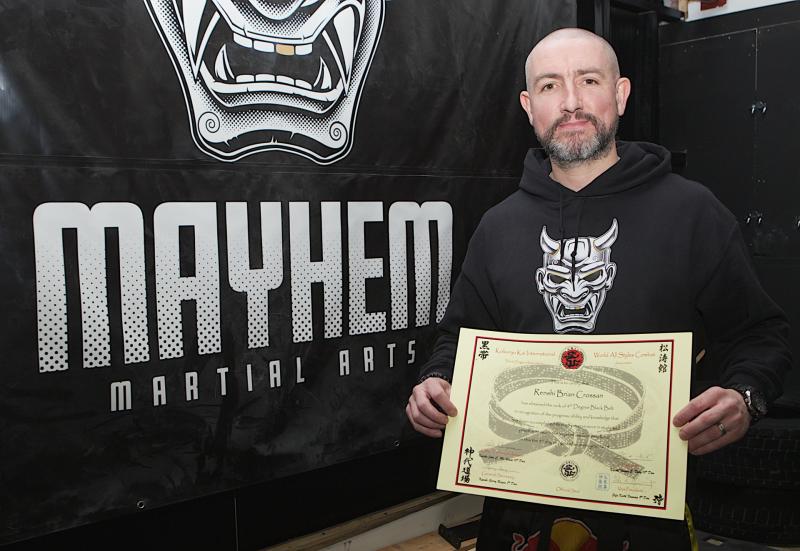 It has all been happening at Mayhem Martial Arts recently, with the club moving to new premises at Euphoria Fitness in Skeoge Industrial Estate, and with a new and renowned Muay Thai instructor in place, the club is now also expanding in more ways than ever before.
Adding to the good feeling at the club have been the achievements of the coaches and a number of students, all of whom were awarded dans of different levels after a recent trip to Kilkenny.
Coach Brian Crossan became a 4th dan, while Cathal Duddy was awarded a 3rd dan, William Duddy a 2nd dan and both Colin Duddy and Dominic Simpson were awarded 1st dans.
For Brian, it is the latest step in what has become a lifetime passion.
“I'm doing it now since I was young,” he explained. “We break for two weeks a year and that's at Christmas and that's it. Otherwise it's three or four nights a week.
“It's a hobby, but working full time with three wains and a wife at home my hands are pretty full.
“Kickboxing has been a major passion for me throughout the years and there is nothing that makes me happier than teaching and helping others.
“I coach the rest of the guys. We all went to Kilkenny in November and were graded by Tom Foley who is a 10th ten, a Grand Master. The guys who got 1st dan have been training with me for about five years so it's a big thing. If you put the time in it's going to come to you.
“Those guys very rarely miss a class, they are really dedicated and it's a big commitment for them.”

Mental health benefits for adults and kids
“Some people have this fear that someone is going to punch them but once they come in they realise it's not like that,” he continued.
“Nowadays there are so many options for people which is a great thing. A lot of people are coming for mental health.
“It's a great stress reliever, being able to take your stress out on a set pf pads or a punch bag. It's unbelievable.
“I tell people that there is no better stress reliever than hitting pads and exercising which in turn helps their mental strength among other things.
“We also have kids coming as well and they have graded as well in recent months.
“It's great for confidence building, learning self defence, discipline, respecting others and teamwork all in a safe and controlled environment while having fun also.”

New Muay Thai class
Mayhem have just started a new Muay Thai class which will take place at 7:15pm every Wednesday night at the club's new gym.
The class will be instructed by new coach Kru Mark Cannon, a knowledgeable and experienced martial artist. A native of Liverpool, Cannon has been training martial arts for most of his life. He first started training in the art of judo then karate. In 1988 he began training and fighting in Muay Thai under the tuition of Master Sken and Colin and Billy Heron.
In 1999, Kru Mark opened the Panthainarasingh camp in Liverpool and has trained many champions to date. Joining Mayhem is undoubtedly a real coup for the club.