It is now three games without a goal or a point for Institute who were second best against Linfield at the National Stadium yesterday. 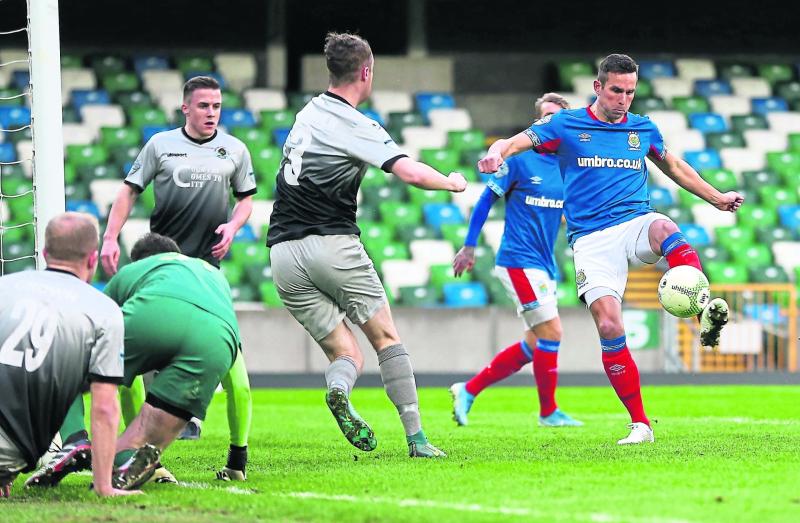 Linfield's Andrew Waterworth has a shot on the Institute goal during a one-sided first half.

It is now three games without a goal or a point for Institute who were second best against Linfield at the National Stadium yesterday.
Sean Connor's side havd endured a difficult December, picking up just one point from five league games, and the run was unsurprisingky extended yesterday, as David Healy's title challengers showed no sympathy for the team at the other end of the table.

The final score line could in fact have been a lot worse had it not been for the performance of goalkeeper Rory Brown, who produced a brilliant display between the sticks, denying Linfield time and time again.
This was the fourth time in six games that 'Stute lost by a three-goal margin and with only goal difference separating them from Warrenpoint at the foot of the table, it is worrying times for Connor and his players.

Holding firm
The 'Stute players could not be faulted for their efforts throughout, but with Linfield desperate for a win after three games without a win, there was no sympathy on show here, with the game all but wrapped up at half time thanks to goals from Andy Waterworth and Mark Haughey.

'Stuyte held firm in the early stages and denied the Blues the early goal they wanted, although the hosts came close on 12 minutes when Alex Millar's corner wasn't cleared efficiently and Haughley shot on the turn only for the ball to clip the top of the crossbar on its way over.
Bastien Hery, as usual, was looking to pull the strings for Linfield and he tried his luck from distance shortly afterwads, but his well-hit effort was well saved by Brown.

The 'Stute goalkeeper was called into action again midway through the half as another corner proved troublesome and Lavery met the ball with a bullet header but his effort was brilliantly parried away by Brown.
'Stute could not hold out however and they conceded yet another penalty when Cooper got away from Colm McLaughlin into the area where he was fouled by Dean Curry and referee Lee Tavinder pointed to the penalty spot. Waterworth promptly stepped up and fired Linfield into the lead.

That lead was doubled within minutes as 'Stute caved in completely. Brogan's initial effort was tipped over by Brown, but from the corner, Waterworth flicked on and Haughey turned the bal home from close range to make it 2-0.
It should have been 3-0 by the half time break, but again Brown came to the rescue, denying Cooper who should ahve scored, but regardless, Linfield were comfortable at the break, whilst 'Stute had a huge mountain to climb.

Half Time 2-0
The chances just kept coming for Linfield as Lavery broke clear on goal but with just Brown to beat he shot wide. 'Stute then had the woodwork to thank for keeping the score down as Millar's delivery was met by Haughey but his weffort bounced back off the post into Brown's arms.

There was little sign of any come back from 'Stute and the chances con tinued to come for the home side who were proving wasteful in front of goal, as Waterworth went one on one with Brown only for the 'Stute goalkeeper to come out on top again.
The third goal eventually did come and the superb Cooper created it as he raced away from his marker before cutting the ball back to substitute Jordan Stewart, whose close range strike was outstandingly kept out by Brown, but Lavery was on hand to turn home the loose ball in from close range.

Institute take a break from league action when they host Dungannon Swifts at the Brandywell in the Irish Cup this weekend. The teams palayed out an entertaining 2-2 draw when Swifts lasted visited 'Stute last month.