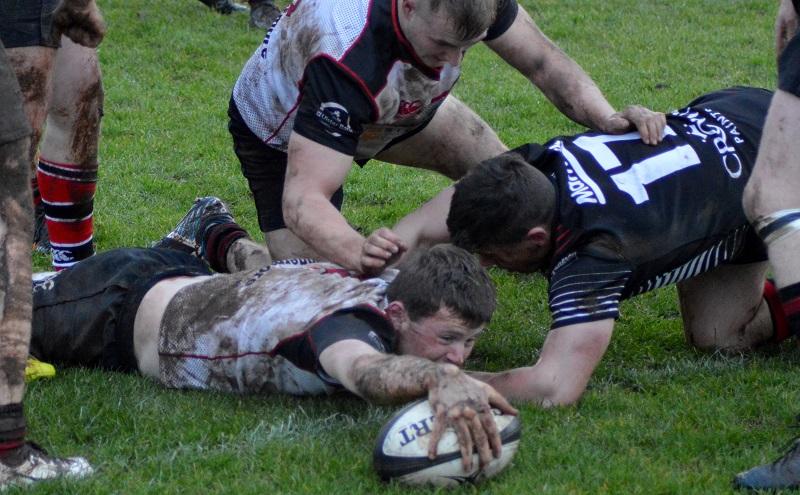 Although there was much about their performance to question, in the end they delivered the goods to run in six tries and register an emphatic victory.  They started and finished the match strongly, but for long periods of the first half they were a pale initiation of the team they have been all season.

Belying the muddy conditions underfoot Rainey started brightly, with Kearns sending Mulholland in at the corner after good work by the forwards. Five minutes later, McErlain barged over from short range through what appeared to be half of the Carrick pack, and when Kearns added the extras, Rainey seemed to be on their way to a comfortable win.

However, several personnel changes at half time injected a new lease of life and they attacked strongly down the left wing.  A few phases of forward drives drew in the opposition defence and when G. Hall at scrum-half sent the ball wide, Scullion was on hand to cross in the corner with an excellent finish.

Straight from the restart, Rainey seemed to be back to their old ways, making a complete mess of a simple catch and conceding a penalty to put themselves under pressure.  Stout defence came to their rescue, and they were soon back on the attack, Shaw charging downfield and releasing Mulholland to take play to the Carrick 22’.  Hastings drove for the line only be downed a metre short, but with a great one-handed stretch he planted the ball firmly over the line to secure Rainey’s bonus point.  Kearns converted.

Rainey were finally starting to fire on all cylinders, and despite Carrick’s best efforts, they were unable to break into the Rainey half.  Storming runs by Millar, Doherty, McIntosh and McErlain knocked the home side back on their heels, while Shaw and Mulholland tore up the defence, and it was no surprise when Hastings popped up on the wing to go over for his second try in the corner.

With the Carrick defenders visibly wilting, they did well to keep the Rainey onslaught at bay, but the pressure had to tell, and yet again, it was that man Hastings who delivered the goods.  Winning a lineout on the 22’ the forwards drove for the line, before releasing Kearns to scythe through the defence.  His offload was intercepted and Carrick thought the crises averted, but as a Carrick player attempted to run it out, he was hit by three Rainey tacklers, the ball scooted backwards over the line and Hastings reacted quickest, diving upon it to complete his hat-trick.

With the light fading fast, the ref called a halt to proceedings five minutes early to send Rainey into the Christmas break with a 17-point margin over their nearest rivals, Queens.