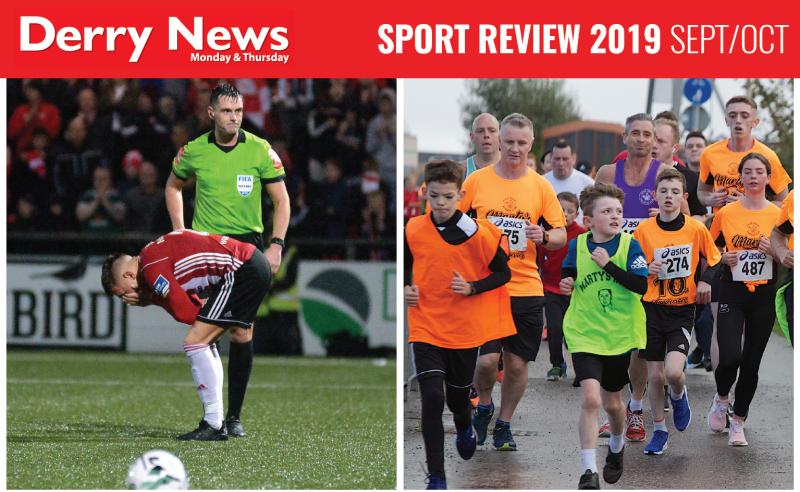 There was heartbreak for ten man Derry City as they lost out to Dundalk on penalties after a thrilling EA Sports League Cup final at the Brandywell.
David Parkhouse and Junior Ogedi-Uzokwe twice put Derry ahead, who then had Grant Gillespie sent off for two yellow cards.
Vinny Perth's side hit back through goals from Michael Duffy and Sean Gannon but failed to find a winner despite their man advantage.
It was a herculean effort from City as they pushed the league champions sll the way but their luck ran out in the shoot out on what was Declan Devine's birthday, with Ally Gilchrist and Jack Malone missing their spot kicks.
Chris Shields scored the decisive penalty for Dundalk in soaking conditions and scored to complete the first leg of what they hoped would be a treble.

Success for Lynch
Local legend Roisin Lynch secured the best result of her long career as she claimed the World Triathlon silver medal for her age group in Switzerland. Roisin – who turned 70 in July - also holds the silver for European triathlon.
Family and friends joined in a mayorall reception in celebration and Mayor Michaela Boyle took the opportunity to acknowledge Roisin’s contribution to local sport.
“Roisin is outstanding both as an ambassador for the city and as an example to women everywhere. Her achievements demonstrate what can be accomplished by anyone with the dedication and courage to pursue their dreams, and that no one should feel restricted by their age or gender.
“I hope Roisin’s achievements will inspire and encourage the next generation of young – and older - athletes to follow in her footsteps.”

OCTOBER - The legacy lives on

The popular Marty's Run 5km run and walk reached a significant milestone as it reached its tenth year.
The event is held annually in memory of Marty Gallagher, a much respected and gifted member of Foyle Valley Athletics Club who lost his life tragically in 2009.
Marty was a rising star in Foyle Valley and the local running scene. In November 2009, at the age of 25 years old, he was knocked down and tragically lost his life.
Since his death, the club, in connection with the Gallagher family and Paul's Butchers, have helped keep Marty's legacy alive with the 5K run/walk becoming more popular with each passing year.
The 5k accurately measured course has attracted all abilities and has raised thousands of pounds for local charities in Marty’s name

Derry delight
Derry City’s season ended in European qualification, a pitch invasion and the Golden Boot for Junior Ogedi-Uzokwe as the players in red and white put a final stamp on a season which will be remembered for all the right reasons.
The Candystripes dominated Finn Harps to get the one point they needed to secure fourth place and European football, with Junior scoring his second hat trick of the season to overtake Dundalk's Patrick Hoban in the race for the Golden Boot.