Not a time for the underdogs - August 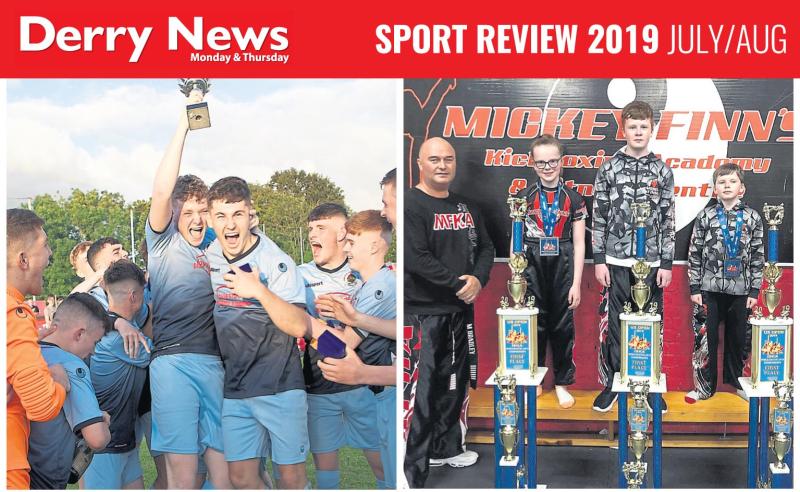 Another successful O’Neills Foyle Cup came and went in what was a Festival of Football played in glorious weather over six days. It was another record-breaking event that saw 424 teams taking part in 1,550 games in front of 135,000 spectators.
Once again the prestigious competition attracted major teams from across North America, Canada, mainland Europe, England, Scotland and Ireland.
There was great success for visiting sides with Partyick Thistle winning whilst Scottish sides Dundee United and Motherwell meet, with Fir Park men securing a 2-0 victory in the U13 final.
In the U15 section Derry City defeated Finn Harps in the final thanks to Luca Doherty’s second half goal. In the U19 category Institute beat Derry City when Tiernan McGuinness' late header won it. Kildrum Tigers lifted the U17 trophy courtesy of Shane Doherty’s winning penalty in the shoot-out win over Letterkenny Rovers.

McErlain resigns
Damian McErlain resigned as manager of the Derry senior football team after ten years in charge because of "personal circumstances".
The announcement followed Derry's defeat by Laois in their All-Ireland second-round qualifier at Owenbeg in June.
Derry failed to win an Ulster Championship game under McErlain, losing to Donegal and Tyrone in 2018 and 2019.

AUGUST - Not a time for the underdogs

Brigade duly retained the North West senior cup on Saturday afternoon after an emphatic 226-run win over Glendermott at Eglinton.
In truth it turned out to be a low-key final which saw the Beechgrove side opting not to enforce the follow-on with a 166-run first innings lead and the Rectory side responding with a turgid fourth innings reply.
The gulf that many felt existed between the teams in the run-up to the game was clearly in evidence throughout, with Brigade in such command that everybody bar Roy Torrens and Bertie Faulkner got an over in the second innings.

McCloskey kids take US by storm
Siblings Paul McCloskey, Anna McCloskey and Ryan McCloskey, who fight out of Mickey Finns Karate & kickboxing academy, starred on the world stage at the US Open in the summer.
All 3 kids took part in various divisions such as point fighting, light continous fighting, team divisions and also Clash fighting yet they all still won, carrying home the famous six foot trophies that the event has become known for.