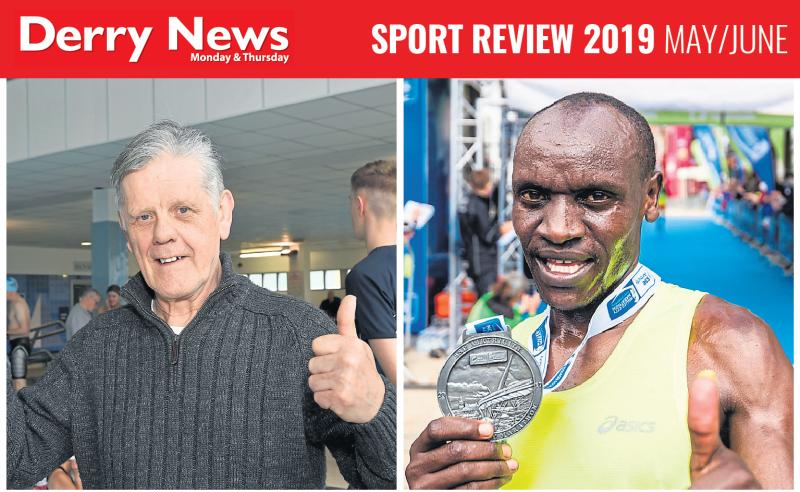 MAY -  Hitting the heights in May

Tyrone McCullough edged closer to a world title fight with victory over Alvaro Rodriguez.
WBO European champion McCullagh cruised to a comfortable victory over Spaniard Alvaro Rodriguez in Newcastle over 10 rounds.
Super-bantamweight McCullagh didn't have to move out of second gear against an opponent who didn't look anywhere near European class, and the Derry man just picked him off from start to finish.
All three judges gave the fight to McCullagh, 98-92, 98-92 and 96-94 - the third official clearly watching a different fight to everyone else in the arena.

Liam Ball Triathlon
The 34th edition of the Liam Ball Triathlon took place in May and once again was well attended with Luke McCarron and Jenny Cosgrove taking the overall victories.
Liam Ball represented Ireland at two Olympic Games and was a sporting hero to the people of Derry before his untimely death just as the sport of triathlon was establishing itself in the early 1980s. Since then Northwest Triathlon Club have held this annual event which has always attracted big numbers and this year was no different. The addition of a Try-a-tri has also boosted numbers and the popularity of the event with Conor Byrne the winner this year.

Pride of Creggan
ST Cecilia’s were on cloud nine after winning the Northern Ireland Junior Cup.
The girls in green came from behind in the final at Moyola Park, with a goal from Abaigh Dunn and a brace from captain Caoirse Doherty helping them to a 3-1 victory against Holy Cross of Strabane.
It avenged the defeat of a year ago when the team lost in the same final, and this trophy is one that they can add to a collection that already contains two Northern Ireland futsal titles from earlier this season, with another tournament in June a chance to make it a clean sweep and an unbeaten run.

The O’Neills Walled City Marathon 2019 was hailed a huge success by the event organisers who revealed that plans are already underway for a major spectacle to celebrate 2020.
Hundreds of spectators turned out in forceat key locations along the 26.2 mile route to cheer on the runners who braved challenging conditions to complete one of Ireland’s biggest annual marathons and earn the distinctive keepsake medal.
Around 1,000 runners signed up for this year’s event with Irish sportswear giants, O’Neills on board for the first time as title sponsors.
Kenyan Star, Eric Koech lived up to his pre-race favourite's tag as he claimed his second Walled City Marathon victory in challenging conditions in the seventh staging of the spectacular 26.2 mile classic.
The 2016 winner, representing Project Africa, crossed the line at the iconic Guildhall Square almost six minutes clear of runner-up, Foyle Valley's Chris McGuinness in an excellent time of 2:34:19 as he became the sixth Kenyan winner in seven years.
A runner-up to course record holder and compatriot, Dan Tanui last year with a time of 2:25:29 , the 37 year-old Koech took almost nine minutes longer to finish the stunning 26.2 mile course along the banks of the River Foyle this year in testing conditions but it was more than enough to clinch the top prize.