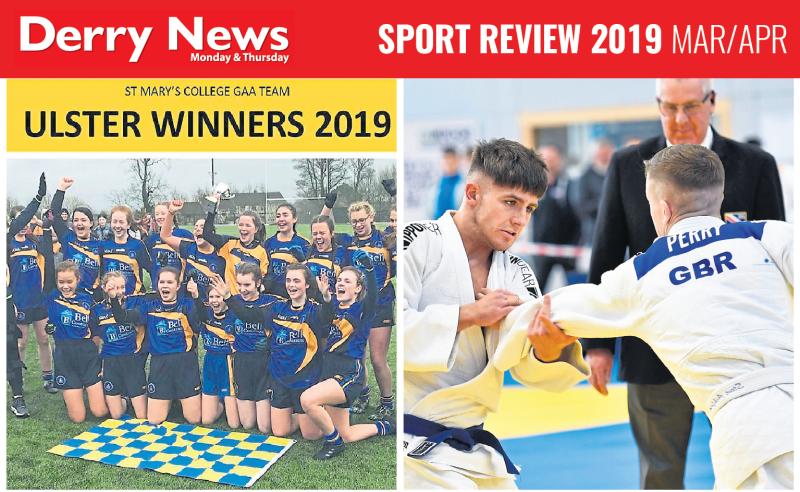 City of Derry Spartan Catherine Whoriskey made an impressive return to the athletics scene as she claimed second place in the Walled City 10-miler, the annual build up to the city's marathon.
Whoriskey, in her first race since the birth of her second child, mastered the tough conditions well and came home behind Ciara Toner of Springwell in a time of 63:07. The overall victor was David Flynn of Clonliffe Harriers, with Foyle Valley completing the podium finishes as Gary Slevin and Craig Simpson came in second and third respectively.

Ulster champions
Elsewhere St. Mary's added their name to the list of Ulster champions as they beat St. Colmcille of Crossgar in a memorable U16 final.
In a thrilling final, the Northland Road school recovered from a three points half time deficit to ensure their place in the history books. The school showed great determination and character throughout and had enough composure in the end to get over the line by just two points.
In a dramatic finale, it took a magnificent point blank save in the dying seconds from keeper, Sian Harris, to secure victory ensure the Foyle Shield would be making its maiden journey to Derry City.

APRIL - Winners all around!

Derry City emerged victorious 3-2 over rivals Finn Harps in a memorable derby match in April, but the game was overshadowed by a horrrendous challange from Colm Deasy which saw defender Ciaran Coll leave the field on a stretcher.
The tackle infuriated City boss Declan Devine who describbed it as 'horrendous, disgraceful and disappointing'. The tackle took the shine off an otherwise brilliant night for the Candystripes who won thanks to a goal from Aidy Delap and two from David Parkhouse.
It was also a memorable month for Devine, who celebrated his 100th game in charge of Derry City by seeing his team win away at Waterford as City continued to impress in the new season.

Three in a row for St. Columb's
There was that winning feeling all around as St Columb’s College squad made it three Northern Ireland titles in a row as they comprehensively defeated Holy Cross of Strabane to claim the U14 Cup.
First half goals from the impressive Jack McFeely (2), Conor Barr, Sean Carlin and skipper Oran Kelly had the Derry school well in control before Barr added a sixth, and his second, on the hour mark to put a further shine on the scoreline.