Doherty pots the lot whilst Strain claims the plate prize

Peter Doherty (Dalys bar) became the first name to be carved into the Shea Conway Grand slam of snooker trophy as he battled past Simon Cooke (Aoh) in last Monday night's showpiece at Georges bar. 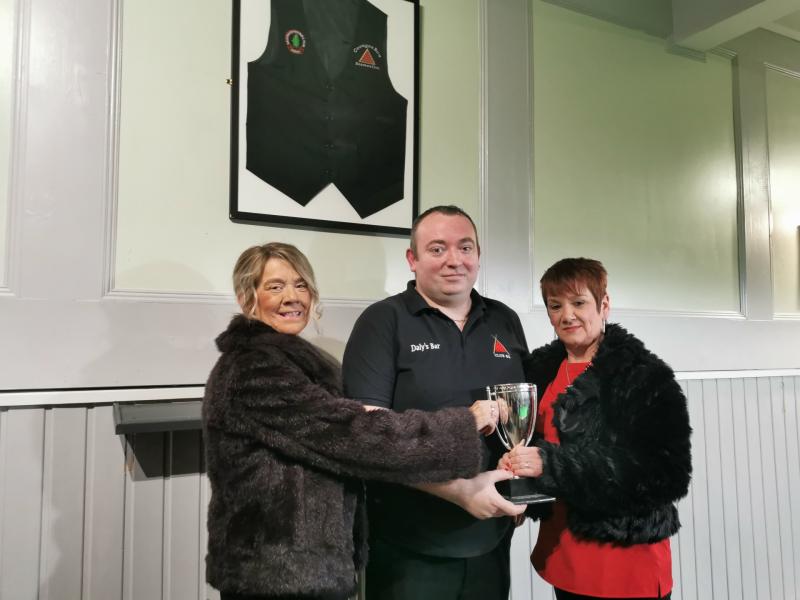 Peter Doherty (Dalys bar) became the first name to be carved into the Shea Conway Grand slam of snooker trophy as he battled past Simon Cooke (Aoh) in last Monday night's showpiece at Georges bar.

The first frame saw Cooke take an early twenty point plus lead in the unique 10 red format though a missed black off the spot allowed Doherty to come back into it. Doherty gifted Cooke a chance again at seeing out the frame though this time a missed pink to the middle would prove costly as Doherty potted upto and including the black to edge in front.

Frame two saw Peter be the one to go out in front with a break of 37 and Cooke battled back to the point were he needed the pink off the last red along with the colours which were all on their spots. Cooke again missed the pink into the middle pocket allowing Doherty into seal the frame on the colours for a 2-0 lead.

Frame three started off looking like Doherty was going to polish the match off as again he took an early lead with Cooke trying his best to hold onto his coat tails. Doherty would miss a chance of finishing the game off allowing Cooke in with a half chance to extend the match to a fourth frame. A couple of good pots from Cooke allowed him to do that as he saw the frame out on the pink ball.
Buoyed by winning his first frame of the night, Cooke went out in front early in the fourth and stayed there until all 10 reds disappeared. As the two lads reached the colours it was Cooke who had a 24 point lead though he missed the pink again to allow Doherty a chance. Doherty potted yellow and green before leaving himself hampered on the brown ball as he had kicked into the blue while trying to play position.

To make matters worse he also left himself having to bridge over the blue using the rest. Cooke was thinking at this stage that he would get back to the table for another chance though Doherty went for an all duck no dinner shot and what a cracking pot on the brown it was so much so that it was declared 'shot of the tournament'. Not only did Peter pot it, he finished inch perfect on the blue before potting the easy pink and black to be crowned champion and a very worthy winner. Peter also claimed the high break prize after a fantastic sequence of 82 in the group stages that was held back in the summer.

Not only was it the main pot that had to be decided as for those players that finished 3rd and 4th in their groups their was a plate competition and in the final it was Gareth Strain versus Joe Porter. Porter tried his best though truth be told he was just not at the races on the night and Strain with a little bit of luck here and there mixed with some excellent pots seen him run out a straight frame winner 2-0.

At the end of proceedings, two of Shea's sisters Patricia and Paula presented the prizes to the winners and runners up on behalf of the Conway family. A massive thanks has to go to Seany McLaughlin, proprietor of Georges for his superb sponsorship of the event and also for use of the venue and we look forward to returning for the second running of this unique tournament at the end of the current season. Thanks also has to go to Joe Sims and John Harkin for officiating throughout the tournament with a top job done as always.