Institute will need to find some New Year’s resolution if they are to drag themselves away from the foot of the table, after they wilted all too easily against Carrick Rangers in a game they really needed a positive result from. 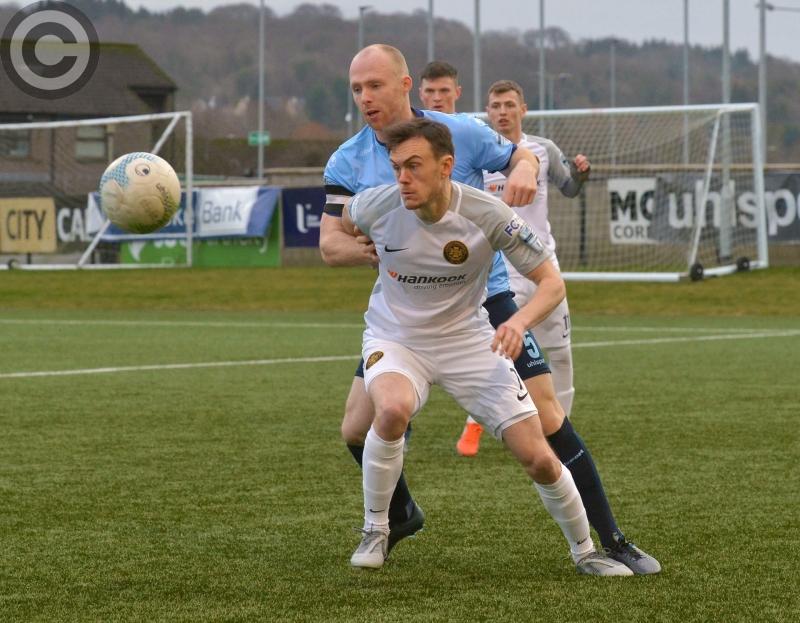 Institute will need to find some New Year’s resolution if they are to drag themselves away from the foot of the table, after they wilted all too easily against Carrick Rangers in a game they really needed a positive result from.

It has been a horrible festive period for Sean Connor’s men, two home defeats against teams in and around them at the foot of the table making the league table very bleak reading heading into 2020. Even more concerning than the result was the performance again, a disappointing display against Warrenpoint followed up by a lacklustre display that was bereft of confidence, with Carrick gifted two early goals to make this and long and fruitless day for the players in blue.

‘Stute now travel to Linfield on New Year’s Day, and they do so level with Warrenpoint at the foot of the table, with only goal difference, and a significant lack of confidence separating the two sides.

The warning signs were there for ‘Stute before the opening goal as Carrick looked the brighter of the two teams, Lee Chapman finding himself in a promising shooting position on the edge of the area but he dallied a moment longer than he should have and the shot was charged down. But Carrick, who had failed to score a goal since defeating ‘Stute earlier in the month, got the opener on 11 minutes when Kyle Cherry linked with Lloyd Anderson in the area and the latter was afforded too much space just six yards from goal, heading into the empty net after Rory Brown had parried his first effort. 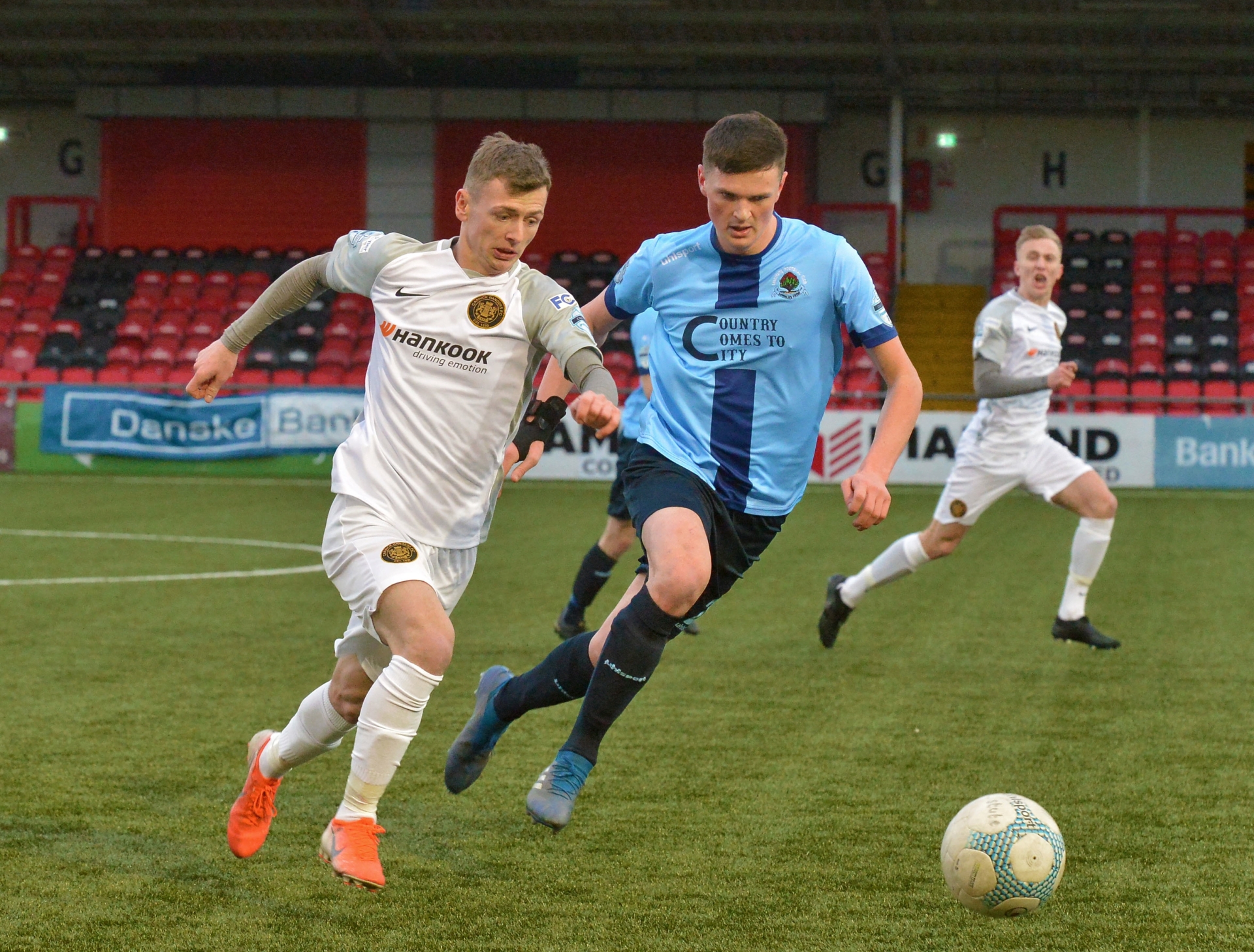 ‘Stute tried to respond but they could well have fallen two goals behind when a long thro into the area led to miscommunication between Brown and Shaun Leppard, with the centre-half flicking a header past his own goalkeeper right across goal with everyone in blue relieved that the ball did not find the net.

‘Stute began to bother Carrick after 18 minutes and whilst Cormac Burke may have been overly ambitious in his attempt at goal from wide on the left, it did lead to a corner from which Conor Tourish came so close to levelling, his glancing header just wide of the target.

Yet just when it seemed that ‘Stute were getting into the game. A mistake at the back cost them dearly as Dean Curry failed to intercept a simple ball and Lee Chapman went clear down the right before firing a low cross to the back post where Reece Neale arrived with a simple tap in for 2-0.

‘Stute boss Sean Connor responded to that by making a substitution after just 20 minutes, Adam Green on for a clearly disappointed Shaun Leppard.

The remainder of the half was all effort without reward for ‘Stute with Joe McCready doing his best to make something happen, but it was Carrick who looked the more dangerous regardless. The visitor came so close to making it 3-0 just before the break when Brown hesitated coming off his line and as a result he came off second best in a challenge with Stewart Nixon. The loose ball broke to Chapman in the area and he thought he had scored until young Jack Bradley arrived in the nick of time to clear the ball off the line.

The introduction of Jamie Dunne just after the break gave ‘Stute some more energy and life in attack, the winger announcing his arrival with a brilliant and determined run into the penalty area before dinking a cross over goalkeeper Ben Nicholl but Joe McCready was unable to capitalise.

The greater threat remained with Carrick as the game went on however and when Caolan Loughran headed down into a packed penalty area, the ball was cleared, but only to Neale lurking outside the area and his ambitious effort had to be plucked out of the air by Brown. 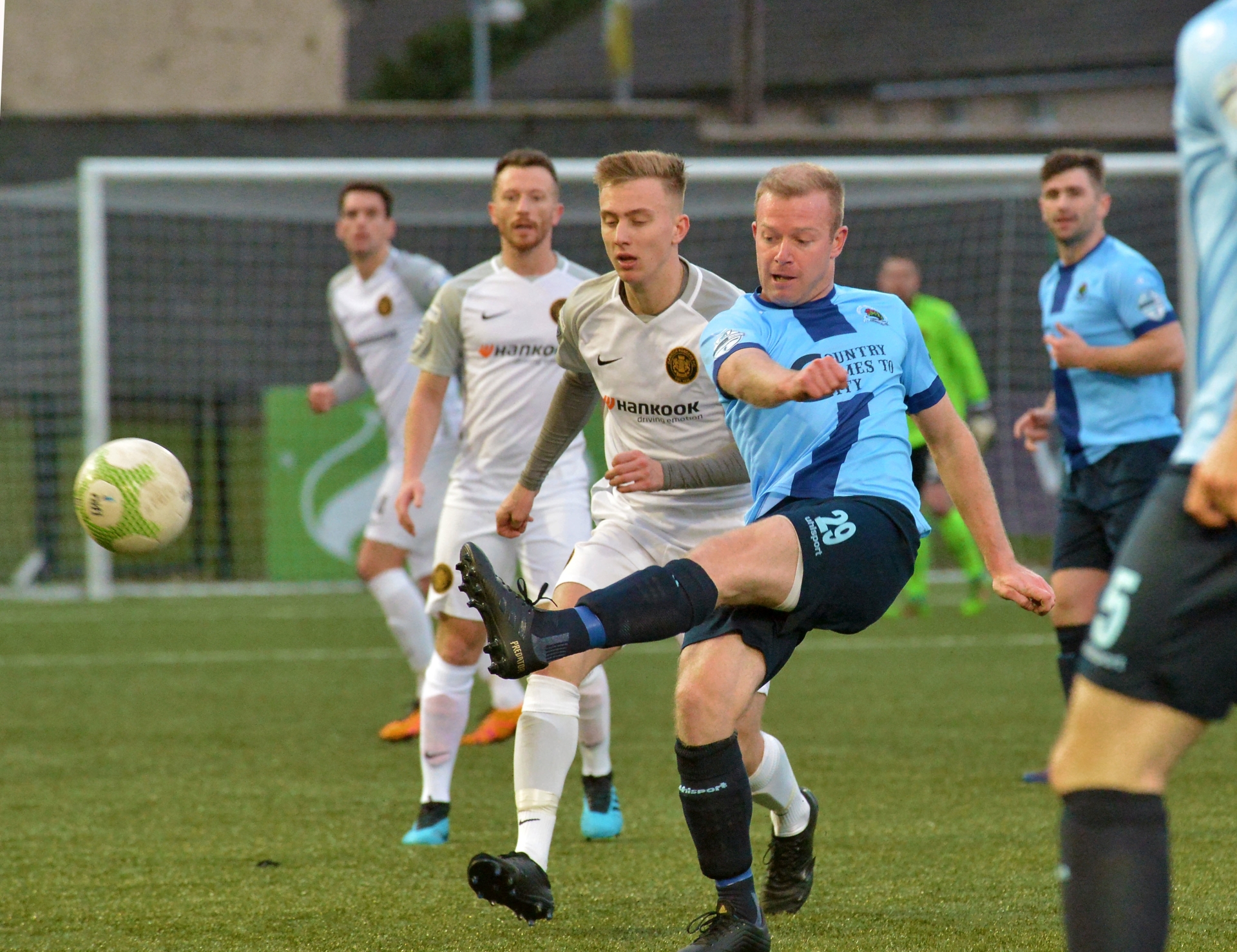 It just never looked like happening for ‘Stute with the energy and endeavour all shown by the players in white and they got the killer goal on 73 minutes when substitute Guillaume Keke broke down the right, won the race to the ball ahead of goalkeeper Brown and he passed across the face of the empty goal for Stewart Nixon to tap in for a simple but important goal.

‘Stute, to their credit, kept going and good work from McCready carved out a chance for Dunne inside the area, but in a moment which summed up their day, the ball beat Nicholl but rolled the wrong side of the post. It was nonetheless, the closest that ‘Stute came all day, 78 minutes into the game.

‘Stute’s best chances came when the game was over as a contest, but they could have had a consolation when Cormac Burke crossed for Graham Crown, and his diving header was just past the upright, much to the midfielder’s disappointment.

Man of the Match
Reece Neale scored a fine second goal and was eager to add to his tally throughout. He added a real attacking dimension to the Carrick attack, and he did so from full back.

Moment of the Match
The first goal in this one was always going to be significant especially for the confidence boost it would give, and it deservedly went to Carrick after an energetic start. Lloyd Anderson needed two attempts before he got his goal but he was in so much space it hardly mattered.

Key Battle
Joe McCready never let his head drop, and when he got the ball he was always looking to make things happen. Mark Surgeoner was kept on his toes as a result in what was an interesting battle between the striker and the defender.