Tonight sees the first ever running of the Shea Conway grand slam of snooker 10 reds tournament come to an end with both the plate final and the main pot final on at Georges bar. 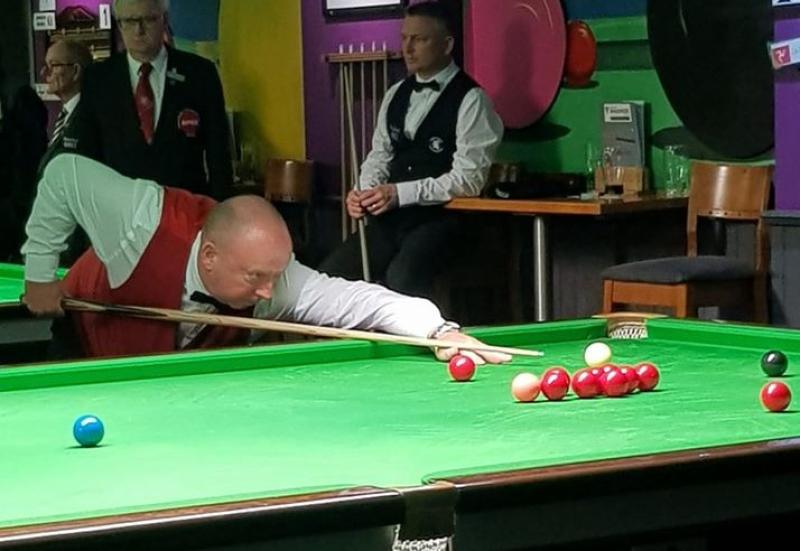 Tonight sees the first ever running of the Shea Conway grand slam of snooker 10 reds tournament come to an end with both the plate final and the main pot final on at Georges bar.
In the plate final it will be Joe Porter (+5) taking on Gareth Strain (+10) after Joe Porter overcame Gregory Cooke (Scr) 2-1 in their quarter final clash before Porter won another deciding frame over Daryl O Donnell (+25) in the semi final. Gareth got the better of Cathal Wilson in their semi final in straight frames to book his place in tonigths final.
After the plate final is over we will have the main pot final with it being a clash of two heavyweights Simon Cooke and Peter Doherty as both are scratch players. The two have met in a big final before in 2006 with Doherty winning that one 3-2 so Cooke is sure to be out for revenge tonight.
Cooke booked his passage into tonight's final after coming from 1-0 down against Ruairi Gill (+20) in last week's semi final and Doherty did the same as he trailed Stephen Heaney (+20) early on. Doherty finished his match off with an excellent clearance of 68.

MAILEYS 'A' HOLD 3 POINT LEAD AT HALFWAY STAGE
As the action in the Legends Tips handicap league division two comes to an end for the Christmas break it has also reached the halfway stage and Maileys A will enjoy a 3 point lead going into 2020 over Pilotsrow though there is still a few other teams is the reckoning also.
Last week's action saw Maileys A beat their clubmates Maileys B for the second week running though this time had to settle for the narrowest of 3-2 victories after coming from 2-0 down. Colm McGee Jnr beat the individual leaderboard leader Andy Shiels in a tight frame to put the B team 1-0 ahead. Cathal Wilson won a re-spotted black ball against Jim Phelan to make it 2-0 to the second stringers and it was left to Charlie Phelan to score the A teams first point off the night and he did that with a comfortable win over Paul Quinn to start the comeback. Declan McIntyre leveled the match at 2-2 as he too comfortable beat Tommy McCallion, the decider would see Colm McGee Snr and Johnpaul Shiels cross cues and it would be Jp who would complete the comeback for the league leaders.
Pilotsrow will sit in second place over the Christmas period after their excellent 4-1 home win over visiting City of Derry golf club last Thursday night. The golfers found themselves 1-0 ahead early on as Brian Woodrow beat Paul Johnstone. Orann O'Doherty, assisted by a cracking break of 49, made it 1-1 as he beat Thomas Hippsley. Malachy McIvor made it 2-1 as he outscored Ciaran Cunningham in their frame, while Hugh Campbell made it 3-1 to the Bogside club as he got the better of William Robinson in their frame before Pius Moore completed the 4-1 win as he edged Eugene Adams on the colours.
Oak Grove's 3-2 win over Glendermott CC B has allowed them to leap Resevoir who were on the sidelines for the last two weeks. Stephen Dougherty won a black ball fight against John Coogan to put the Waterside club 1-0 ahead. Paul Ramsey won the second frame of the night also on the black ball against Dylan Ross as he leveled the match at 1-1. Ruairi McGowan gave Oak Grove the lead for the first time on the night as he beat Kolyn Patterson before Glendermott CC B captain David Downey made it 2-2 as he won his battle against Gary Curran. The decider would see super sub William Browne win his fifth frame of the season as he beat Jonny Adams to seal the win for the Bishop street club.
Aoh C and Georges A clashed at Foyle street and it would be Georges A who made the journey back up Shipquay street 'happy as Larry' owing to a top notch 4-1 win.
Joe Hamilton, drafted in from the sidelines, won a black ball against Danny Harkin to put Georges A 1-0 ahead. Aoh C captain Phil Curran registered his seventh win out of 10 frames this season as he beat Martin Fleming to make it 1-1. Owen Toland made it 2-1 to Georges A as he would beat John McDaid before Dee Harrison edged Jimbo McCallion to make it 3-1, 3-1 was soon 4-1 as Keith Brady got the better of Eddie McColgan in what was a very tight frame.
Tracys were hoping to make it another win over Top Break when the Rosemount side came calling last Tuesday night though that was not to be as Top Break had their team manager Harry McGuinness back in action.
It was Paul Keenan who stole the limelight as he needed only two visits to the table to win his frame against Brian McCourt. Brian broke the balls and Paul got in immediately with a break of 40 before giving Brian a chance. Brian missed, allowing Paul back to the table to score a break of 31 as the former intermediate champion showed that he is not just past it yet. Harry McGuiness boosted by Paul's performance tunred in a good performance himself as he would beat Kevin Daly to make it 2-0, Alan Healy and Calvin Hegarty made it 2-2 as they won their respective frames against Tony Morrison and Gavan Harkin, Raymond Whitehouse would clinch the final frame as he beat E.Young to secure a small bit of revenge as the Top Break side were beat 5-0 at home last week by Tracys.
The last game to be reported on is that of Georges B and Over the Hill. Over the Hill took a 1-0 lead as John Hegarty beat Paddy Doran. 1-0 became 1-1 as Ian Doran beat Derek Doherty. Benny McGlinchey sailed to a win over Hugh McCafferty to restore Over the Hill's lead before Hugo Bonner made sure of the match win for Over the Hill as he beat Paddy Ryan. James Nicholson kept his impressive strike rate up as he won the last frame off the night against Joe Bonner to take his tally to eight from ten for the season.

GLENDERMOTT CC A and CYMS ADVANCE TO SEMI FINALS

Two of the four quarter final matches in the Georges bar sponsored pairs team knockout cup were played last week with Glendermott CC A and Cyms both making it to the last four.
Glendermott CC A advanced after a long battle that finished the day after it started. Ricco Long and Trevor McDermott would put Glendermott CC A 1-0 ahead as they edged the first frame against Raymond Barrow and Seamus Cusack.
Christopher Clifford and Steven Adair made it 2-0 as they would win the first of their two frames against Seanpaul McCauley and Ruairi Gill. Frame three saw Simon Cooke and Sean Ferry Snr keep the match somewhat alive for the Aoh A team as they beat Davy Clifford and Craig Mooney on the green ball. Raymond Barrow and Seamus Cusack made it 2-2 as they won the second frame of their match up against Long and McDermott.
Glendermott CC A would take the lead again as Clifford junior and Adair beat Gill and McCauley though not before Gill and McCauley would get a snooker allowing them to tie on the black ball but Gill missed the chance of the respot and Clifford junior sank it for 3-2.
The last frame in normal time saw t go down to the blue ball and with Ferry putting Mooney in a cracking snooker it looked good for a playoff frame. Mooney however escaped and leave Cooke a tricky blue which he potted before potting the pink to force the playoff frame. It was no surprise to see the playoff frame was going to be contested by the two pairs that had won 2-0 on the night and it was the partnership of Clifford and Adair who went into an early lead and stay their throughout as we got to the last red. Ferry Snr laid an other cracking snooker with Clifford failing to escape leaving Cooke a freeball meaning that the Aoh pair could now win though Cooke fluffed his lines at the free ball and the Aoh pair ended up conceding on the green.
Cyms made the journey to Limavady a victorious one as they came away 4-1 winners. Adrian McFadden had a 44 break in the first frame as he and partner Joe Gallagher put Cyms 1-0 ahead as they beat Peter Logue and Paschal McKenna. Gareth Kirwan had a 50 break as he and Roy Duffy made it 2-0 as they beat Alan Loughrey and Martin Mullan.
Things did not get much better for Limavady as Phelim McClafferty and Ken Kirwan made it 3-0 as they outscored Gregory Cooke and Tommy Wilson. Paschal McKenna would construct a break of 40 in the second frame of his and Logues match against McFadden and Gallagher as they saved the brush and extended the match for another frame though this is were Limavadys title hopes came to an end as Kirwan and Duffy would again get the better of Loughrey and Mullan to end the match 4-1.