Kombat heading into Christmas on a high

It has been a memorable few weeks for Kombat Jiu Jitsu whose fighters have added to the growing reputation of the Derry-based club. 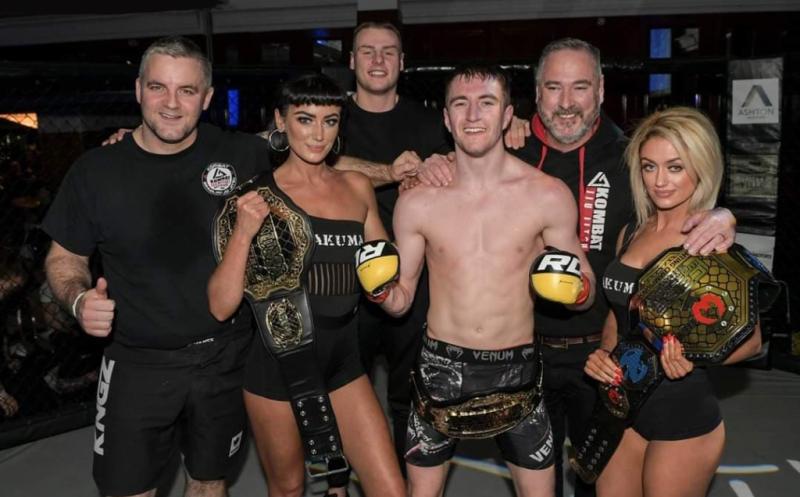 It has been a memorable few weeks for Kombat Jiu Jitsu whose fighters have added to the growing reputation of the Derry-based club.
Matthew Friel from Kombat has been celebrating after becoming a Treble MMA Champion in 2 weight classes.
Matthew was originally set to face Ger Harris from SBG Charlestown to defend his flyweight title but unfortunately Ger had to pull the fight in the last week leading up to the fight.
Matthew, the current flyweight Champion of Akuma, stepped up a weight class on a week's notice to fight for the Akuma Bantamweight Championship belt against Ryano's Jamie Abbott. Mathew won the fight by unanimous decision to claim the belt with a dominant 3 round performance.
Coach Ciaran Mc Fadden was delighted but not surprised:
“Matthew is probably the UKs most active fighter with 7 MMA fights this year,” he said. “From the bottom of the card first fight to the headlining main event inside 1 year is a fantastic effort. I have been training Matthew about 3 or 4 years and its unreal what he's achieved in that time frame, the future is bright."
Kombat also had another local fighter on the card - James Slavin - who was unlucky after a hard fought fight, and some good show of his skills on the feet losing the match ultimately to Aaron Daniel from Sbg.
More recently,
Dylan Howell and James Slavin from Kombat recently competed in a K1 Kickboxing show Fightclub Circus 2 in Armagh.
Dylan won his contest with a first round knock-out in 41 seconds while James won a unanimous decision after 3 rounds of action, a brilliant effort from both.
Overall Kombat Jiu jitsu have collected 4 x MMA titles this year and 1 x K1 kickboxing Irish Title.
Anyone interested in joining up get in touch with the club via Facebook or Instagram.