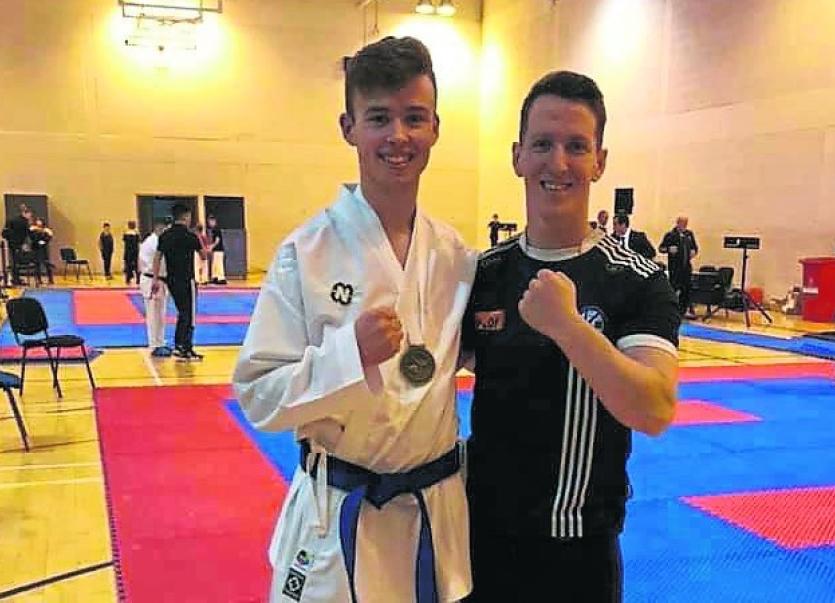 Claudy Karate Club has its first national WKF  champion, after Ciaran Curry came home with the top prize from the ONAKAI Karate Ireland’s Junior National Championships in Tallaght, Dublin.
Ciaran was one of nine from the club that travelled to the championships and in the -68km class, he took on some very experienced fighters to claim the title.
"Ciaran is one of a kind,” stated his coach Dermot McFeely.
“This is a goal we set ourselves about two years ago to work towards. He's been close to achieving this, but this time around he was much better prepared.
“Maturity played a big part in this, and he's growing into a special talent. But as far as I'm concerned, this is just another stepping stone for him, and he's going to go on and achieve some amazing things in Karate. The potential and raw ability is there, watch this space."
In the semi-final, Ciaran came up against Meath's Ryan Durning. Ryan had the much better start and went into a 2-0 lead only 30 seconds into the fight, taking advantage of Ciaran’s early mistake by scoring a powerful body kick.
After changing his tactics, Ciaran found his first score with 58 seconds left on the clock. He then followed this up with a body kick of his own. This, along with two more one-point scores left the final score at 5-2 in Ciaran’s favour.
Determined not to make the same mistakes in the final against the very talented Conor Grogan from Dublin. Ciaran went after the fight early and controlled it throughout.
He demonstrated real passion and power to dominate this fight. Tactically he was able to see out the fight when Conor was determined to pull off a big score of his own towards the end. But Ciaran gave very little away, and seen out the fight with excellent technical punching ability, winning 3-0.
This is a first National WKF title for Ciaran and for Claudy Karate Club.
"I've been working towards this for the past two years, so it feels good to see that my efforts are finally starting to pay off,” commented Ciaran. “For me, passion for karate is what drives me to achieve my goals, and I will continue now to work towards bigger and better goals in the future.”