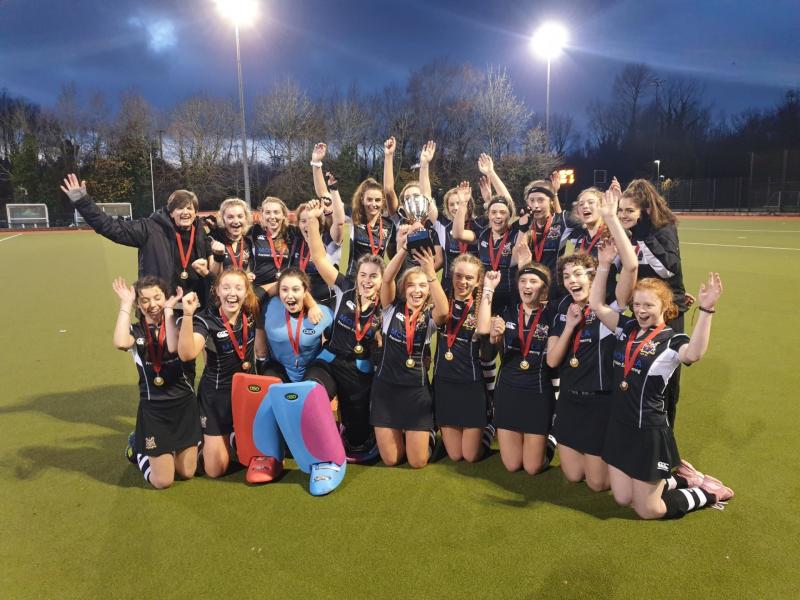 The Rainey squad celebrate their win.

A goal from Charlotte Beggs was enough for Rainey to see off the challenge of Banbridge Academy in Wednesday's Ulster Schools' Superleague final at Stormont.

Earlier in the competition, the Magherafelt girls won their league group with victories over Coleraine Grammar School (7-0), Glenlola Collegiate (4-0), Dalriada (1-0) and Ballymena Academy (4-0) to top their Superleague section and reach the last eight.

In their quarter-final against Armagh, goals from Gabi Scott and Alexa Hastings put them two up before Armagh pegged a goal back before half-time.

Armagh eventually levelled the game, sending it to a shoot-out to decide the winner. Thanks to saves from goalkeeper Dawn Francis, goals from skipper Ellie Montgomery, Charlotte Beggs and Gabi Scott Rainey were victorious.

In the semi-final against Strathearn School, Rainey were under the cosh but gradually worked their way into the game.  A goal from Ellie Stewart gave Magherafelt girls confidence and they began to take control.

A penalty from Ellie Montgomery and a fine individual goal from Charlotte Beggs opened up a 3-0 interval lead.  With sustained pressure after half-time, they added a fourth goal, from Gabi Scott, to book their final spot.