A victorous Jason Smyth returned home at the weekend after yet a record-breaking showing at the World Para-Athletics Championships in Dubai. 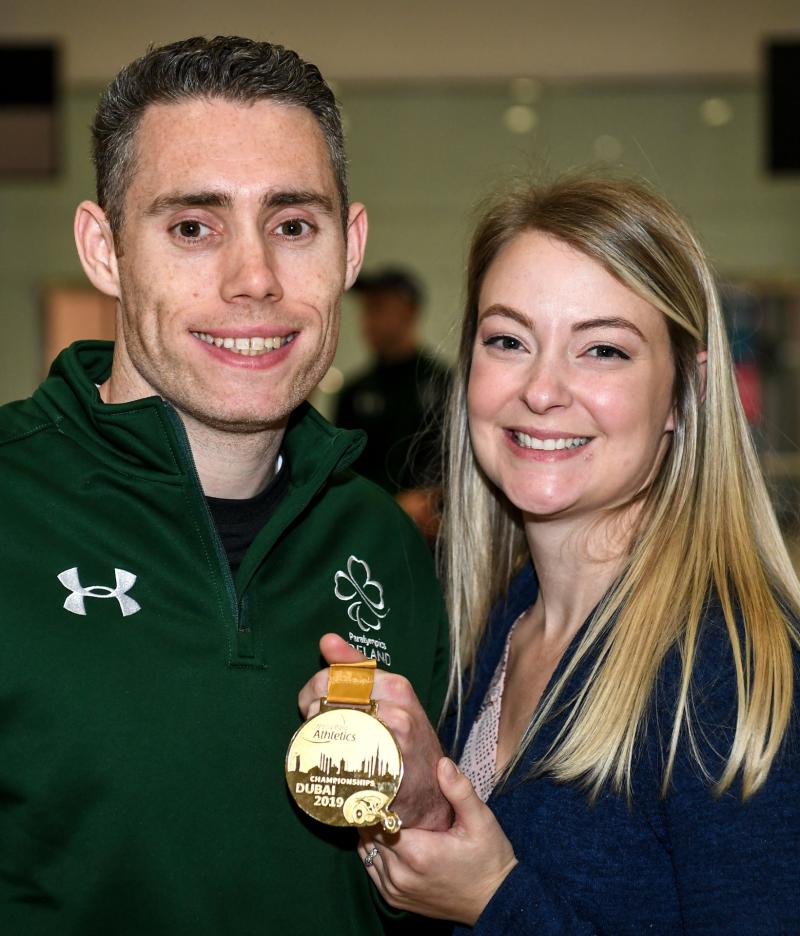 T13 100m gold medalist Jason Smyth, from Derry, is greeted by his wife Elise, at Dublin Airport on Team Ireland's return from the World Para Athletics Championships 2019, held in Dubai.

A victorous Jason Smyth returned home at the weekend after yet a record-breaking showing at the World Para-Athletics Championships in Dubai.
Eglinton man Smyth won his 20th gold medal as he surged to victory in the T13 100m final. In doing so, he set a new Championship record as he clocked 10.54 seconds, meaning that he is still undefeated on the major championship stage.
“It’s another incredible world championships, things obviously have been going very well this year,” he said. “And such a strange time of the year, November, to be trying to put up fast times but to come here and put up one of my fastest times of the season, it’s testament to a lot of the people that are around me and supporting me and putting me in a position to get here and do so.”
Last summer in Berlin, Smyth further extended what is, by his own admission, a quite remarkable winning streak; now 15 years undefeated on the international stage, he pocketed another double sprint gold at the European Para-Athletics Championships, with another record to boot, bringing his tally at that stage to 19.
That made it five Paralympics gold medals, another six European gold medals plus his now eight at the World Championships.
By any standards it is unique in Irish sport - and Smyth is already eyeing up Tokyo 2020, his fourth Paralympics, where even at age 33 there is the promise of yet more gold.
Smyth was not the only one returning with a medal with Niamh McCarthy picking up a bronze medal in the discuss.