The sky is the limit for teenager Brown 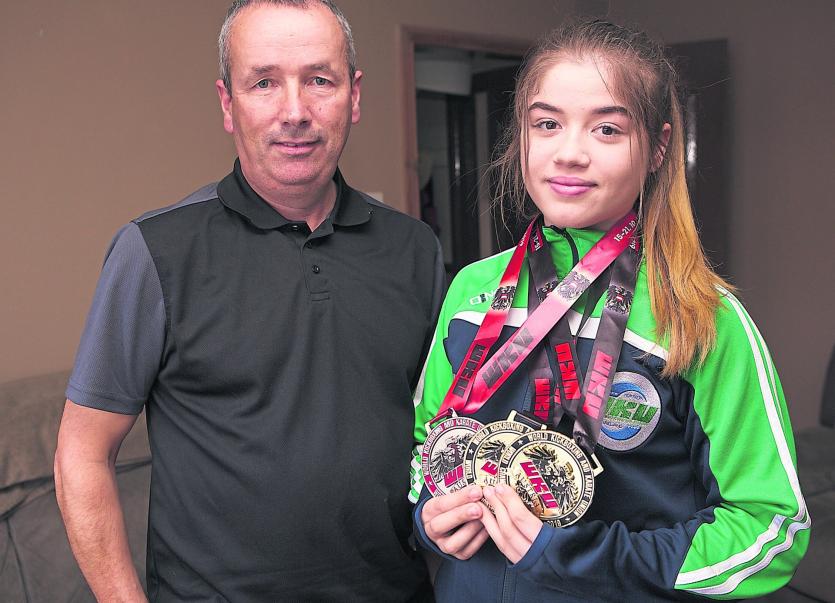 Niamh Brown will look back on 2019 as a year of significant achievement, but the 14-year old Limavady Titan is just getting started.
This year alone Niamh has won 2 Northern Ireland titles, 2 British Open titles (travelling to Wolverhampton) 2 European titles (travelling to Corby in England), 2 World Cup titles and 2 World Gold Medals in Austria, an amazing haul for someone so young. Wherever Niamh goes, it seems that success is sure to follow with the Oakgrove College student also winning her category in the recent ‘Best of the Best’ event in Dublin in August.
Representing Limavady Titans, Niamh is just 14 years old, fighting in 13-17 year old -60kg which is a big division. She has also won 39 gold medals competing in numerous competitions all over Ireland and there is little doubt that that number will only increase in the months and years to come. Niamh is as ambitious as she is talented and she competes in her own sections and the sections above. At times she has competed at under 18 years and has fought at senior level this year gaining a silver medal.
Niamh has put a lot of hard work into training and it has paid dividends and there is no doubt that 2020 promises exciting times for a young competitor who can only get better and stronger.
Niamh also comes from good stock herself, with her mother a champion kickboxer in her own right. Mary Brown, now retired, is a former British and All-Ireland kickboxing champion who dominated her sport for years, no doubt passing on the interest in the sport to her daughter, who has now picked up the gauntlet and is proving that success runs deep in the Brown family. Mary insists however that Niamh is much more talented than she ever was and with so much achieved already at only 14-years old, the world is her oyster going whatever direction she takes.