'The dominant team deserved to win' 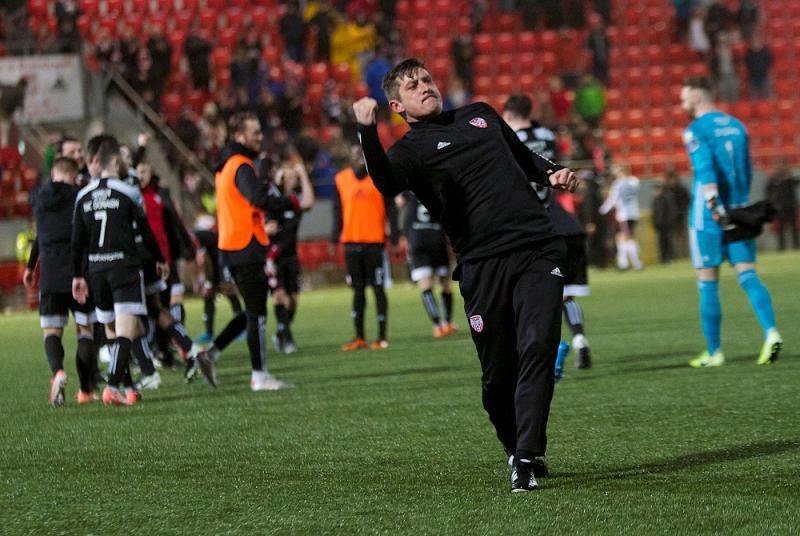 GET IN THERE... Declan Devine celebrates the win with the Derry City fans. Photo: Tom Heaney (nwpresspics)

Declan Devine finally got a win over Bohemians at the fifth time of asking and is now hoping to make a habit of it going forward.
Derry City were left frustrated against Bohs continuously last season, picking up three points from four games against the Dubliners, with just one goal scored in the process. City have matched that points tally and bettered their goal return already and Devine insisted the points went to the better team.
“Bohs are a very good side and let’s be honest, they’ve played three games in a week and we’ve played two and that’s not taking away anything from us,” he said.
“Fair play to them, they came here and had a right good go, but I thought we were the dominant side, thought we were very much the team in control of the game and I think the players deserve huge credit again because they showed brilliant character and a desire to win the match.”
The Candystripes are making a habit of scoring late goals, with Adam Liddle’s 95th minute goal against Finn Harps last week followed by Figueira’s 92nd minute strike on Friday. Derry City just keep going…
“We have to. We have to,” Devine insisted.
“The game lasts that long. These players worked extremely hard in pre-season and their fitness levels are really high.
“The importance of the squad was shown again in the three guys who came on and had a huge impact.
“We have a lot of talented players but we have to fight and scrap for every point we earn in this league. It is a tough league, an unforgiving league and we have got to play when we have got the ball and dig deep when we don’t. All in all it was a good night but we have to try and get better and keep moving forward and keep having that same appetite every Friday night we play.”

Key Moment
Danny Lupano’s acrobatic goal-line clearance was a key moment in the game, and played a pivotal part in City securing their first clean sheet of the season.
“It was a key moment but there were a lot of key moments,” Devine stated.
“We had a couple of free headers; Ally has a free header, Eoin Toal has a free header, so it works both ways. Our own downfall was giving the chance away that Danny has cleared, and what a clearance. Character is everything, quality is everything and an ability for people to attack and run to the very end the players deserve huge credit for.
“There were a lot of square pegs in round holes but ultimately we have done a job and that’s all it is.
“The players have been magnificent, I keep saying that, and they have been since January 3.
“They will continue to get better and if they keep showing the appetite and hunger then that’s all I can ask for.”