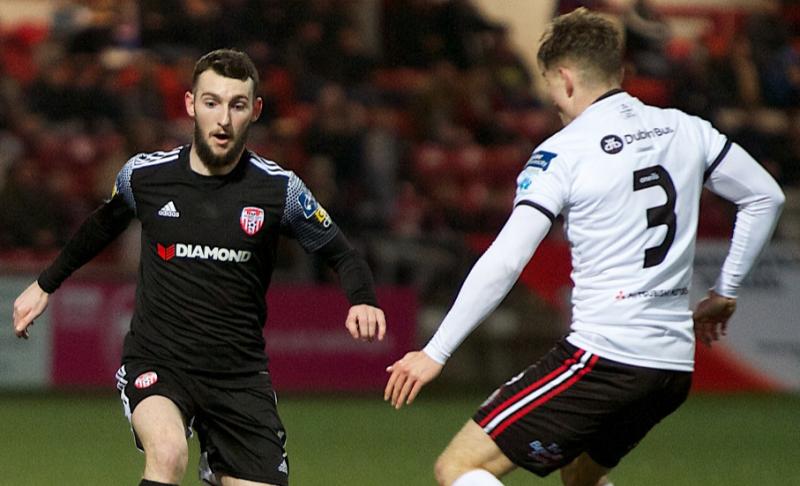 ON THE WING... Jamie McDonagh in action against Bohemians on Friday night. Photo: Tom Heaney (nwpresspics)

Jamie McDonagh believes that Derry City will travel to Waterford later this week hoping to replicate the ‘special’ feeling the players enjoyed in the victory over Bohemians.
The City players dug deep to see off Bohs in a tough and tense game at the Brandywell to get their first three points of the season on the board, bringing sense of relief after disappointing results against Dundalk and Finn Harps. McDonagh admitted that the win was important for team morale.
“Our first win of the season means it gives us a wee bit of confidence going into the Waterford, so yeah it was important to win,” he said. “We have got a bit of confidence now and I know all the boys will be looking forward to the Waterford match.
“We’ll be going there looking to exploit them and get three points again, because that feeling of getting three points against Bohs is special and we want to get as many points as possible.”
The importance of keeping a clean sheet was not lost on the Derry City players, particularly after two scoreless draws between the club last season.
“Whenever we came in at half-time the manager talked about making sure we keep a clean-sheet,” McDonagh continued.
“Obviously we felt comfortable in the first half and knew that we were doing quite well and knew that we just needed to get that goal and keep a clean-sheet.
“If you keep a clean-sheet in this league you have a good chance in winning games, so we done that and that’s credit to the back-four and everyone as a whole, but as I said keeping clean-sheets are ideal.
“It will stand us in good stead and we’ll be looking to keep this momentum going and hopefully we can get a few more clean-sheets, because I’m sure we have got the players to win us more games.”

Important
McDonagh heaped praise on goal scorer Stephen Mallon, who made a memorable contribution on his first start for the club.
“That’s why Stevie was brought to the club and we see that in training every day and that’s why he was given his chance,” he explained.
“It’s important in those close games that we take our chances and Stevie did that tonight. It was a bit of magic from him and it’s a great goal from him. I think it was important to get up and running and get the three points, as it will do the team a world of good.”
McDonagh is now hoping that the Candystripes can build on the momentum from Friday, both individually and collectively.
“There were a lot of good performances and we looked solid at the back and the whole team collectively you could see we are starting to come together, things are starting to work and we can only get better from now,” he stated.
“Walter (Figueira) getting his goal will also do him the world of good as well and it’s good to get two different goalscorers and it will give the boys confidence.”