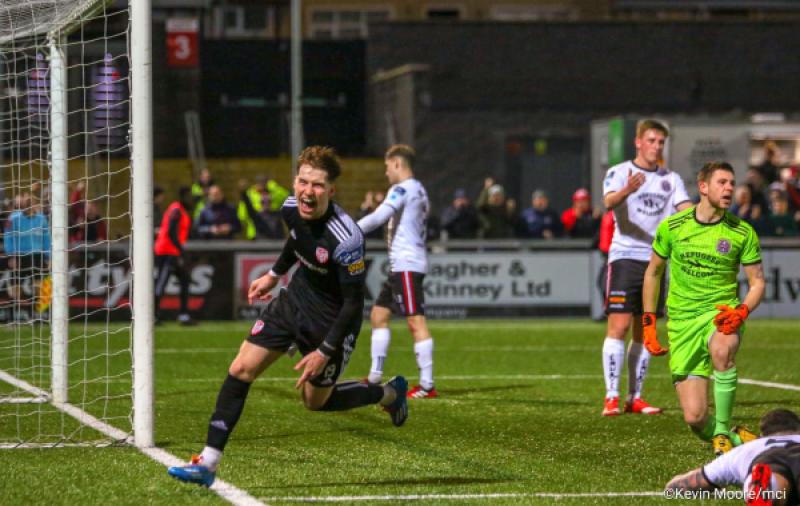 Stephen Mallon races away in celebration after scoring against Bohemians. Pic by Kevin Moore.

Stephen Mallon scored a superb goal as Derry City finally got off the mark for the season with victory over Bohemians at the Brandywell.

Mallon’s sensational second half effort opened up a tight contest against a Bohs side who gave as good as they got in an entertaining and tense game, before Walter Figueira sealed it in injury time.

From the start, Mallon was clearly up for this one and he produced Derry’s first shot on target on 20 minutes as he went directly for goal from a free kick on the right, and McGuinness had to scramble across to save, collecting the ball at the second attempt.

These were encouraging signs for Derry and the chance they had been waiting for arrived on the half hour when a quick break forward saw McDonagh cut inside and pick out the run of Nilsen into the area, but the striker was unable to turn the ball in from close range, shooting over.

Bohs were disciplined in their approach and hard to break down, but as an attacking force they were offering very little. That all changed on the stroke of half time when they came close to taking the lead. The Bohs chance came as a result of a breakdown on midfield as Conor McCormack misplaced a pass and Danny Mandriou took advantage racing away into the City area where he pulled the ball back for JJ Luney, who attempted to place the ball beyond Peter Cherrie and into the corner, but his effort just passed the post, much to Derry’s relief.

Bohs came so close to taking the lead ten minutes into the half when City defender Danny Lupano failed to control the ball on the edge of his own penalty area, and suddenly Kris Twardek was through on goal, lobbing Peter Cherrie, only for Lupano to get back and acrobatically hook the ball off the line.

The goal the game needed finally arrived on 64 minutes and it was one to savour as Mallon, collected the ball deep into the Bohs half and raced into the penalty box before lashing it past McGuinness and into the top corner to the delight and disbelief of the Brandywell.

Bohs pushed in the closing stages but City broke and Adam Liddle set up Figueira who scooped the ball past McGuinness and into the net to seal the win.