We should never, ever, accept defeat 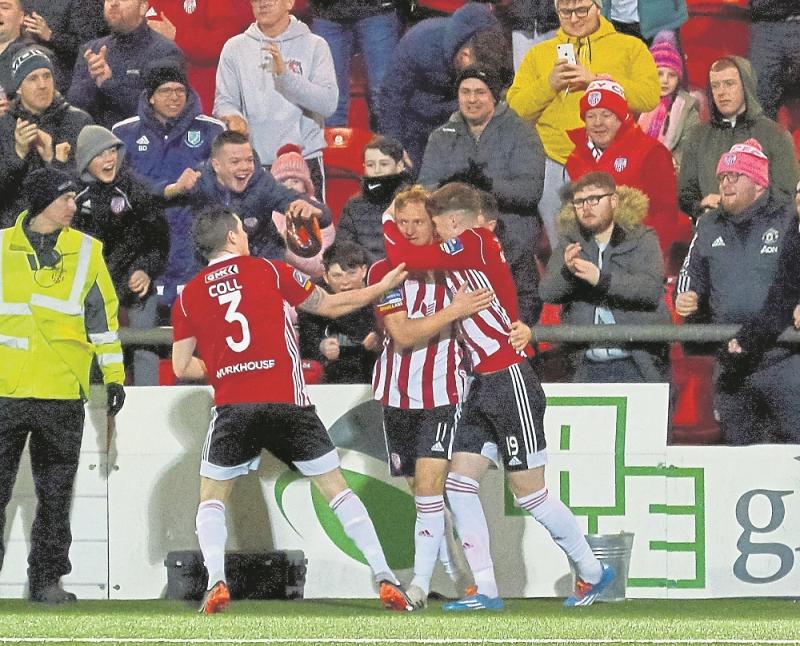 Declan Devine has emphasised the importance of belief as Derry City prepare to host Bohemians tomorrow night hoping to get their first win of the new season.
The City boss was left frustrated by Monday night's postponement against St. Patrick's Athletic, but with a hugely difficult game against Bohs up next, that extra day of preparation could yet pay dividends.
The Candystripes narrowly avoided defeat against Finn Harps last week due to Adam Liddle's last gasp equaliser and Devine believes that the refusal to give up against their Northwest rivals is a good sign heading into another difficult game.
“One of the things that we've done since we've come back into the club is let the players understand how much this football club means to people,” he explained. “You can't accept defeat. You should never, ever accept defeat.
“If you're able to show that comebackability you're never dead; You saw it last year when we were away to Dundalk and away to Shamrock Rovers when it looked as if we were down and out but we came back. There's that fighting spirit.
“It's also got to do with the people who come off the bench. It's about making positive changes to try and get you back in the game. It's all down to the players and their appetite to not want to lose games. You would think that's a gimme in football but it's not and we're very proud that here we don't accept defeat and we keep going to the very last seconds of the game.”
Despite last week's game against Harps being televised, the Brandywell was packed to capacity and the supporters who stayed until the very end got their reward of a late goal. On reflection, Devine believes that the new players at the club may have been slightly overawed at their first experience of thousands of City fans cheering them on.
“These bunch of players back themselves, they are good players,” he continued. “It was a wee bit of a culture shock for them seeing the crowd and the appetite and the expectation last Friday night but I'm definitely sure that they will be ready for it this week.
“The players were absolutely devastated that the game at St. Pat's was called off because they were all going there confident.”

Significant
Both Dundalk and Shamrock Rovers won on Monday night, maintaining their 100% starts to the new campaign. Bohs, who finished just ahead of Derry in third place last season, have also had a decent start, winning two from three. A win at the Brandywell would create a significant gap between the two sides just a few weeks into the season, something which Devine is aware of.
“These are the days in the season where we are all finding our way,” he said.
“We have to make sure that we improve week by week and we can't wait for the games to come because the games are the biggest teacher. They show us what teams are right, what players are right, what formations are right.
“The games will hopefully come thick and fast and hopefully we can start putting points on the board.
“I don't think that anyone is ever going to be too concerned in the opening round of matches. We've had a narrow defeat to Dundalk and we've drawn a Northwest derby so I don't think there's anything overly concerning at this moment in time.”