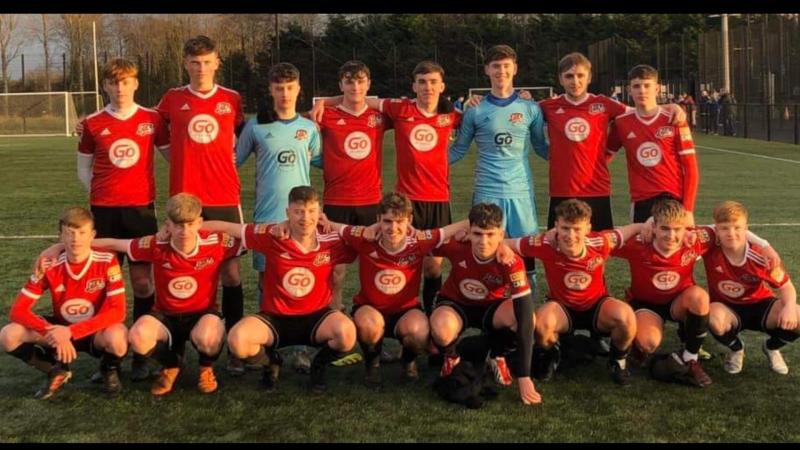 The Maiden City team which defeated Larne at the weekend

This game played at a very wet and windy Vale Centre Greysteel was between the top two in the league going head to head, Larne currently sitting 12 points clear of Maiden City but City having played 5 games less than their opponents.
As expected the start of the game was a cagey affair both teams taking no chances and feeling their way into the game, however it burst into life on the 23rd minute when Tiarnan O Connor latched onto a sweeping cross field pass from Robbie Donnell, Larne Keeper McKenzie Paulie rushing from his goal only for O Connor to cooley lob him from 18 yards to make it 1-0.
From this point Darragh Coyle and Josh Kee were bossing the midfield with Larne now constantly fouling trying to break up the rhythm of the game.
There was a flash point on the half hour mark were City’s Tony Mullan lunged late on Larne’s Thomas Wilson, the Larne bench were incensed but Mullan only received a yellow card for his challenge.
Larne’s first chance of note came on 33 minutes when Owens Burrows and Daniel Mclroy played a nice one two, Burrows with a low shot which Kristian O Hagan was equal to tipping it round the post.
Next to attack for City was wide man Aaron Harvey he dribbled past three Larne defenders only for a last ditch tackle from Scott Mc Bride stopped him from making it 2-0. Harvey sustained a suspected ankle injury and he was replaced by Ryan McCaul.
HT 1-0
The second half started as the first ended with wave after wave of Maiden City attacks, and Paulie in the Larne goal was on hand with a double save first to stop a Brenan Moore volley and then tip Josh Kee’s follow up over the bar.
However it wasn’t long until it was 2-0 and in the 51st minute it was the Donnell, O Connor combo again, referee Ivan South played a great advantage to a late challenge from Larne’s Wilson on Mullan to let Donnell slip in O Connor and the front man made no mistake from 10 yards.
Just 2 minutes later it was 3-0 Brenan Moore getting in on the act with a neat finish from a lovely weighted through ball from Darragh Coyle.
Ryan mc Caul was coming into the game more now and put a teasing cross into the path of Moore again only for him to blaze over from 6 yards.
To Larne’s credit they didn’t give in and had a chance to pull one back on 62 minutes when substitute Adam Hope beat the offside trap only for City’s Jamie Robinson to make a sliding recovery tackle to stop an almost certain goal.
From the resulting corner the ball fell to Matty Hill only for his shot to be blocked on the line by Lavery and then City’s McGill dwindled on the ball outside the box he was dispossessed by Hill and his fierce effort came back off the upright and behind for a goal kick.
Just when Larne thought there was a hint they could get back into the game these were put to bed by Moore who grabbed his second of the game and Maiden City’s fourth from a Ryan McCaul cut back on 69 minutes.
Both Tiarnan O Connor and Brenan Moore were now searching for their hat tricks and it was Moore who took home the match ball running onto a ball over the top from man of the match Darragh Coyle to round the keeper and cap off a dominant Maiden City performance to make the final score 5-0.