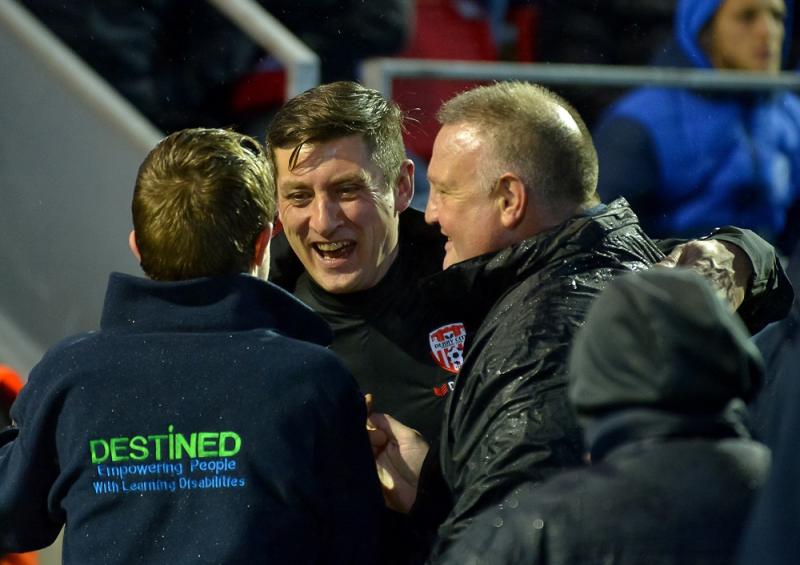 OPTIMISTIC... Derry City have yet to win this season but manager Declan Devine is not panicking.

Declan Devine insists there is no need to panic as Derry City head to St. Patrick's Athletic this evening still looking for their first win of the new season. Kick off 7:45pm.
Adam Liddle's last gasp equaliser against Finn Harps on Friday night prevented the Candystripes from falling to successive defeats at the start of this new season, but they now face a Dublin double-header this week, with St. Pat's tonight at Inchicore followed by Bohemians at the Brandywell on Friday. The start to the new campaign has been far from ideal for Devine and his players but the manager is not downbeat.
“In the grand scheme of things, we have 34 league games to go and a lot of points to play for,” he said. “The next one is always the most important. There are things we were disappointed with on Friday night, there are things we were very positive about the Friday before, but we now have to put all of our focus into St. Pat's.
“We're looking forward to the game and I think the game coming so quickly is very positive for us because we're very fit, we have a very strong squad and we're going down looking to pick points up.”
Bigger things are expected of St. Patrick's Athletic this season, and they recovered from an opening day deefat to Waterford by beating Sligo Rovers 2-0 at the weekend. Devine knows that Pat's are going places under Stephen O'Donnell.
“I think everybody has seen this year that it's going to be a much stronger league,” he said. “Everybody is finding their feet and I think most teams at the minute are still trying to get their best eleven onto the pitch and find a way of playing, and that's the reality of League of Ireland football whenever there are so many changes at every club.
“What I will say about this game is that it's two good footballing sides and two teams who like to play. We'll be going there trying to win the game and I have every belief in every one of the players that's here that we can do a job.”

Struggle
Devine is in no doubt what he wants to see change after watching his team struggle in the final third in both league games so far.
“I want to score goals,” he stated. “I think we have very good attackers.
“The other night we had 80% possession into a gale force wind. I don't think anybody sitting in the stands understands how bad it was. It was horrendous.
“At the same time I thought we were very brave because we kept coming and the way we finished the game, the appetite not to lose the game... I've seen teams in the past here who would have chucked it and thrown the towel in but our ability to get late goals shows that we can finish strongly.
“Ultimately we want to go and we want to perform. We want to keep a clean sheet which we haven't done yet and we want to go down here and win the football match.”
The manager knows his team have not hit the heights as yet, but he is not at all worried despite the return of just one point from a possible six.
“Win your next game and there's no panic. Who's panicking?” he continued.
“We were sitting two points better off at this stage last year.
“It was key that we didn't lose two games on the spin and we go now and try and get our first win and that's the bottom line.”