Liddle denies Harps their first ever league win at the Brandywell 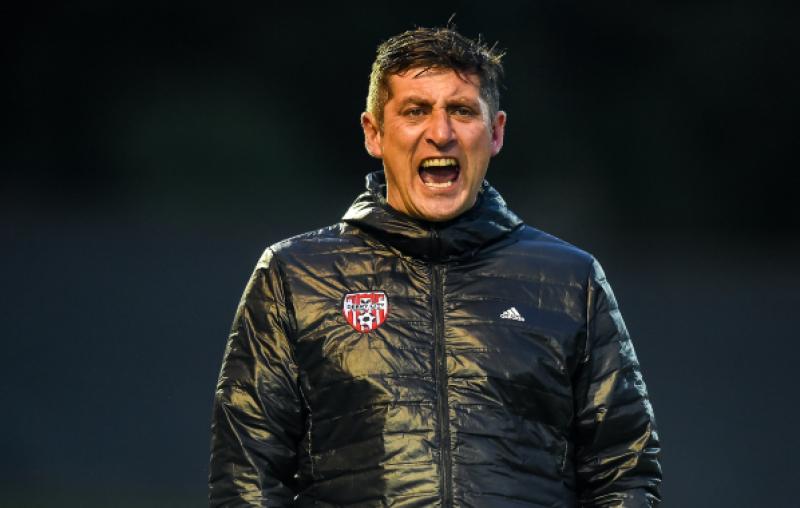 Adam Liddle scored a 95th minute equaliser as Derry City saved themselves a point against Finn Harps in dramatic circumstances.

It looked as if Harps were on their way to their first ever league win at the Brandywell thanks to a first half goal from Ryan Connolly, until a moment of magic from Walter Figueira saw him beat Mark Russell before setting up second half substitute Liddle for the equaliser.

It took nine minutes for City to threaten the Harps goal and it was a simple ball over the top from Ally Gilchrist which opened Harps up. The pass picked out the run of Tim Nilsen who brought it out of the sky before turning and shooting in one movement but it was a comfortable save from Mark McGinley.

Harps were by no means intimidated by a packed Brandywell, but they were fortunate not to go a goal behind on 22 minutes when Jamie McDonagh’s cross was headed out, but only to Figueira 18 yards out. The City forward had time to measure his shot but he got it all wrong, shooting high over the target.

Harps were very comfortable in the game when they took the lead on 34 minutes but it was a gift of a goal for the visitors. Ciaran Coll played a pass from the left wing into no-one just outside his own penalty area, and that left his goalkeeper stranded, allowing Ryan Connolly to sweep the ball, left-footed, into an empty net to make it 1-0.

It was not a case of Harps defending what they had however, as the visitors came close to doubling their lead on 53 minutes, when Tony McNamee’s volleyed pas forward set Karl O’Sullivan one on one with Eoin Toal. The former Limerick striker curled the ball past the defender in an attempt to catch out Cherrie, but the City goalkeeper was equal to it, and pushed the ball behind for a corner.

Tempers were beginning to fray in the game but in the midst of some strong tackles, Derry came close to scoring when Coll burst into the Harps penalty area and pulled the ball back for Conor Clifford who sent a shot past McGinley, only for the ball to crash off the crossbar.

It looked as if Harps had the win until Liddle struck with virtually the last kick of the game to send the Brandywell into raptures.