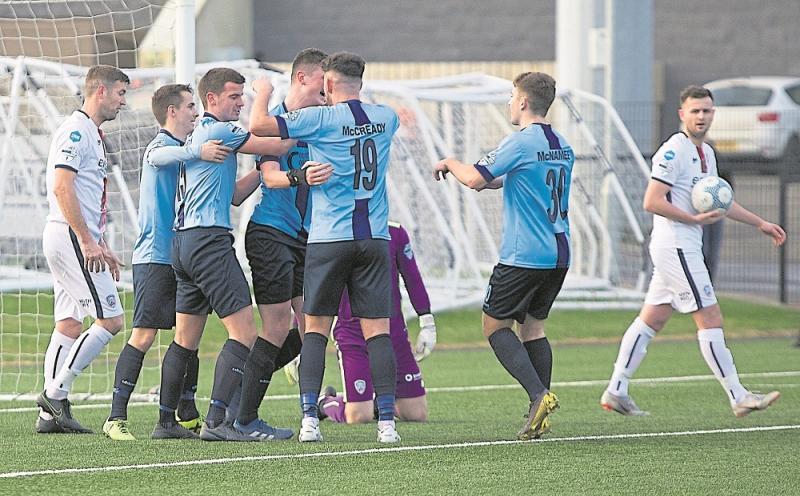 Institute players celebrate a goal during their win over Coleraine back in November.

Institute will be looking to replicate the character and fight they showed at Warrenpoint to do the double over a Coleraine team just crowned League Cup winners.
For ‘Stute, consistency has been their biggest problem all season and despite the lifeline of a point against fellow relegation facing Warrenpoint and a performance that showed real character and fight, they’ll now need to show they can string two performances together and do everything for a season-saving three points.
‘Stute manager Sean Connor believes that the performance at Milltown showed something from the team he’d not seen in weeks previous.
“We showed really good character to come from behind twice, especially in such a big game. The team that got beat at Dungannon when we got beat 0-2, it was 0-0 at half time and we didn’t show anywhere near that fight, that was a much better performance.”
Connor is hoping that the squad can ‘take encouragement’ from their performance and knows they’ll have to correct the ‘flashes of quality and poor football’ his side have shown if they are to avoid relegation.
“They have got to get some consistency into their game but they’ve got to realise that ‘look, there is still plenty to fight for but we need to maintain those standards. If they can take something from that; when they perform at that level, play with that intensity and with that togetherness, anything’s possible.”
The 'Stute boss explained that following the dressing room following the draw at Warrenpoint, there was a sign of mentality change, with the team disappointed not to take all three points.
“It was only after a while that they accepted that it was a good point,” he said. “They wanted to win the game and they were disappointed not to win the game.”

‘Stute’s last win in the league came against Coleraine at the Brandywell last November and Connor is mindful that their opponents will be coming back to rectify that.
“I try and tell our players once a game’s gone, it’s out of the way and done,” he continued. “Good results or bad results, we take the learning experience from every game and we try to evolve as a team. No matter where you are in the league it is always a game and these games are always tight.”
Coleraine are just off the back of lifting the League Cup in a 2-1 win against Crusaders last Saturday, and, despite joking, Connor knows the seriousness of the side they are going up against.
”I hope they all come drunk, with their medals around their necks,” he laughed. “No look, Oran Kearney is too much of a professional, I’m sure his players are too. They’re still fighting for the league title, they’re still fighting for European places so I’m expecting no complacency whatsoever.
“Three points would be magnificent. It would really be such a boost. Three points would absolutely be a perfect scenario, but they would just have to get that out of their minds and keep looking forward.”

With the passing of Manchester United and Northern Ireland legend Harry Gregg this week, Connor took a moment to remember the father of former Institute manager John Gregg and what the local hero meant to the game all around the world.
“Playing in that Manchester United team, you know, I think that man was something for what he did at the Munich plane disaster, rescuing people, going back and getting himself into a situation like that. That speaks more about Harry Gregg than his footballing ability which was obviously top rate.”
Connor remembered meeting Gregg and believes the loss has affected football across the world.
“He came across as very calm and a real gentleman but I’m sure that he had plenty of things going around in his head with what he had done and the friends that he lost. Anytime anyone dies its very sad for the immediate family but in a situation like this, I think it's very sad for the whole footballing community.”