McCormack not downhearted despite defeat 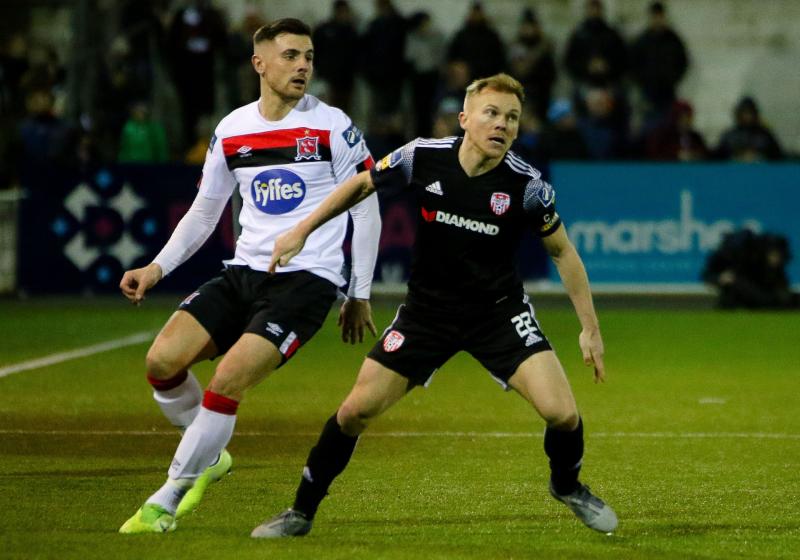 Conor McCormack insists that the Derry City players can hold their heads high despite losing out to Dundalk on the opening day of the new season.
City fell to a 1-0 defeat thanks to a late goal from Dane Massey, just when it looked as if the Candystripes were closing in on an impressive point at the home of the champions.
The nature of the defeat was a tough one to take but McCormack, captaining Derry in his second spell at the club, insisted that there are plenty of positives to take from the experience.
“It’s always tough to come down to the home of the champions and get a win, but we had a game plan and I thought we frustrated them,” he reflected.
“I think we had the best chance of the evening and unfortunately it’s heart-breaking to concede from a set-piece with 10 minutes to go. That’s why they are champions as they never stop and unfortunately the half chance, they got they scored and it’s tough to take. However, we have to go back to the drawing board and take the positives from the Dundalk game into the Harps match.2
The nature of the winning goal in particular was hard to stomach for Derry, who conceded from Dundalk's ninth corner of the game. The champions' threat from set pieces over recent years has been no secret, McCormack admits.
“To be fair their aerial threat is unbelievable and over the years they have got so many goals from set-pieces and I’m pretty sure that’s why they have won so many league titles, as they never stop,” he continued.
“It’s not one of them who comes for the header it’s always someone else, they have four or five big lads, who all get around 5/10 goals from set-pieces a year and that helps them to get over the line each season.
“It’s just unfortunate tonight to put in such a shift and still lose it the way we did, is disappointing, but we’ll take the positives and move onto Friday now. There are positives because there’s a lot of lads who had good performances tonight and they can hold their heads up high, but as I said to come to the home of the champions it’s a tough place to start and some lads were making their League of Ireland debut, so it’s tough.”
Looking ahead
Derry City kick off the new season at the Brandywell this Friday when they hosts Finn Harps, in what is a hugely anticipated game. Harps' victory over Sligo and Derry's defeat to Dundalk adds some extra spice to the encounter.
“It’s going to be a tough game, it always is,” McCormack agreed. “The derby against Harps will be hard, but all the lads are looking forward to it and hopefully we can get our first three points and get us on the board. I believe we have the quality in the squad to do it, but hopefully we can get back to the drawing board and look forward to the game.”
“No one expected us to get a result apart from ourselves and the people in Derry, but as I said we just have to take the positives out of the game and hopefully the boys will go on from strength to strength and get the three points on Friday.”