There is no doubt that of all the players in the Derry City squad this season, there is a gem there in Gerardo Bruna 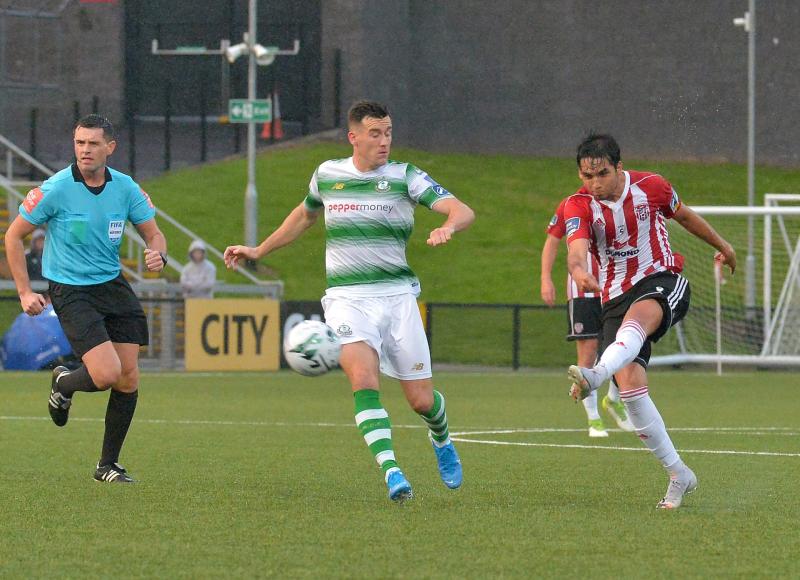 Midfielder Gerard Bruna made his mark in his first season as a Candy Stripe, and he is hoping to impress even more in 2020.

There is no doubt that of all the players in the Derry City squad this season, there is a gem there in Gerardo Bruna.
Bruna was a slow starter at the club last season, looking a useful squad player at best as he started most games on the substitutes' bench. But that changed when he started at St. Patrick's Athletic in April and scored a picture perfect free kick that helped his team on their way to a convincing away win. Slowly but surely Bruna began to have more influence on the pitch and it got to the point where Declan Devine could no longer ignore that fact. Bruna became a regular starter and was hugely influential, his range of passing ability on a cultured left foot key to unlocking defences, as teams such as UCD and Finn Harps found out to their dismay.
Bruna has settled off the pitch as well, his young family loving life in Derry, and that convinced him to sign a new deal at the club. A different kind of midfielder, the type that every successful team needs, Bruna could yet again have a significant part to play. He missed the end of last season with a knee injury, but he is back fit and raring to go.
“I had to work extremely hard in the off season to be in the best shape possible for this coming season and that's what I've been doing,” he explained. “I knew it was going to be a tough off-season because of how I finished the last campaign. I have been working with Mickey (Hegarty) trying to fix what I was carrying and I'm just really happy with the place I'm in now.”
Bruna was involved in some memorable encounters throughout the 2019 campaign and he admitted he was impressed with the standard in his first season in League of Ireland football.
“I would probably say yes, I think it was very good,” he continued. “I have played in a lot of different places, different countries with different levels of football and I was really impressed. It was a nice surprise. I'm looking forward to the season now and hopefully I cam compete hopefully a little bit better than last year.”
Individually and collectively, there are goals for everyone this season, and Bruna is hoping to stay clear of further injuries so that he, and his team mates, can strive to build on the giant strides made last season.
“I feel good,” he insisted. “I tried to do the best I could and try to do what the staff wants me to do by helping the team, distributing the ball and moving it around and helping the players in front of me create chances so that's what I'm going to keep doing. I'm going to keep working hard and enjoying it and hopefully I can do well.
“We achieved Europe last year and hopefully we can achieve it again this year. We probably want to a little bit better. Obviously we don't want to put too much pressure on ourselves but I do think we can, with the lads that have come in and the squad we have this season, I think we can do really well. Let's not just say it, but go out there and do it.”