It just doesn't get any better for Institute, who are now bottom of the Danske Bank Premiership after their latest defeat 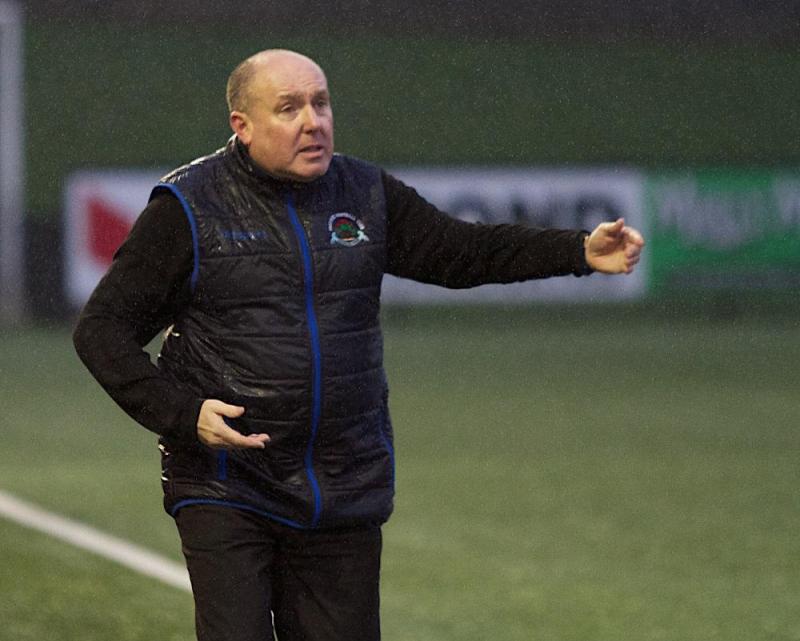 Institute boss Sean Connor watched his side fall to another defeat on Saturday.

It just doesn't get any better for Institute, who are now bottom of the Danske Bank Premiership after their latest defeat, this time against Dungannon Swifts at Stangmore Park.
Sean Connor will lead a side out for the annual Billy Kee Memorial Cup match against Derry City but the 'Stute boss will have much more concerning issues on his mind, after watching his team fall to their ninth defeat in 11 games in all competitions since the start of December. 'Stute also drew a blank in terms of goals for the seventh time in that period, and with Warrenpoint grabbing a late win at Carrick, the Blues have now slipped to last place after several weeks of treading water.
It is a concerning time for Connor and his and with a game against the Point just a few weeks away, they will be hoping to get a win out of somewhere before that huge six-pointer.
Whilst 'Stute improved in the second half of Saturday's game, they did not do enough to test home goalkeeper Conor Byrne throughout, and not for the first time this season, indiscipline in their own penalty area cost them as they conceded yet another penalty.
Connor made a number of changes as he tried to freshen things up, bringing in Conor Tourish, Cormac Burke and Ahu Obhakhan for Evan Tweed, Oran Brogan and Alex Pomeroy, who all dropped to the bench.
New signing Obhakhan almost gifted Dungannon a goal as early as the fourth minute as his pass found Caolan McAleer, but the ex-Finn Harps man's long range drive failed to trouble 'Stute goalkeeper Rory Brown.
The last two games between these sides had been memorable for all sorts of reasons, but this was not following suit as both teams struggled for inspiration, half chances falling for Dungannon as Terry Fitzpatrick's tame effort was easily gathered by a diving Brown before the Stute goalkeeper saved from Hughes from distance.

Half Time 0-0
'Stute upped their efforts after the break and they finally tested the hosts when Joe McCready's low drive was saved at the second attempt by Swifts keeper Byrne.
That was the beginning of the best period in the game for the visitors and just before the hour mark Curry's header from Burke's left wing corner caused problems for Swifts, who somehow scrambled the ball awya from danger.
'Stutre's vulnerability at set-plays cost them dearly just after the hour mark when Dungannon finally broke through, McAleer's cross finding King at the back post who powerfully headed home. That changed the momentum of the game and the lead was doubled just over ten minutes later when Tourish brought down McAleer inside the box, leaving referee Tony Clarke with no option but to point to the spot. Douglas Wilson made no mistake with the resulting penalty, drilling the ball low into Brown's bottom left hand corner to seal the points.
'Stute had no answer and Swifts should have added a third when Hughes fed an unmarked McAleer, but with only Brown to beat, the winger fired wide with the goal at his mercy.
In the closing stages Gareth Brown went close to grabbing a consolation as his snap-shot beat Byrne but flashed just wide.