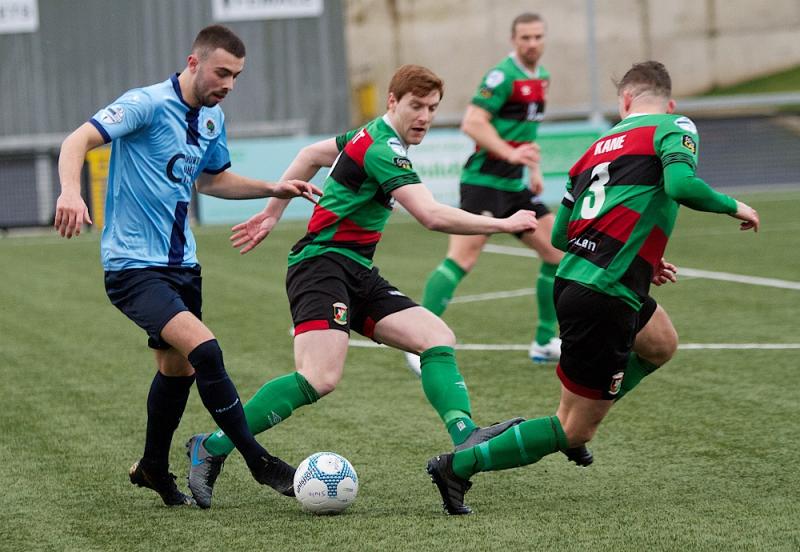 Institute manager Sean Connor admitted there were a lot of positives to take in spite of the result as his side went down 2-0 to Glentoran on Saturday.
The win lifted the Belfast outfit to the top of the table, while Connor’s side continue to languish just above the bottom spot.
First half goals from Navid Nasseri and Keith Cowan secured the points for the visitors, and Connor admitted that the concession of both goals was disappointing, though he is hoping for a replica of the performance when ‘Stute travel to Dungannon this weekend.
“I’m disappointed with the result but the level of performance was quite good. Both of the goals were a bit unfortunate in a sense. For the first, if Ryan Morrow doesn’t fall in the build-up I don’t think they’d score and then for the second the free kick has bounced just before the keeper and they reacted quicker,” Connor told the Derry News. “For them to be sitting top of the table and for us to be where we are, the gulf wasn’t massive.
“If we can perform like that against the teams in and around us, then we’ll be fine. Sometimes when we play the teams around us we don’t perform like that, so we just need to keep our cool.”
Connor also admitted that the timing of the second goal just before half-time really knocked the wind out of his side’s sails.
“At 2-0 it’s a difficult game. Their game management was very good in the second half,” he said. “We huffed and puffed without really creating as much as we did in the first half when we had two or three really good chances. The difference was that when they got their chances, they were clinical.”

CHANGES
Glentoran, with former Finn Harps captain Cowan amongst three debutants, made the brighter start to the game, with Marcus Kane trying his luck from 35 yards after three minutes, but it blazed high and wide of Rory Brown’s goal.
Mick McDermott’s men were playing some slick stuff, and Kane played a crossfield pass to Hrvoje Plum that the Croatian fizzed across the face, but Aidan McCauley got a boot to it to clear.
A foul on Alex Pomeroy by Kane earned the home side their first opportunity on ten minutes, but Evan Tweed’s delivery was taken off the head of a free Graham Crown by Caolan Marron.
It was ‘Stute who had the first real chance on 18 minutes when Tweed slid a lovely ball in behind for Gareth Brown who beat Marron before squaring it for McCauley who was completely free at the back post, but on the stretch his left footed effort was blocked by Marijan Antolovic for a corner that came to nothing.
It wasn’t long before they were punished for that miss as Glentoran took the lead on 20 minutes. An unfortunate slip from Ryan Morrow allowed Elvio Van Overbeek to latch on to Robbie McDaid’s pass, and after his floated cross was missed by Andy Mitchell, Navid Nasseri picked it up, jinked inside and finished to the bottom corner.
‘Stute enjoyed a spell on top midway through the first half, and on 27 minutes Tweed and McCready linked up before the latter picked out McCauley in acres of space. He was allowed to run at the Glens defence before unleashing a drive from 30 yards, but it went wide of Antolovic’s left post.
Nasseri’s free role and movement was causing the home defence problems, and on the half hour mark he drew a save out of Brown with a rasping shot into the former Wolves man’s chest.
Antolovic then collected a weak header from Alex Pomeroy after Tweed’s free kick was nodded on by Dean Curry before a quick counter from the visitors ended with Christopher Gallagher slicing one over the top.
Glentoran had regained control, and on 40 minutes debutant Marron swung a pinpoint ball deep to the back post where McDaid got his head on it, but the angle was too tight and Brown got behind it.
The Belfast men made it 2-0 on 43 minutes when Tweed fouled Plum from behind. He tried to catch ‘Stute out by going for goal, and after Brown scrambled across to make the initial save, Keith Cowan was the man alert to finish to an empty net.

Half-time
Institute 0
Glentoran 2
The visitors started the second half on the front foot, and inside two minutes Andy Mitchell whipped a ball into the box for McDaid, but he couldn’t make a proper connection as it bounced wide.
The same pair linked up on 51 minutes, with McDaid controlling well on his chest ten yards out, but he volleyed over the top, with Nasseri also off target with a long distance attempt five minutes later.
‘Stute had the ball in the net on 57 minutes as Aidan McCauley’s free from midfield sailed over the crowd to the net, but Alex Pomeroy was adjudged to have fouled Antolovic in his attempt to claim it.
Sean Connor then made his first substitution, with Ahu Obhakhan replacing McCready, and he could have made an instant impact on the hour mark when McCauley picked out Pomeroy who held off Garrett before squaring for his strike partner at the back post, but it was just too far ahead of him to get a strong foot on it.
On 65 minutes a long throw from Crown made it through to Tweed, but shot was blocked by Marron while moments later Morrow put in a strong tackle on Van Overbeek to win back possession and set up Brown – but his right footed strike floated over the bar.
To their credit, ‘Stute kept pressing for a goal and on 85 minutes Cormac Burke played a long ball for Pomeroy to chase. He did well to turn on to his left but his shot sailed wide of the left upright.
The Glens were pressing too, however, and Robbie McDaid tested Brown in the final minute of normal time with a well-placed header from a Kane cross, but the shot stopper held on well.