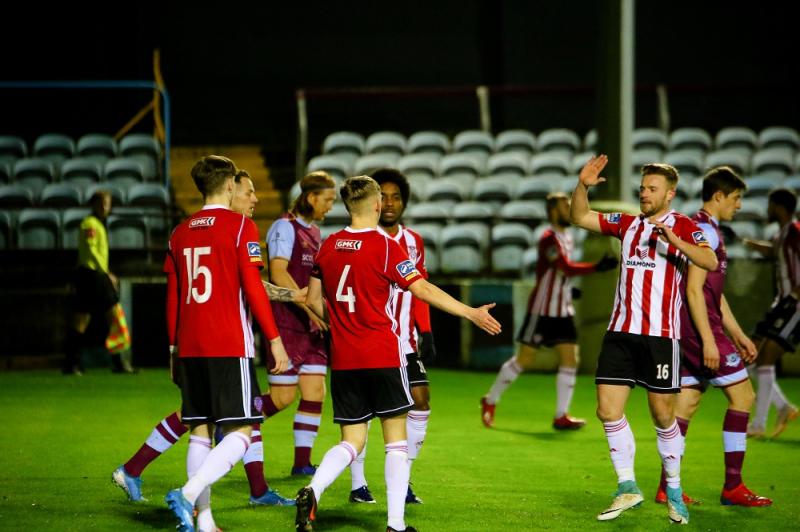 OFF THE MARK... Ciaron Harkin is congratulated after opening the scoring. Photo: Kevin Moore.

It was a baptism of ice for the new faces at Derry City on a baltic night at Drogheda United as the Candystripes kicked off their pre-season campaign with a victory at United Park.
Conditions were far from ideal at Friday night's game and certainly gave the players something to think about in a game that proved a useful run out for both sides, with Declan Devine hoping to build on his team's success in 2019, whilst his opposite number Tim Clancy will be hoping to take the Drogs one step further after their promotion play-off defeat to Finn Harps.
There were a number of new faces on show for both teams but for those in red and white it was a chance to see the four new signings in action. Walter Figueira showed that he has plenty of energy to match his skill, Conor Clifford's penetrating runs into the opposition's penalty area will be a threat, Conor McCormack looked as composed as ever in front of defence, whilst Sheffield United loanee Stephen Mallon could add considerable threat down the left hand side in the absence of Junior Ogedi-Uzokwe.
There were a number of trialsts as well, as there tends to be at this time of year, and those on show certainly gave Declan Devine and his team somethimng to think about. German-Austrian Daniel Raische, a friend of former Candystripe Lukas Schubert, can play in a number of positions and with versatility high on Devine's A-list, that could work well in the defender's favour should he continue to impress.
Colm Horgan meanwhile, looks a shoe in for the right back spot in place of the injured Darren Cole. The experienced full back has been training with Derry a number of weeks now and with Devine openly admitting his interest this weekend, he could well officially be unveiled at the club soon enough.
Another to keep an eye on is Dutch trialist Rodney Kluster who, like Raische, showed his versatiity, playing at right back in the first half, before moving into midfield when Horgan appeared after the break.
These players and more will likely feature in Wednesday night's game against Finn Harps at the Brandywell, with Devine still hoping to bring four or five new players to the club before the season kicks off against Dundalk on February 14.
One other positive for City fans is the return of midfielder Jack Malone, who made his first appearance since picking up a long-term injury towards the end of last season.

Early goal
The only goal of a quiet game came early on and it came from the first real chance of the game as a ball cut back from the left was missed by Drogheda defender Hugh Douglas. That allowed the ball to fall into the path of stand in captain Ciaron Harkin who fired goalwards from eight yards, finding the bottom corner despite goalkeeper Ross Treacy getting a strong hand to the effort.
Freezing cold fans hoping that would be the sign of things to come were to be left disappointed although there were some notable moments for both teams.
Drogheda’s first effort came three minutes later as Luke Heeney, playing at right-back in the first half, found Doyle with a long diagonal pass. Doyle beat his man easily but saw his shot take a big deflection, bouncing comfortably into the hands of Nathan Gartside.
James McDonagh, who looked lively throughout, met a cross from the left acrobatically on the edge of the box but saw his effort bounce wide of Treacy’s goal.
Debutants Figueira and Mallon also looked threatening, and good play by Figueira on the edge of the box created an opening as he cut the ball back to Mallon but his shot was straight at Treacy.
Kluster was lively throughout for Derry, finding Clifford on the half hour mark, but the former St. Patrick’s Athletic player fired his effort well over the bar.
The momentum of the game disappated somewhat as Drogheda made ten changes at half time, whilst the team in red and white made a total of nine throughout the second half.
It was the home side who had the first chance of the second half as Conor Kane and James Clarke linked up but Clarke’s shot was saved by Gartside.
Derry were threatening a second and Harkin and Kluster had shots from distance whilst Drogheda hoped to create opportunities from set pieces.
Luca Gratzer was then called into action twice in quick succession, first to deny Harkin with a great fingertip save after Drogheda had given the ball way cheaply from a free in their own box. Two minutes later, Derry were awarded a free with Gratzer this time diving low to his left to deny Stephen Mallon.
Drogheda almost found a late equaliser as a slip from Raische saw Chris Lyons in on goal but Gartside was quick off his line to deny the forward.
It is Finn Harps up next for Derry City and a chance for Brandywell fans to see just who might be lining up for their team permanently in 2020.