Sean Connor got the improvement he asked his players for, but 'Stute ultimately left Mourneview Park disappointed 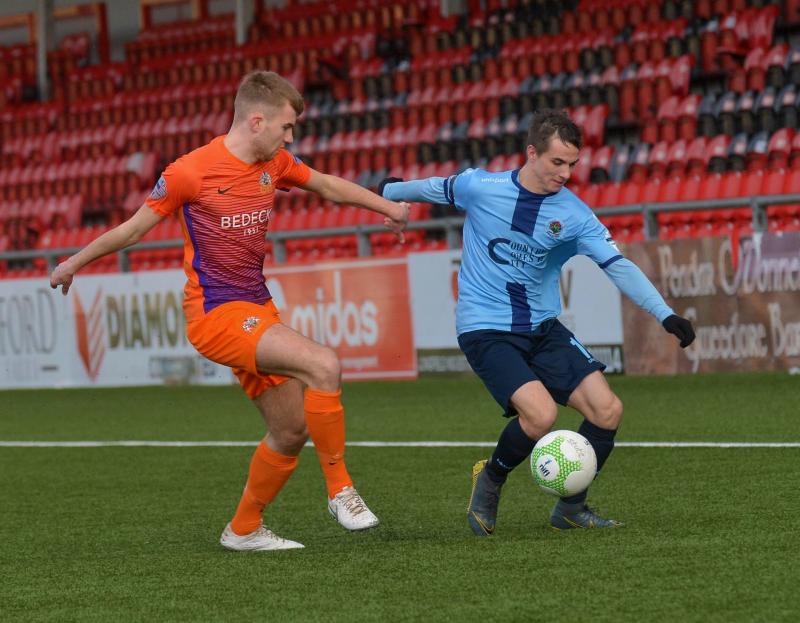 Institute picked up a point against Glenavon, but it could have been three.

Sean Connor got the improvement he asked his players for, but 'Stute ultimately left Mourneview Park disappointed after letting a two-goal lead slip late on Saturday.
The 'Stute boss was furious with his players after the Irish Cup defeat to Dungannon Swifts at the Brandywell, warning that some of his players were playing for their futures. Midfielder Niall Grace has already left to join Bonagee United, and others could follow suit in the coming weeks as Connor demands more. He got his wish in part on Saturday, as his team came close to causing a huge shock at Glenavon.
Without a win in eight games, 'Stute were headed to only their second league win of the season thanks to goals from Joe McCready and Alex Pomeroy, but second half replies from Daniel Purkis and Chad McClockey ensured the away side had to make do with a valuable point in their fight against relegation.

Penalty
As expected, the game started with Glenavon on top and they should have taken an early lead as Josh Daniels found Dylan Davidson down the left, but the winger's low drive was saved by Rory Brown.
After that early scare the Waterside men took the lead on 13 minutes from the penalty spot after Alex Pomeroy was brought down inside the box by Seamus Sharkey, a very late tackle by the former Derry City defender, which gave referee Christopher Morrison no choice but to point to the spot.
Striker Joe McCready stepped up for the sixth time this season from 12 yards and calmly side footed low into the bottom right hand corner to give his team the lead.
Glenavon pushed forward in search of an equaliser minutes later as Daniels' right wing cross found Moorhouse at the back post, but the former Shelbourne man, saw his close range strike hit the side netting.
Just after the half-hour mark Sharkey went close to making up for giving away the penalty, but the ex-Sligo Rovers man's shot from just inside the six yard box, was saved by a combination of Rory Brown and Curry.
The home side were well on top and they went close to levelling things just before the break, but after a scramble James Singleton's header was nodded over the bar by Curry.

Half Time 0-1
The dominance continued after the break and Glenavon should have levelled when Sharkey’s close range header flew off target, after Sammy Clingan’s corner had picked out the defender.
Institute were hanging on but they should have doubled their advantage two minutes later after McCready released Pomeroy, but the young striker’s side footed strike from close range was saved by Tuffey.
Pomeroy made up for the miss just moments later as the visitors stunned the home side by going two goals in front, the young striker waltzing through the home side’s defence, before cooly side footing home past Tuffey.
Glenavon were lucky to be in the game as another opportunity came and went for 'Stute, but after a super turn inside the box Gareth Brown, he was denied by smart Tuffey save.
The hosts did pull a goal back on 69 minutes as Caolan Marron’s right wing cross into the near post was superbly turned home by an unmarked Purkis, giving the home side a lifeline.
'Stute were unable to hang onto their lead however as McCloskey levelled things on 81 minutes as Clingan’s corner was headed goalward by James Singleton and it was the substitute who eventually forced the ball over the line.
Deep into stoppage time Glenavon should have won the game as a chance fell for Daniels, but after getting free inside the box the winger fired just wide with the goal at his mercy.
All things considered, this was not a bad point for Institute.