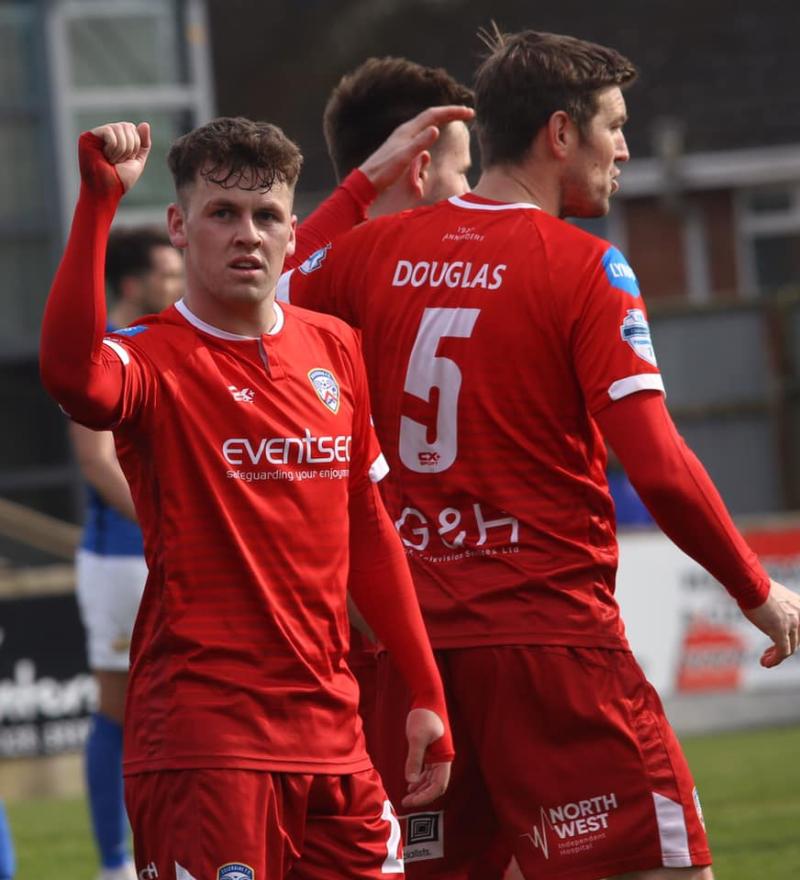 SEVEN UP ... Ben Doherty has now found the net seven times for Coleraine this season.

Ben Doherty admits that a 'change in mindset' is behind his sensational form with Coleraine this season.

The former Derry City man has found a new lease of life at the Showgrounds, and is currently the club's top goal scorer this season with seven in all competitions, two of which came in Coleraine's 3-0 over Warrenpoint at the weekend. Doherty has been on fire with the Bannsiders this year, his 14-second goal against Linfield one of many highlights for the 22-year-old, who is looking at the game with a fresh perspective.

“I think I've just found a bit of confidence in myself,” he explained.

“I have let the shackles off and stopped putting pressure on myself to do well and just do what I do and it's working well for me. It's a change in mindset more than anything – I'm just back to enjoying my football. Instead of worrying about it and beating myself up, I just play now with a smile on my face and it's working well for me because I'm scoring and setting up goals and I just want to keep doing that.

“I've cemented a place with Coleraine now and there is a bit of stress off me now. I can just go out there and express myself and that's what I'm doing.”

The victory over Warrenpoint took an undefeated Coleraine to within three points of league leaders Crusaders ahead of a huge fortnight for Doherty and his team mates.

We have our own targets,” he continued.

“Oran always says that we have to beat the teams below us if we want to stay at the top end of the table, especially going into two big games in the next two weeks against Crusaders and Linfield. We just want to go into those games with a bit of confidence.

“We have that unbeaten tag that everyone is giving us now at the minute. Someone will eventually beat us but we don't think about that too much and we'll just go into these games with the confidence we've had since the start of the season.”
Six points from that double header would certainly have people talking about Coleraine as potential title challengers but Doherty is remaining grounded.

“The aim for us, as players especially, is to improve on the season we had last year,” he stated. “People will start talking about Coleraine being in the title chase but if we come into Christmas and we're still around the top.

“We just have to put ourselves in the best position. In saying that these two games against Crusaders and Linfield could shape our season. It's going to come down to teams taking points off the teams around them at the top of the table so we need to take as many points as we can.”

Doherty meanwhile, admits that he still harbours ambitions in football, be it with a team in England or even another opportunity with his home town team Derry City.

“It's a short career so I'll just keep playing the football I am playing at the minute and if anything comes of it then happy days,” he said.

“If I get that bit of recognition then why not give it a go? If Derry came back in for me there would have be be some sort of agreement with my work because I work full time but I would never say never.

“I wouldn't turn my back on the club, but I'll stay open minded. At the minute I'm happy enough with Coleraine and hopefully I can keep doing well with them.”