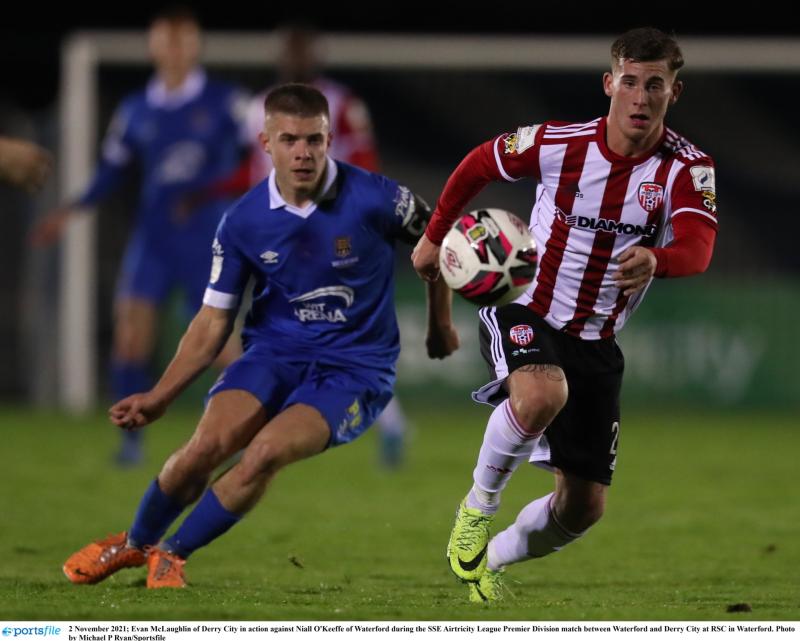 Derry City saved a point at the RSC.

Derry City left it late again as Cameron McJannett struck a 93rd minute equaliser to save a point against Waterford.

The defender, without a goal since April, picked the perfect time to end his long wait for a goal as he volleyed in to save Derry a point after a disappointing performance on the road.

Derry suffered the worst possible start as they conceded within 3 minutes, Jack Satafford’s cross from the left met on the run by Junior Quitirina, who drilled the ball past Nathan Gartside into the net from 15 yards.

Derry were offering little in attack but they equalised against the run of play on the half hour. The goal owed everything to James Akintunde, who seemingly had nowhere to go in the corner, but he managed to squirm away from two Waterford defenders before crossing all the way to the back post where Danny Lafferty arrived to fire in his sixth goal of the season.

The joy was short-lived however as Waterford restored their lead within 10 minutes. A free kick into the Derry area set up Anthony Wordsworth, who headed across the face of goal to Greg Halford, who directed a header into the net to make it 2-1.

Derry struggled to create anything in the second half and Gartside kept Derry in the game late on in as John Martin broke into the area, but the midfielder’s fierce shot was brilliantly parried by the goalkeeper.

That proved a decisive moment in the game as three minutes into four added on, Joe Thomson swung a corner into the area and the ball fell for McJannett, who volleyed the ball high into the net to save a point for the Candystripes.