Making his next move 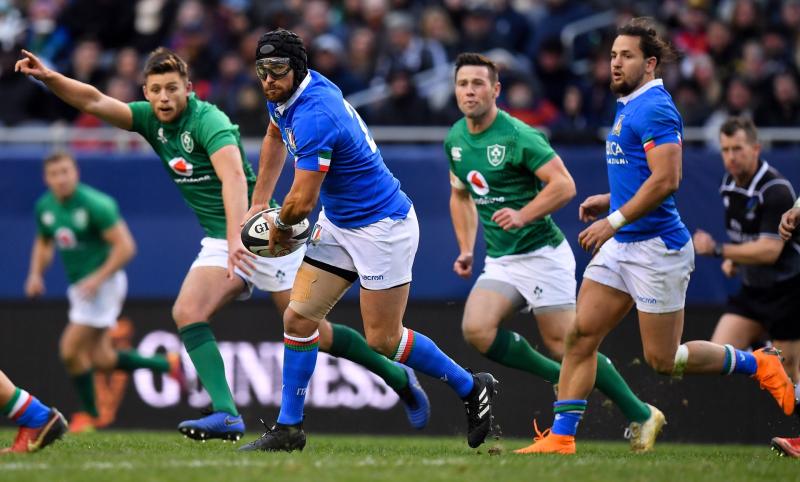 The excitement in Brian Smyth's voice tells it all. Rainey's Director of Rugby is delighted. They've got their man. After a selection process, attracting many candidates, Ian McKinley's credentials elevated him to top of the pile.

One thing the Rainey players will know, beyond anything else he brings to the table, their new Head Coach has experienced adversity and came through the other side. Real adversity, the sort that stops most. But not Ian McKinley.

Loss of sight in his left eye forced him to tell Leinster coach Joe Schmidt he could no longer play. Leinster stood by him, offered him a shoulder to lean on long enough to secure a coaching role in Italy.

Once there, a new set of goggles and the unrelenting support of his family saw him find an avenue back to a playing career that saw him play to a level where he could retire again. This time was different, it was on his own terms.

It was always sport for Ian McKinley. His father Horace was captain of both Trinity College Dublin and Old Wesley rugby teams, his mother Pam played hockey.

The youngest of four, began his sporting adventure on the Gaelic field, at the age of nine, with leading Dublin club Kilmacud Crokes.

When the club won a first ever All-Ireland U14 Féile title in 2003, Ian was centre back. Behind in the corner was Rory O'Carroll who would later pick up two All-Stars as part of Dublin's all-conquering blue wave. The fulcrum of the attack was none other than Ireland rugby international Ian Madigan.

“That was by background, even though I always wanted to play rugby,” McKinley points out.

The back garden of the family home was a haven for kicking goals and scoring tries, but it wasn't until he went to secondary school that his rugby came on the radar. St Columba's College wasn't a rugby superpower, but it gave Ian a footing.

He played Gaelic football for Dublin underage teams as far as U16, before it was time to decide which route to go down

“I made a decision in my last year of school, which way to go and my heart was with rugby,” points out Ian, who was awarded a rugby scholarship at UCD.

The day after his last exam in St Columba's, near the home and close to Dublin's Marlay Park, he was accepted into the Leinster Rugby Academy and trained with stars like Brian O'Driscoll.

“You'd be training with the boys you'd been watching on telly for the last 10 years,” he added. “It was a baptism of fire and you have to learn fairly quickly.”

Just when all the pieces of the puzzle were slotting into place, a freak injury in UCD's top of the table clash, at home to Lansdowne, turned Ian's world upside down.

“I got a boot from my teammate who stamped on my face, his stud went into my eye and burst my eyeball. It was a strange one to say the least”, he recalls.

After being rushed to hospital, he received emergency surgery and remained there for a week.

“The surgeon was incredible,” states Ian, who had 50 percent of the sight back in his eye inside six months and was back training with Leinster ahead of the new season.

There was another setback to follow. In his documentary Look Beyond, on Amazon Prime, Ian recalls going to kick a conversion after a Leinster try and the ball being more fuzzy than normal. It was a result of a developing cataract and later a detached retina left him, at the age of 21, with no vision in his left eye.

“I spoke with Joe Schmidt and said 'I can't continue' as my eye was really sore and to play out-half with 50 percent vision would be too tricky,” adds Ian. Getting his 'good eye' gouged on the first game of his comeback led to the alarm bells ringing.

“I thought I am never going to step onto a rugby field again without protecting my eyes. Rugby is a big part of my life, but it is not my whole life.”

Ian is thankful for Leinster who kept him on board with 'work experience' where he got a taste for coaching some of the junior teams.

He 'loved' coaching, but playing was the 'ultimate goal', the childhood dream of playing in the garden, thinking of playing on the big stage.

“That's what was eating me up, not fulfilling my potential...to stop at 21 was pretty hard,” he said.

It was time for a fresh start. New Zealand or Australia would be too far, but he just wanted to get away from Ireland, somewhere completely different.

The call came from Udine close to the Italian border with Slovenia. Leonorso offered him an opportunity to coach. His girlfriend Cordelia Mulholland, now his wife, travelled with him on a new chapter in their life.

“It just seemed like a chance to learn a new language, to how rugby is viewed...I fell in love with the place, I still love the place,” explains Ian. The weather, food and wine weren't bad either.

In 2013, following a conversation with his brother Philip, thoughts flickered to the possibility of prototyping rugby goggles. By January the following year, Ian had acquired the first pair and was keen to test them out.

On a wet night in action for Leonorso, the goggles passed the test. His muck-clad body was irrelevant, Ian was back playing rugby on a night of redemption.

As his form picked up, semi-

professional side Viadana came calling and he'd later become the club's captain. He'd later play PRO12 rugby with Zebre, before getting snapped up with Benetton Treviso.

McKinley's meandering path had also met another roadblock. France, England and Ireland didn't accept the goggles as being safe for use.

Zebre were due to play a game in Ireland, but a letter of request, to weaar the goggles, was rejected. It was time for clan McKinley to join forces on a campaign of meetings, petitions and various appeals before eventually getting the goggles 'over the line' and accepted.

“They give me confidence that nothing was going to happen to my other eye,” Ian states.

“It made my vision a little bit worse...the padding meant I could see 10 degrees less. People think it enhanced my vision, it made it worse.”

There was time for one more step. Having played three years in Italy and while having played for and captained Ireland U20s, he didn't play senior and was eligible for the Italian national team.

With a nine-game losing streak hanging over them, Italian boss, the former Ireland player, Conor O'Shea handed McKinley his international debut against Fiji. Leading 16-10, he marked his first outing with a late penalty in one of nine international appearances. Another one was against his native Ireland the following year in Chicago's Soldier Field.

When his contract with Treviso expired last year and thoughts turned to the future. He now lives in Cordelia's native Bellaghy. The couple welcomed their son Malachy into the world last December.

On the rugby front, McKinley – who had spent time coaching under John Andrew at both Ballymena and Rainey - began to ponder. Was 2020 his last dance?

“It is not something you think of all of a sudden, it is your whole livelihood, it takes over your life,” he said of his decision to retire a second and final time.

“All you can focus on is getting your body right, your mind right for the week. There is no rest time and you are constantly on the go.

“It was something I reflected on,” Ian continued. “I said to myself when I initially went back and played and was lucky enough to play rugby a second time, I wanted to retire on my own terms and at as high a level as I possibly can.”

Champions Cup. PRO14. Six Nations. Those three boxes have been ticked, with the landscape around the next corner uncertain.

“I can be very content with what's happened,” he sums up. “The biggest thing is that you have thousands of players using these goggles now...which has been the biggest triumph out of all of this. You have kids and adults that are now participating in rugby, which has been amazing.”

Retiring is never easy. But McKinley has never been one to sit still. Monday, April 12 and getting Rainey out in groups of 15 to begin training for the new season is the next step. The new adventure excites him.

“It's nice, having been in a professional environment since 2008/09, to go back to grass-roots rugby, to touch base again with why you started rugby,” he concludes.

Rainey have made quite the catch.