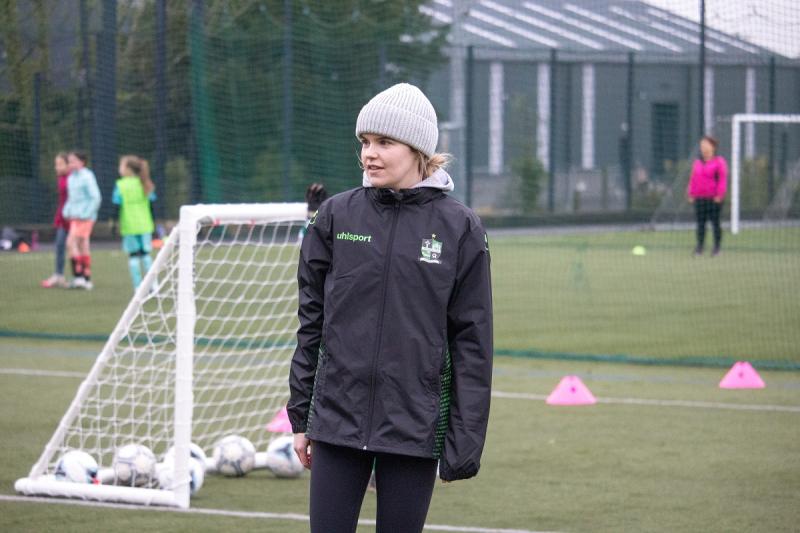 A place on QUB's Mechanical Engineering Masters course opened more doors than just study for Draperstown Celtic's Niamh Tohill.
The 20 year-old had previously played camogie for her native Swatragh. While a student in St Patrick's Maghera, she played on the school's first Ladies Gaelic Football team. She is a walking advocate for ladies sport, getting involved and trying to promote it.
There is no hiding her enthusiasm. A break from her studies to talk all things football lifts the lid on her sporting knowledge and an obvious passion for the exciting developments at Draperstown Celtic.
“Sport is great, not just for the physical aspect, but there are the mental health benefits too,” explains Niamh.
Student life in Belfast gave her an opportunity to try her hand at soccer with Queen's, something she had longed to do. A grand-daughter of former Draperstown Celtic player Malachy McGuigan, Niamh qualified as a Level 1 coach in the autumn and is now coaching the underage players in the club's Diamonds' Ladies team and is part of the recently formed senior team. 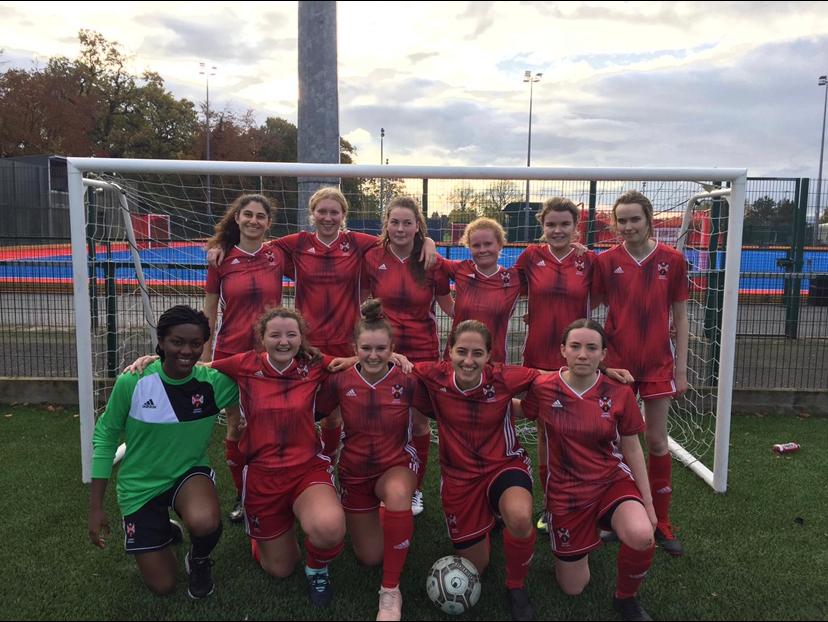 Niamh, back row second from right, pictured before a QUB game.

Her placement has already been secured in the Dublin branch of international pharmaceutical giants Alexion secured for next year.
Sunday mornings are the perfect getaway from the stresses of revision.
“I even had an exam on a Monday and I went to DC on Sunday, the buzz you get ,lifts your mood so much...that escape from everything else,” Niamh points out.
Her camogie career took her up the underage ranks to senior level. An injury forced her out of action and with her A-Levels on the horizon, study took preference.
With no soccer clubs on her doorstep, travelling to Cookstown-based Mid Ulster Ladies wasn't feasible.
“It was a great team and they were lovely there, but I just couldn't balance it,” Niamh adds. “Now I have got involved with DC, it is only down the road and my Granny and Granda live in Draperstown.”
It wasn't until the age of 18 that she began her soccer career with Queen's.
“I just thought 'I have the opportunity now to start something I wanted', I joined their team in 2018 and I haven't looked back since,” Niamh points out.
“Every evening, you were looking forward to training. You make friends for life and it is such a great sport.”
When Chairman Paul McCallion floated the idea of a ladies' team in Draperstown, she jumped at the chance. There was no second thought required.
“I want to give the younger ones the opportunity from that age to be able to play football instead of waiting until they are 20. The atmosphere around DC, you couldn't get nicer people,” Niamh enthused.

Despite having her coaching qualification tucked away, the sporting lockdown kept her itching to get started. Enthusiasm morphed into frustration.
“I was raging because there was no sport and I wanted to get straight out into it,” Niamh adds.
“For me, coaching is so rewarding. Even when you are taking the session, at the start the players are a bit timid, but by the end of the session, especially the young ones, you can see how much they have progressed. For me, that gives me a real buzz.”
“They are playing with their own age group, (all) with girls. Through the years, they'll build a team with each other.
“I have learned so much from the last two years, so imagine young girls learning the game from a young age. The love of the game and even building a team with each other.”
In her younger days, she remembers her Granda Malachy taking her to the St Colm's Draperstown school and Ballinascreen camogie teams he was involved in. There is a photo doing the rounds of a young Niamh, as a mascot, perched at the front of a team photo.
Niamh's love for soccer came from watching the US women's national team and their promotion of the game. The Los Angeles based Angel City team, starting up in 2022, will be the 11th team in the National Women's Soccer League. 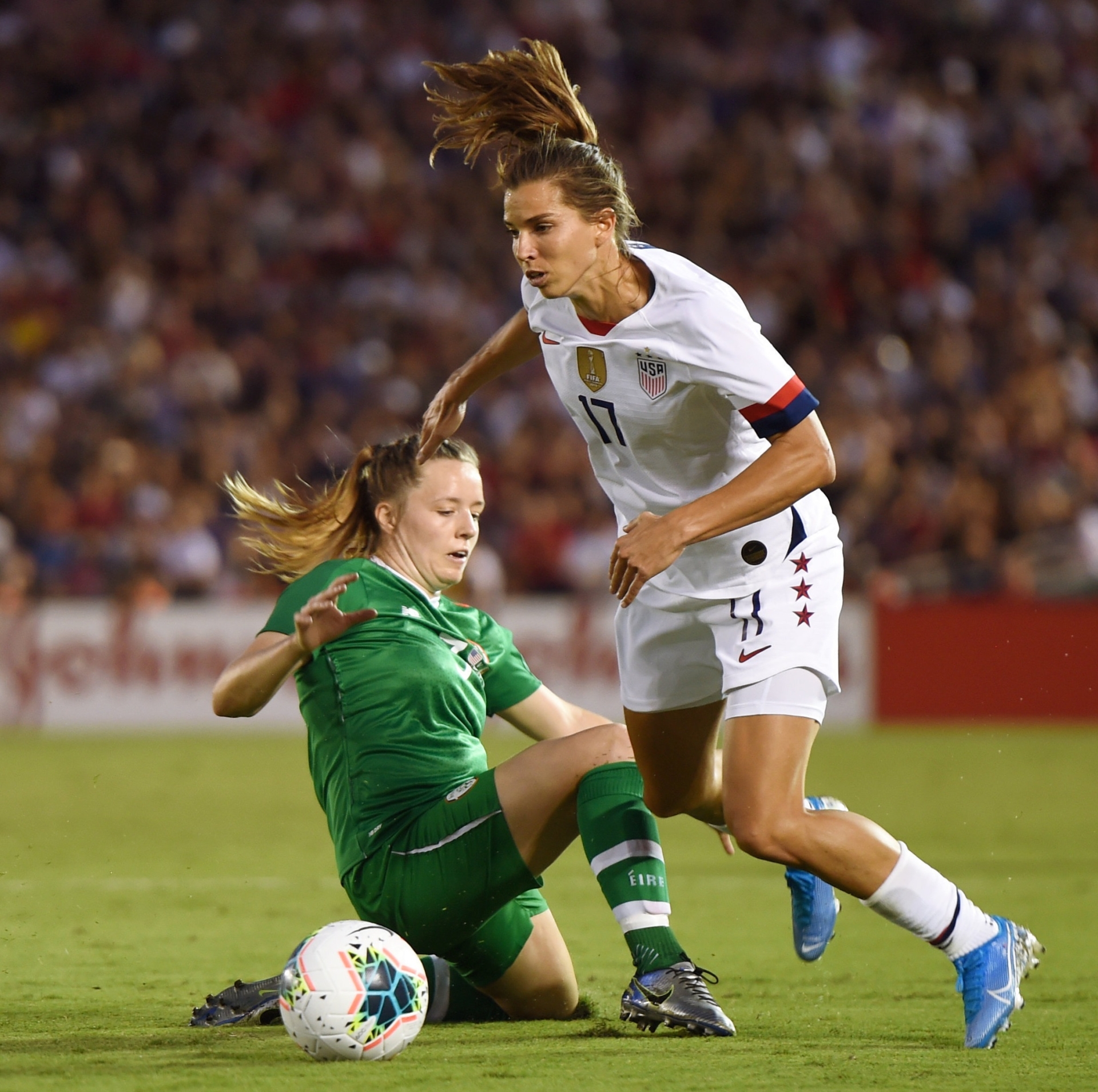 “When you look at the US team, they are a successful team with big players like Tobin Heath. She is such somebody I would look towards,” Niamh adds.
Her engineering background comes to the fore as she number crunches the rise of the game. The most watched game, the USA's 2-0 win over Holland in the 2019 World Cup Final had an increase of 56 percent in just four years.
Add in the Northern Ireland ladies' qualification for a first ever European Women's Championships. Local heroes. Niamh was starstruck when Northern Ireland ladies captain Marissa Callaghan came to DC Diamonds' first senior session recently.
“Those are the types of people, idols you'd want to be, those you see on the TV,” Niamh said, while remembering some of the advice.
“Marissa told us to aim to play on the Northern Ireland team. It is about having expectations and always wanting to better yourself....don't doubt yourself.”
The first session brought excitement. Others have declared an interest in joining the senior squad, coached by Chloe McPeake and Alice Bradley. Niamh will also weigh in with a helping hand.
“It was such a great session, they had it down to a tee,” Niamh stated. “It was a fun session, we played a fun and competitive game. There is a balance, it is recreational and there is a chance to play more seriously.”
Niamh urges others to come along. The door is open to everyone.
“I have made friends for life, people from America and England and just down the road,” she concludes of her soccer involvement so far.
“Even the confidence you get from being on a team, you build so much as a person and you are out there getting fit. It is a great release.
“It is a bit of fun and it can be competitive if you want. It is about getting out there, enjoying the game, the great game that it is.”

The Draperstown Celtic Senior Diamonds train every Sunday morning at 11.15am at the Back Row 3G pitch in Draperstown. Contact the club for more details.