2019 was about much more than senior success 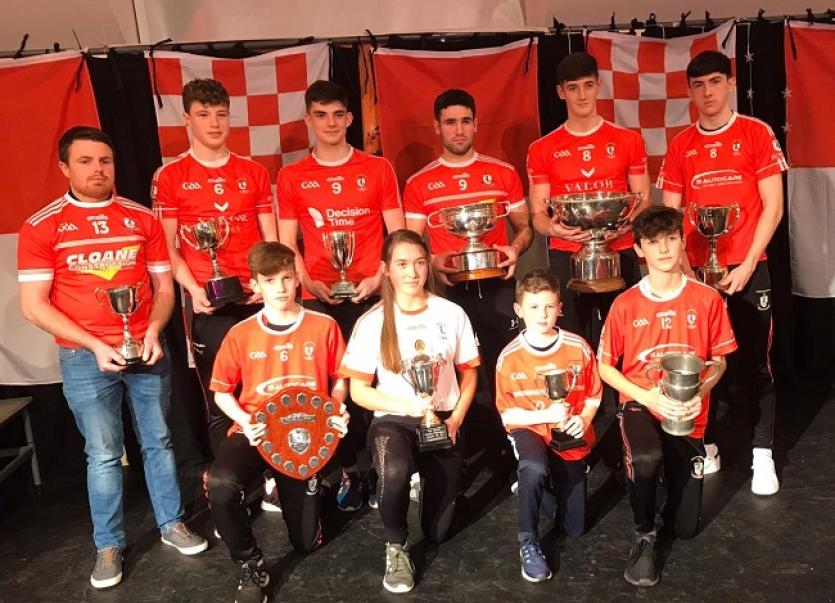 It's October 2019 and Antone McElhone is the last of Magherafelt's players to file off Celtic Park. Behind his boyish grin, he is consuming the fading remnants of county final Sunday.

It's all about savouring the scene where unforgettable memories were made. Every last second.

In his interview with the County Derry Post, the Rossa forward confesses to not having attended many county finals. They were a difficult watch, like running your eyes over the dream you may never have.

Now it's real and over the hours and days which follow, Magherafelt would deservedly celebrate like never before. The club's senior famine was over.

Three days later, McElhone would be back in the inner sanctum of a dressing room on final day, this time as a part of Enda Quinn's U16 management team.

In the midst of Monday night's celebrations, he had one eye on Lavey. They were going to be a tough assignment, he admitted. Any team with Matthew and Callum Downey on board was going to be a serious proposition. But, they'd give it a lash.

When game day arrived, conditions were difficult, but it was Magherafelt who prevailed, adding to their senior, reserve, U16 (boys and girls), U14 and U13 championships. Their U14, U16 and minor leagues were also added, on the back of being the current U21 champions – before withdrawing to concentrate on preparations for an Ulster clash with Kilcoo.

“The negative was, they (U16 team) didn't get their proper night's sleep the few days before a vital championship game,” states Enda Quinn, who doubles up as the club's current Youth Officer.

They were amidst the celebrations, looking on as their heroes brought home the John McLaughlin Cup.

“At the same time, you can't tell them to go home, because you may never see this in your lifetime again,” said Quinn, who had a son on the U16 squad.

“The positive was that it gives you the ammunition to go again, after seeing what success had done. The show of senior players at the (U16) final...to a man they were all there.

“They were coming down onto the field and they were making heroes out of our U16s for winning a championship, it was unbelievable.”

Eoin McEvoy and Aaron Murray picked up the Downey cousins. Earlier in the season McEvoy would anchor Ciaran Higgins' minor defence from number six. He has a huge future ahead of him.

Magherafelt went into the final without the services of Luke McCann who sustained a 'serious concussion' in their drawn semi-final with Dungiven.

“He was our full-back, he is a serious player and, last year, was playing on Derry U16s,” Quinn added, tipping him for this year's Derry minor team.

Before a ball was kicked, Magherafelt's chief rivals were Bellaghy and Lavey. However, Dungiven turned out to be the secret assassin after making progress during the season.

“When you saw the quality in the forward line, I wasn't overly surprised at it,” Quinn admits. “The highlight of our season was the replay against Dungiven. We were six points down, a man down, we were without Luke McCann and went on to beat them by six points in extra-time. To me, that was the watershed moment.”

At minor level, Magherafelt won the league and pushed eventual Ulster champions Lavey every step of the way in the championship. From that squad, Eoghan Hawe and Johnny McErlain, along with players like Aidan McCluskey and Shea McGuckin - who are still eligible for club minors in 2020 - will step into senior football next season.

“We had a wide with the last kick and they (Lavey) got a goal with a minute or two to go and us two points up. It could've went either way and they went on to win Ulster, so at least you know you are there or thereabouts.”

Above the minor grade, Quinn hailed their U21 crop that would add to Adrian Cush's senior plans. Some of them had won Ulster minor medals with Derry and helped bring the MacRory Cup to St Mary's Magherafelt for the first time.

Below, at U14 level, Magherafelt lost to Dungiven in the Féile final, but returned to clinch the league and championship double.

“That was a big achievement there,” said Quinn, who spent countless years with Magherafelt youth teams.

After chatting to a handful of Dungiven Gaels, they came to an agreement. Magherafelt were unlucky in the Féile and lucky in the championship. It balanced itself out.

Though they had to win the championship without 'one of the best' U14 players in the county, Cahir Spiers, who was dismissed in their convincing semi-final win over Bellaghy.

This season's Féile has since been cancelled, but Magherafelt would've be front runners again after winning the U13 championship at the tail end of last season and sharing the U13 AB competition, one for clubs who can field a second team.

Magherafelt won the U16 ladies championship

It was also a year to remember for the club's U16 ladies. In 2018, they joined the boys in bringing home All-Ireland Féile.

“The girls came through after a really tight ding-duster with Ballinascreen. They have put in savage work and the year before had won the All-Ireland Féile as well as the boys.”

Their season had a positive impact on all ages of club activity, but it was the manner of their senior football win that will leave the greatest legacy and a winning culture.

Enda Quinn's thoughts rush back to the start of the story. The championship draw was made on a Thursday night and for the second year in a row, they were pulled out to face the county champions, this time it was Coleraine.

“On the Friday night we lost our best player, Michael McEvoy, to a cruciate injury,” Quinn adds.

“I don't care what anybody says, your championship draw is everything. When you draw Slaughtneil or Coleraine, it is a downer.”

He doesn't buy into needing to beat the best in the first round, it is all about getting a favourable draw.

Aside from a comfortable win over Ballinascreen, the Rossa won their other three games by a point

“The Coleraine game, they were reasonably in control of it until Emmett (McGuckin) scored the goal. The Banagher game, if it had went on a another five minutes, they could've won it.

“We were playing champagne football for the first 10 minutes and going six or seven points up, we looked like we could've won convincingly. At that stage, I thought we'd win this game and really be in a position to compete with whoever came through the other semi-final.

“Until we beat a Slaughtneil, Coleraine or Ballinderry, somebody like that, in the championship we weren't serious contenders.

“We dominated the final and we will be a better team for that. Plus, the fact you have Michael McEvoy back, as well as Peter Quinn and Ryan Ferris coming in.”

During his own playing career, Quinn played at corner back up through the ranks before getting to senior. By that point, the spine of his team had drifted away.

Now, breaking onto the senior team is a different proposition.

“Our retention of players is excellent at the minute, but it is now a case of 'how we get them all football' that we need to look at.”

Every year their senior squad has grown, bit by bit. Quinn looks back to their 2007 All-Ireland Féile winning team. Fergal Duffin, Antone McElhone and Shane Heavron have graduated to senior level, while another 5-6 were on the this year’s reserve winning team.

“In 2010 a good chunk of that team won a minor championship and were beat in the final at St Paul's. We have won four out of the last six Féile titles.”

Quinn still ranks Slaughtneil as the best (senior) team in Derry and refers to them doing so without a plethora of underage 'A' titles.

Beating Coleraine last season should be the beginning of a regular Magherafelt assault on the senior championship and 'something like 60' players at the first senior meeting of the season radiates the enthusiasm. Some will drift, but most will stay.

“Nearly every one of our senior team has won something at underage, be it a Féile, an U16 or a minor championship. When you are producing player after player, it gives you a better chance.

“Like a lot of clubs, we have put a huge effort into our underage structures over the years and this is now starting to pay off.”

Away from the pitch, coronavirus – like in all clubs – has put a stop to all activity.

“I know the word is overused, but the buzz around the club was unbelievable (after championship win). We just hope when the whole thing is back up and running again, that the buzz is still there. It was a fantastic opportunity for us to really push on from there.”

Magherafelt had 500 tickets sold for last Saturday's 'Champions' Dinner', which had to be postponed. It was ignited as a night of celebration for the senior and reserve team.

It wasn't like the 'average gala' with tables being sold for outsiders to wine and dine a table of strangers, in a fundraising capacity. It was a Magherafelt night for their own.

“This was going to be the biggest ever gathering of Magherafelt people,” Quinn said.

Getting a new date is the club's plan. It's not that easy. When the current pandemic ends, fixtures will take priority, though the club are 'really determined' to hold the function at some point during 2020.

The recent upgrade of the club's gym shows the commitment placed in the senior team. There is a thirst for more success. For the underage talent to have their glory days at a packed Celtic Park.

“We are in a good place,” Quinn begins to conclude. “2019 was a fairytale. At the start of the year, you wouldn't dared to dream as high as that, in my opinion.

“You have to lap it up and you have to enjoy it. In 2020 you could win nothing and you may not win a senior championship for another 41 years. Who knows...but you'd sincerely hope not.

“We are in a good place, from a footballing point of view and from a club point of view this has been a huge gelling experience. You are a town club and it is hard to have the same level of camaraderie because it is so spread and there are so many things going on, but 2019 has done an awful lot for us as a club.”

The year was capped off when the Gerry Crossan Memorial Trophy was awarded, as Derry club of the year, at the annual Derry GAA presentation function in Tullyglass. Not a single soul in the function room could disagree. It was the icing on the cake.

The Food Warehouse is to open an outlet at the Crescent Link Retail Park.

The local port had a turnover of £10.4m in the last financial year.