The feature has been created by two local men. 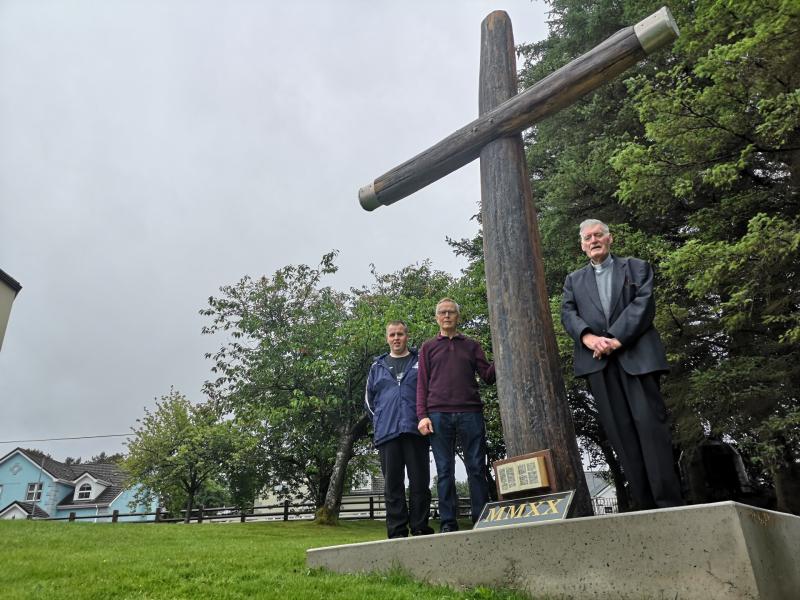 A County Derry parish has a new feature in its cemetery after some innovative thinking from local parishioners.

Visitors to the graveyard at St Peter's and St Paul's Church in Foreglen will have noticed a brand new 15-foot cross erected on its eastern end.

The cross is the handiwork of local men Eugene Brolly and Cathal McCullagh, but the production of the raw material was much more serendipitous. 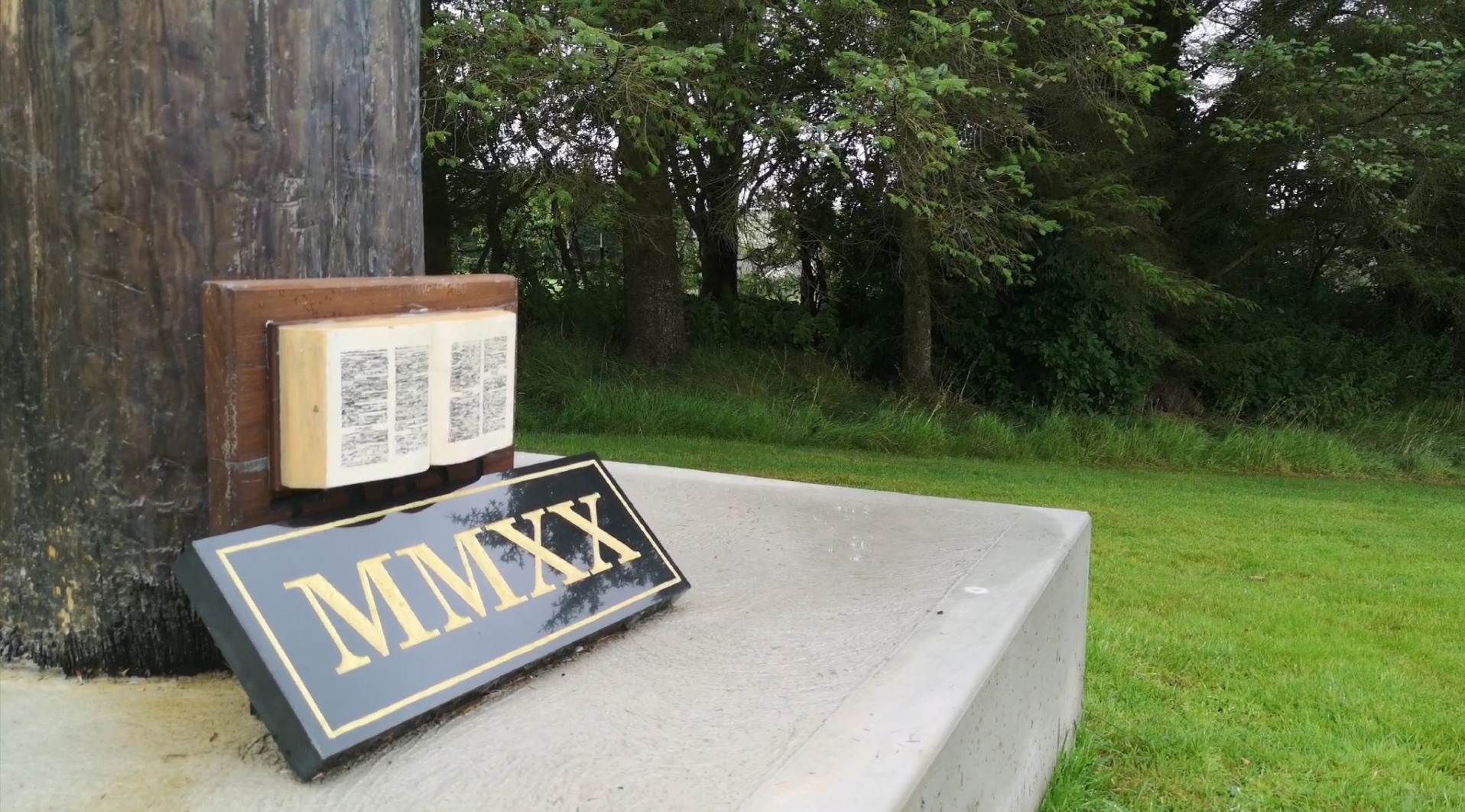 The year of the cross' erection has been carved into the plinth.

“There is a marsh down there beyond the trees,” parish curate Fr Art O'Reilly told the County Derry Post.

“When they were excavating the ground to make a foundation for the new bypass, they discovered this huge big pine tree.

“Hugh and Eugene made it into a cross. They were going to put it up along the bypass but the authorities thought it would be too much of a distraction for traffic going past.

“So they asked me if they could erect it here. I consulted the parish priest and he gave the go ahead.”

Fr McGavigan gave the nod and the cross was duly erected, embellished with a tablet designed by the late Kevin Heaney of Dungiven and Artist Margaret O'Connor.

The year of its discovery, 2020 (MMXX) has been sculpted in Roman numerals by Michael Hogg from Limavady at the foot of the cross.

The concrete plinth in which the cross is set was designed by Dermot O'Connor, and constructed by Shane McLaughlin, Kevin Kelly and Sean McKillop. 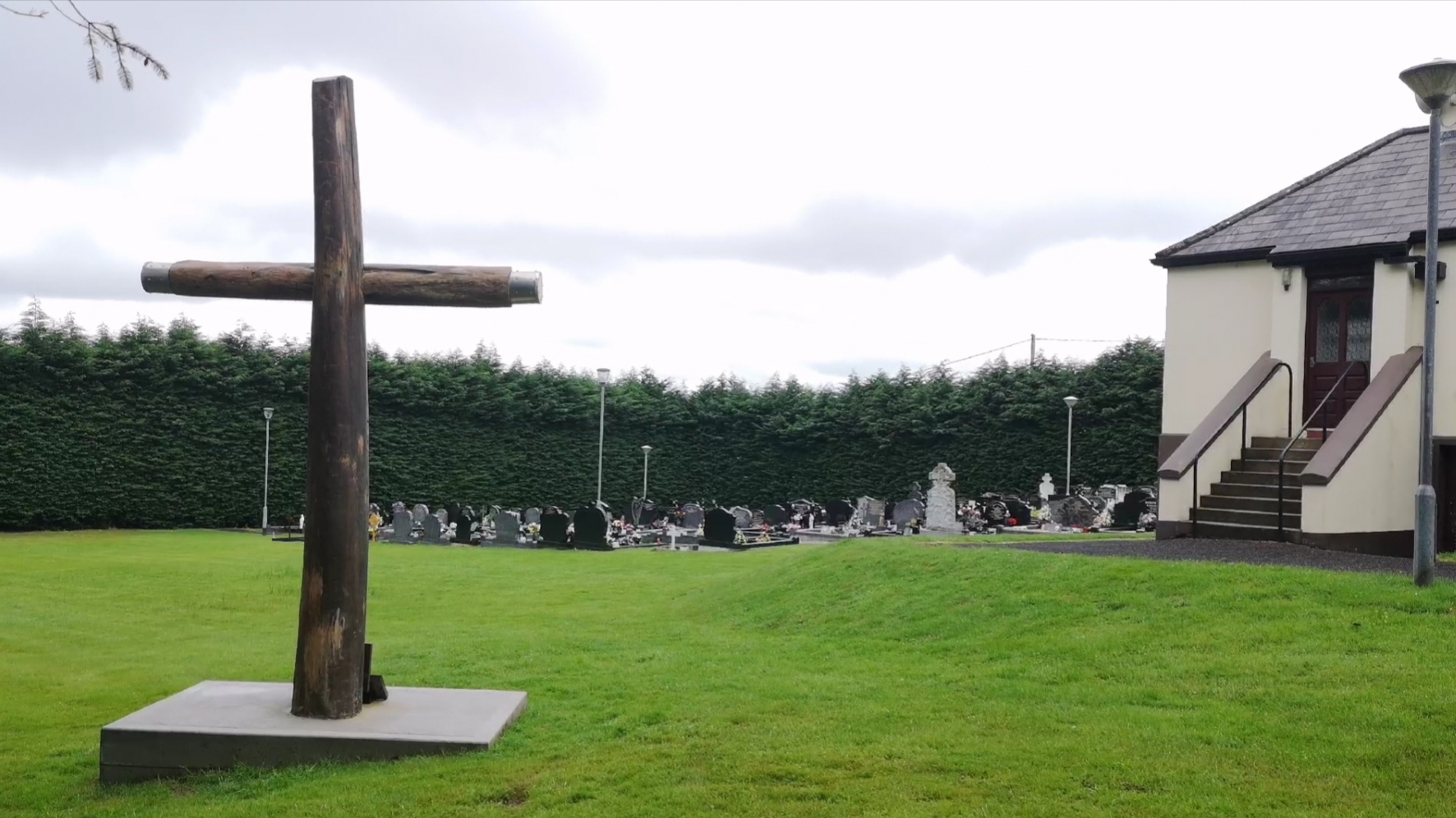 The cross overlooking the graves in Foreglen.

A ceremony was held on Sunday June 30 to bless the cross, and Aoife Moore, accompanied by Jerry Canning on the accordion, treated the crowd to a very suitable hymn.

“The parish priest blessed it and we had a choir here and a woman singing 'The Old Rugged Cross,” said Fr O'Reilly.

“She said the simplicity of it was great. There is no ornamentation, or figure on it, it's so simple, overlooking the graves of Foreglen.

“She said it was very striking and I agreed with her; it's very impressive. In the evening when the sun strikes it, it's even more impressive.”

The eye-catching feature is winning admirers, both young and old.

“The parishioners are all very pleased with it,” said Fr O'Reilly.

“A little boy of only six years of age was passing by one day with his parents and said 'Father, I like your new cross'.

“Even a child at that age was impressed, which is remarkable.

“The people are all delighted with it and it's a great feature against the background of the trees.”

The O'Brien's men recorded a four-point in in Division 1B.