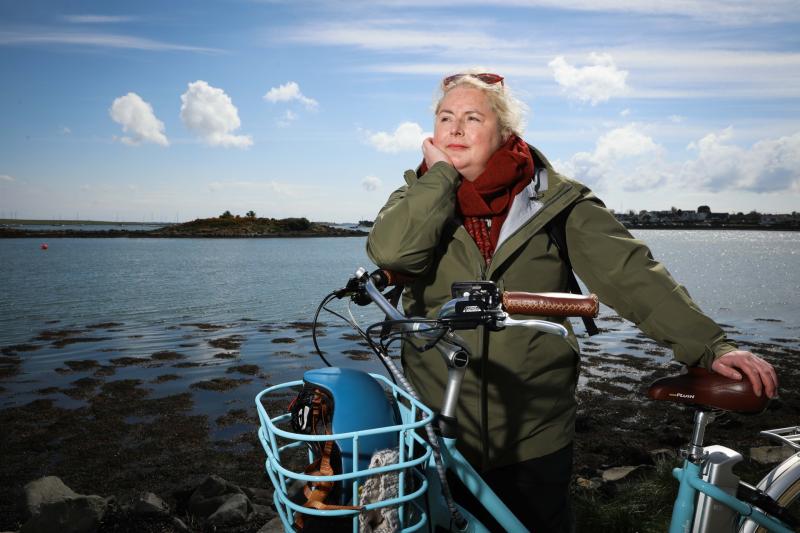 Siobhán McSweeney, a star of Channel 4’s Derry Girls in her role as Sister Michael, had barely set foot in Northern Ireland before filming the hit comedy show.

After falling in love with the landscape she’s taking to her electric bike to explore more of the lakes, mountains, coastline and forests for this new four-part series by Waddell Media which starts on More4 on Thursday, August 12, at 9pm.

Siobhán’s affectionate and mischievous take on the province brings her to places such as Strangford Lough, the Mourne Mountains, the Fermanagh Lakelands, the Sperrins and the rugged Causeway Coast to find out more about these rural landscapes, historical homes and the fascinating people who live and work there.

She also makes a return to Derry in the new series.

In the first episode Siobhán discovers some hidden gems in Northern Ireland’s Co. Down. She follows the footsteps of pilgrims along St. Patrick’s Way, comes face to face with some vicious Vikings, gets a bird’s eye view of stunning Strangford Lough, reveals her artistic side with acclaimed artist Colin Davidson, samples regency life in an 18th century mansion, and, in Belfast, Siobhán conquers her fear of heights at one of the city’s iconic landmarks.

Siobhán continues her exploration of Northern Ireland on her electric bike. This week she is bowled over by the beauty of the Mourne Mountains, she meets a fascinating moth expert in Murlough Bay, discovers the joys of sea swimming in the resort town of Newcastle, has an astronomical time at the Armagh Planetarium and encounters some masked mummers.

Siobhán abandons her electric bike for a hydrobike to explore the island town of Enniskillen. She descends underground to experience the caves of a National Geopark, steps closer to heaven on the Cuilcagh Mountain Boardwalk, goes native at the Beaghmore Stone Circles, discovers the ancient monuments of Lough Erne and meets a man about a sheepdog in the spectacular Sperrins.

In the final episode Siobhán takes her electric bike to explore Northern Ireland’s stunning causeway coast. She tries her hand at an ancient sport where history and mythology meet, jumps out of her comfort zone with some cliff activities, whacks a ball or two at the Royal Portrush Golf Club, revels in the birdlife of Rathlin Island and returns to Derry where her adventure into Northern Ireland began.

Jannine Waddell, Managing Director, Waddell Media said: “Viewers are in for a real treat as Siobhán immerses herself well and truly into Northern Ireland’s great outdoors.

“She’s not afraid to try her hand at some weird and wacky activities as she travels across Ulster on her electric bike, giving us a unique insight into the people she meets on her journey as well as taking in the stunning scenery on offer.”