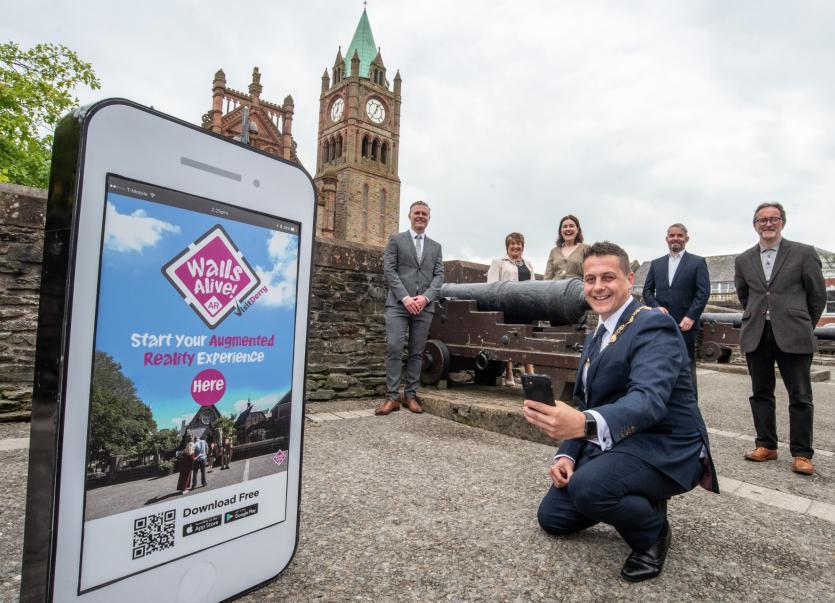 Mayor Graham Warke and guests pictured last week at the launch of the new app.

Concerns have been raised about the impact that a new app for Derry's Walls will have on the local tourism sector.

The free app was launched by Derry City and Strabane District Council last week in partnership with Visit Derry.

Visitors to the Walls can now download the app free of charge to their phones and view information about 10 different points around the historic site.

However, it emerged today that the app is already having a detrimental impact on one local guide who makes their living from providing tours of the Walls.

Speaking at a meeting of the council's Business and Culture committee, Ulster Unionist councillor Darren Guy said he had been contacted by a tour guide with concerns about the new app.

Cllr Guy said the guide had spent 'a lot of money' to produce audio tours of the Walls.

However, Cllr Guy said that after the release of the new app, the guide was contacted by a group who had booked his audio tours to say that they were cancelling because they 'could now get the information for free' through the app.

Cllr Guy said local tour guides pay a membership fee of £180 per year to Visit Derry to benefit from the organisation's support.

He asked council officers and Visit Derry to monitor if there were any further cancellations of tour bookings and to assess how the launch of the app would impact guided tours around the Walls over the summer.

Cllr Guy suggested adding a 'small fee' to the new app and said this money could be used to reduce the membership costs for tour guides if the app is going to affect their business.

Aeidin McCarter, the council's Head of Culture, told the meeting that the tour guide in question had been in contact with both the council and Visit Derry and she added that the organisations had offered to meet the guide.

“It (the app) shouldn't be affecting tour guides and if it is there is probably something that we can do in relation to the communication about the facilities that are available on the app.

“We are aware of the issue and we are trying to get a meeting with the particular tour guide in question.

“It shouldn't be affecting their business and if it is it is something we need to look at and we are happy to do that.”

Ms McCarter said she would keep councillors updated on the situation.