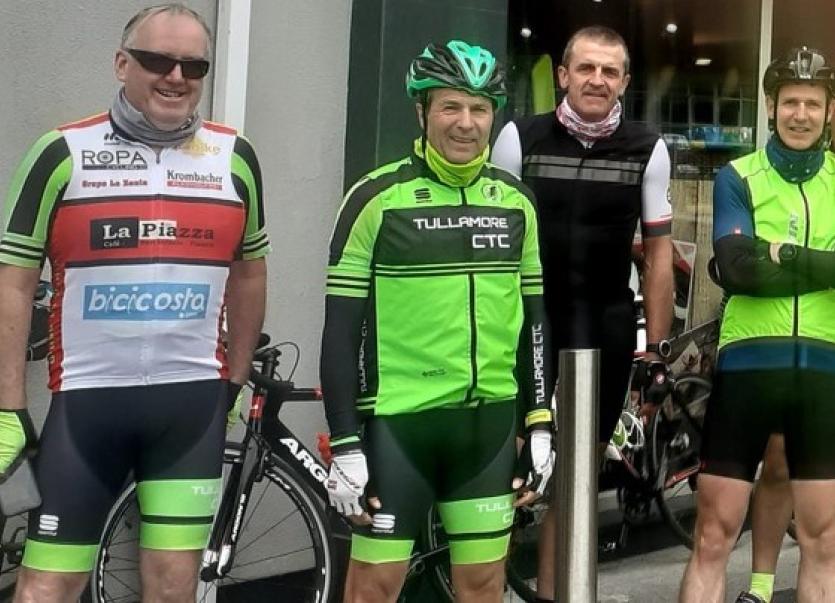 John O'Brien, third from left, is taking on the Mizen to Malin challenge.

A Derry man set off this morning on a tough cycling to raise money for two charities.

John O'Brien is originally from County Laois but has lived in Derry for 20 years with his wife Reba and family.

John and two friends are aiming to cycle from Mizen Head in County Cork to Malin Head in Donegal in just two days.

John is taking on the challenge to raise money for two charities which work to raise awareness of Duchenne Muscular Dystrophy, a life-limiting condition which mainly affects boys and for which there is currently no cure.

The charities to benefit from the fundraising cycle are Action Duchenne, which raises money to support efforts to find a cure for the condition, and Join Our Boys, a Roscommon-based charity which was set up in 2014 to support a local couple whose three sons all have Duchenne.

John has been joined on the all-Ireland cycle by Adrian Martin from County Offaly and Tipperary man Seamus Duggan.

They set off from Mizen Head at 7am this morning and are aiming to reach Malin Head by 6pm tomorrow.

They will pass through Derry on the last stage of their journey.

John, who is 52, said he had always enjoyed cycling but started taking it more serious during the first lockdown period last year.

He previously completed the Mizen Head to Malin Head route in five days last summer to raise money for Foyle Search and Rescue.

However, he said he was looking forward to trying to complete it in just two days.

“It will be tough but we have been training very hard and we're looking forward to it,” he said.

“The aim is to raise as much money as possible for the two charities and to raise awareness about Duchenne Muscular Dystrophy because so many people know nothing about the condition.”

Derry teenager Niall O'Doherty, who is 14 years-old, has Duchenne and his family have raised thousands of pounds to support the work of Action Duchenne.

Niall's mother, Deborah, said they were touched that John would be raising even more money for the charity through the cycling challenge.

“We are so appreciative of people like John who go out of their way to support us and other families affected by this condition.

“As well as raising money for Action Duchenne, it will also help raise awareness of Duchenne Muscular Dystrophy.

“It is a condition which affects a lot of families throughout Ireland but most people know very little about it.”

You can donate to support John's efforts here - https://bit.ly/3qMidDi

John is not the only local man taking on a massive challenge this year to raise money for Action Duchenne.

Local doctor Gavin McAteer is planning to run from Mizen Head to Malin Head over six days in September.

Dr McAteer, who is a GP at Quayside Medical Centre, is aiming to run 10 hours a day covering between 60 and 70 miles each day.

The money raised by the 43-year-old will be donated to two charities – Action Duchenne and Top of the Hill Youth and Community Group.

Dr McAteer's son has played football with Top of the Hill for the past eight years.

The local doctor will set off from Mizen Head on September 6.

The plan is for the epic run to finish at Malin Head on Saturday, September 11.

Anyone who would like to support the fundraising events can contact Deborah O'Doherty for more details on 07927400670.